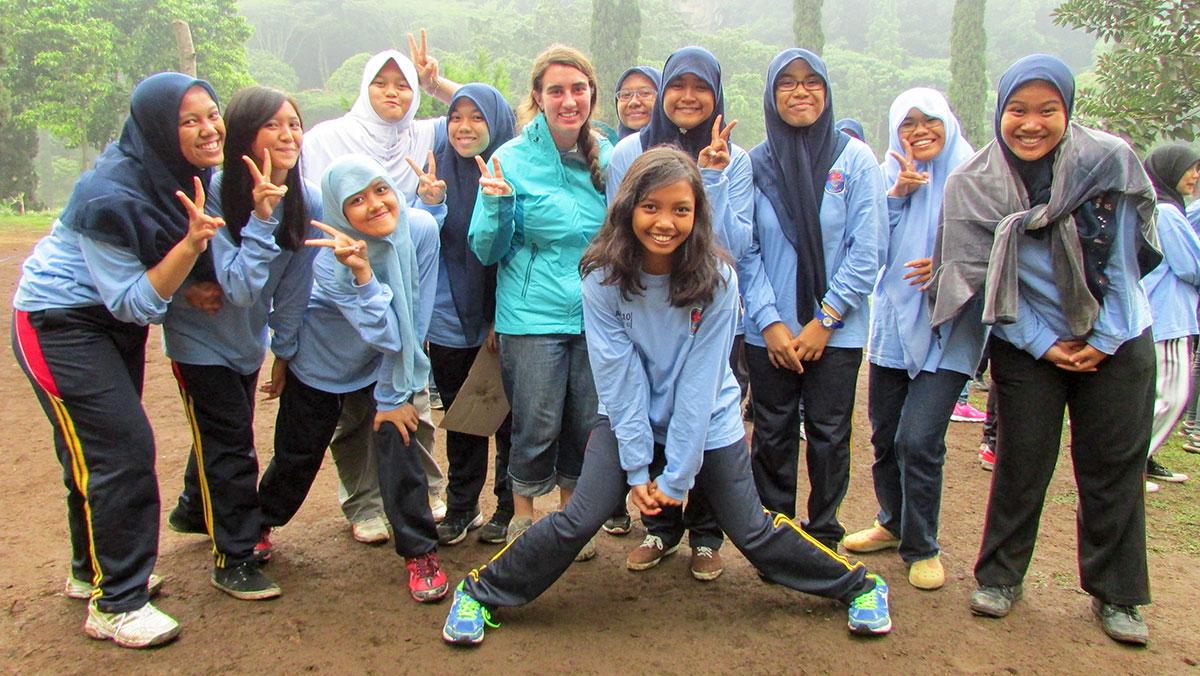 Courtesy of Grace Wivell
Grace Wivell '14 takes her class of tenth graders on a day trip to Batu, Indonesia in November 2014 on an excursion she calls "English Camp."
By Ahana Dave — Contributing Writer
Published: February 4, 2015

Operating in over 155 countries, with 53 program alumni who have received the Nobel Peace Prize and 78 who have received Pulitzer Prizes, the Fulbright Program has selected three recent Ithaca College graduates to work in different parts of the world through the 2014–15 Fulbright award.

Wivell, who began teaching in August 2014 at a high school in Malang in Indonesia’s East Java province, said she was drawn to Indonesia because of her interest in eventually becoming an English as a second language teacher in the United States. She said she knew very little Bahasa, the national language of Indonesia, when she first arrived in the country but has managed to pick up on the language and as a result learned more about the culture.

“It’s been a whole journey,” Wivell said. “The first time I called for a taxi here, they hung up on me because I couldn’t get enough of the language out to communicate what I needed, and now I can call just fine and hold most conversations. I’ve had experiences of just sitting in a little booth with a woman drinking es kelapa muda, or chilled coconut water, and trying to have a conversation about where we both come from.”

Wivell said she teaches students with a wide range of command over English. In the classroom, she said, she focuses on more of the speaking aspect — pronunciation and projection — of the English language, while an Indonesian teacher teaches the grammar and structure of the language.

“When I first came here, [some students] would just fumble through a response, and I also had students who had learned English before Bahasa,” Wivell said. “So I plan a lot of the activities relating to students actually using the language in order to create an authentic classroom experience.”

Wivell is considering reapplying for a Fulbright grant to stay in Indonesia for another year before beginning graduate school at Stony Brook University in Stony Brook, New York, to study applied linguistics.

Derek Adams, assistant professor in the Department of English and one of Wivell’s former professors, said she demonstrated the potential to be a Fulbright scholar early on in the classroom. He also said it is extremely important for students to go abroad or apply to be a Fulbrighter.

“It is monumental, only because the world itself is becoming much more globally connected, and so getting out there and meeting people from other cultures, learning to immerse yourself in different culture, is about the best possible thing you can do in our world today,” Adams said.

Meanwhile, Gonzalez, who holds a degree in culture and communication from the college, is preparing to travel to Belo Horizonte, Brazil, in March where she will be teaching at the Universidade Federal de Minas Gerais. She is currently attending graduate school at Villanova University studying communications.

Robert Sullivan, associate professor and chair in the Department of Communication Studies, has worked closely with prospective Fulbright scholars such as Gonzalez and said studying abroad helped prepare her for her upcoming experience.

“Gabby is a wonderful person — she really extended herself while she was here at IC,” he said. “She studied abroad in Brazil. The study abroad was absolutely crucial — it opened the door for her to apply for a Fulbright specific to Brazil.”

Lowry, who graduated with a degree in cinema and photography, left for Kolkata, India, in August 2014 for a nine-month stay. He is making a documentary film about a group of artisans as they create images for Durga Puja, an annual Hindu festival, according to the website of the United States-India Educational Foundation.

The application for the program is a long and competitive process, Sullivan said. Applicants have to go through three levels of approval, beginning with a rigorous on-campus interview conducted by a committee that will determine whether the college will support the student’s effort. This approval is then sent to the state department, which decides whether the student is going to be chosen, and finally, the host country to which the student has applied ultimately accepts the application.

“To do a really good Fulbright application takes almost a full year, so you have to be thinking about it at the beginning of your junior year because the application has to be in by September of your senior year,” Sullivan said. “You don’t just get these just because of a faculty recommendation, you get these because of a powerful case that you are going to do something really important and interesting.”

Ithaca College has established itself as a “top producer of Fulbright students,” an accomplishment highlighted by the Chronicle of Higher Education when the college delivered the most student Fulbright award winners in 2013–14, according to a report from the Chronicle in October 2013. This recognition placed the college in fifth place among master level institutions across the country for producing Fulbrights. Over the past ten years, 17 Ithaca College students have received Fulbrights.

“Ithaca [College] is one of the most successful schools of its type for receiving Fulbright,” Sullivan said. “The college should be very proud.”