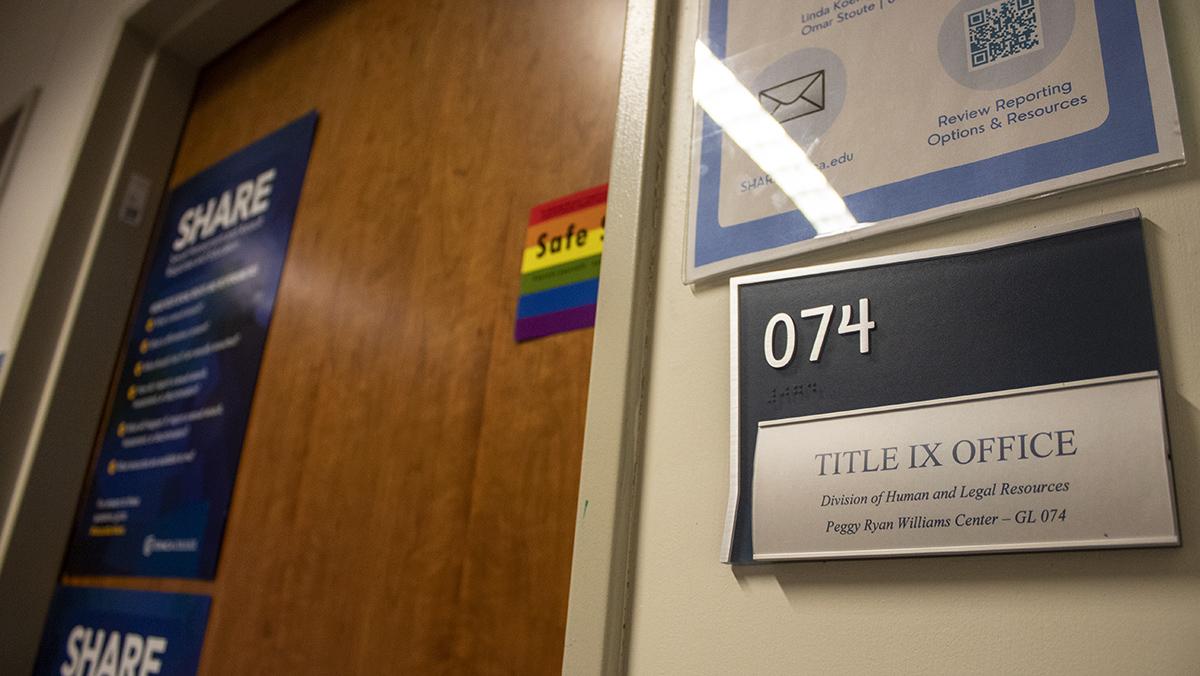 Malik Clement/The Ithacan
The college’s Title IX office notified the campus community of the update Dec. 10, 2021. The update allows for all evidence to be considered during a live hearing whether or not a party or witness is absent.
By Lorien Tyne — Assistant News Editor
Published: January 31, 2022

A recent policy update to the U.S. Department of Education’s (DOE) Title IX process will better support Ithaca College students with trauma-related needs during the legal process of a hearing.

The college’s Title IX office notified the campus community of the update Dec. 10, 2021. The update allows for all evidence to be considered during a live hearing whether or not a party or witness is absent. In the past, the DOE stated that if either the complainant, respondent or a witness did not attend the hearing, the Title IX office would not be able to use any of the evidence the absent party submitted during the investigative process.

Linda Koenig, Title IX coordinator in the Department of Legal Affairs at the college, said she views this as a positive change to the procedure. Koenig said the goal of the Title IX office is to collect as much information as possible during the investigation so that there are very few questions during the hearing.

In May 2020, the administration of former President Donald Trump weakened parts of the Title IX law that protects students from sexual harassment. The rule was enacted by then-United States Secretary of Education, Betsy DeVos. The rule — often called the DeVos rule – discouraged reporting, minimized the responsibility of schools to respond to reports and implemented possibly distressing procedures, according to the National Women’s Law Center (NWLC).

The NWLC filed a lawsuit against the DOE and DeVos in June 2020 to amend the DeVos rule. The trial occurred in November 2020. However, DeVos was later substituted by the defendant Miguel Cardona, after President Joe Biden appointed him to replace DeVos as Secretary of the Education. On July 28, 2021, William Young, a federal district judge, annulled part of the DeVos rule called the “the exclusionary rule,” which requires colleges to exclude all testimony made by any party or witness who did not participate during the live hearing. If a survivor was too afraid to go to the hearing or was unavailable, no evidence — including text messages, emails, rape kits and police reports — could be considered. Additionally, if the respondent confessed during investigation but refused to be cross-examined, that statement would be excluded from the evidence.

Senior Sarah Moon is the co-president of IC Strike, a student organization on campus that works to center education, activism and allyship for survivors of sexual assault and violence. Moon said the updates to the Title IX policy may help people feel more comfortable with bringing a case to court.

“When a survivor has to make a choice on whether or not they want to proceed with reporting, on whatever level, it can be a very traumatic process,” Moon said. “It forces them to relive the experience and oftentimes [they] are asked to explain what happened over and over again.”

Amy Whitney, mental health counselor in the Center for Counseling, Health and Wellness, is one of the Title IX liaisons at Counseling and Psychiatric Services (CAPS). She said the Title IX office and CAPS often work together to share resources and refer students to each other.

“I’m really glad for the changes myself because I think they do bring things back into more alignment with trauma informed practices, where things like choice, collaboration and transparency are [involved in] the process,” Whitney said.

However, Young did not remove all parts of the DeVos rule. According to the NWLC, the DOE has indicated that it plans to propose a new Title IX rule in May 2022. The DOE held five days of virtual hearings in June 2021 to hear feedback from citizens on how the DOE should address the reassessment of Title IX, but so far it has not published any documents outlining the proposed regulations.

The process of implementing the DeVos rule took 21 months after its initial proposal, and activists and organizations are urging quick action in the passing of a new Title IX rule.

Moon said conversations about Title IX in IC Strike meetings include discussing campus, local and national resources. She said the group also talks about the reporting process which can be through the criminal justice system or through campus-based reporting –– neither of which require that a court case be made.

“I think the DeVos rule makes it more difficult for survivors to come forward and to report instances of assault, while also straining school administrations, which could lead to improper investigations,” Moon said. “A new Title IX rule [would] allows survivors more protection than before and could lead to more survivors feeling comfortable reporting sexual violence.”

Whitney said her understanding is that the Title IX update was made as a result of citizens who were either advocates or survivors themselves giving feedback and sharing their thoughts about the DeVos rule.

“I think it really is important that within our community, we really think about the [Title IX] process and how we want to do that as a school and community and that that’s an ongoing dialogue,” Whitney said. “I really want to encourage people, if you know something that would work better for you. If you have some insight that your community needs, there are lots of ways to share that.”