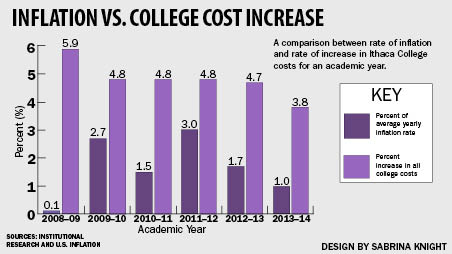 This academic year, 52 institutions of higher education in the U.S. froze or cut their tuitions. Elmira College, located about 30 miles from Ithaca, froze its tuition for the 2013–14 year. In October, Elmira announced it will freeze tuition again in 2014–15.

Freezing tuition means that an institution of higher education chooses to keep its costs at the current rate rather than increasing it by a small percentage to adjust for the recent inflation rates.

Gerald Hector, vice president for finance and administration at Ithaca College, said Ithaca College will not freeze its tuition, but rather continue trying to decrease operational costs in order to avoid tuition spikes. In general, tuition costs are increasing in line with inflation rates to maintain the quality of the education the college provides. Hector said the college is working on reducing costs based on recommendations from the Huron Reviews last year.

Mike Rogers, vice president of government relations and chief of staff at Elmira College, said his college’s motivation to freeze its tuition is to encourage upperclassmen to stay on track to complete their degrees at the college in four years. Rogers said cost is a primary reason for families to keep investing in education at Elmira.

“We are keeping more students because we are not increasing the charge,” Rogers said. “From a business standpoint and a budgeting standpoint, if we can count on having more students that are here and that can be successful, that’s how we pay for it.”

For nearby Ithaca College, Hector said the college has considered freezing its tuition before, but it is unreasonable for the college to implement a freeze for several reasons, mainly that it is not in the long-term interest of the students.

“The approach taken at IC of consistent reductions in the rate of tuition increase enables us to focus on affordability while continuing to grow our commitment to scholarship and investment in educational quality,” Hector said.

Attracting prospective students is the most significant reason for why the college will not freeze tuition, Hector said. He also said increasing tuition slowly each year is better in the long run than freezing tuition. Institutions that freeze tuition for two or three years experience a short-term gain, however, they will need to increase tuition by a greater margin to maintain the same education quality in the long term.

A tuition freeze or reduction at Ithaca College would make the cost of education significantly more expensive for incoming students because the college would need to make up for costs incurred during this period, Hector said. This decision was made so the quality of education is not sacrificed just to keep the costs of attending college low. Keeping tuition costs consistent could force the college to cut programs, which could therefore reduce the quality of an Ithaca College education.

“Primarily what happens a lot is you can’t make it up, but your college or institution continually has to run, so you’re not covering the inflation aspects of it, and you’re going to try to cover the cost that the vendors’ inflation is going to push on you,” Hector said.

Bill Kolberg, associate professor and chair of the Department of Economics, said inflation is low now, but it is constantly changing, which affects how much the college’s tuition is in line with nationwide financial trends.

“Inflation in 2012 was running around 3 percent,” Kolberg said. “Now, it’s pretty low, anywhere between 1.5–2 percent — that was as recent as July 2013. It takes time to actually digest all this information.”

Elia Kacapyr ’78, professor of economics, said costs for all institutions are determined by a national inflation rate, which is calculated using the consumer price index based on what products consumers buy. As inflation for products increases, tuition grows at a similar rate because the college and its constituents are also consumers.

Kacapyr said it makes sense that the college’s costs are increasing because the quality of education has increased. Since Kacapyr attended the college in the late 1970s, students have more opportunities available to them, mostly extracurricular activities. These additional programs parallel the increased costs of attending the college.

“One reason that prices can rise is because the quality of the product has increased, and I think that explains a big part of the tuition rise across the country today,” Kacapyr said. “I graduated in 1978, and the product that I had is not even comparable to the product that today’s college students have.”