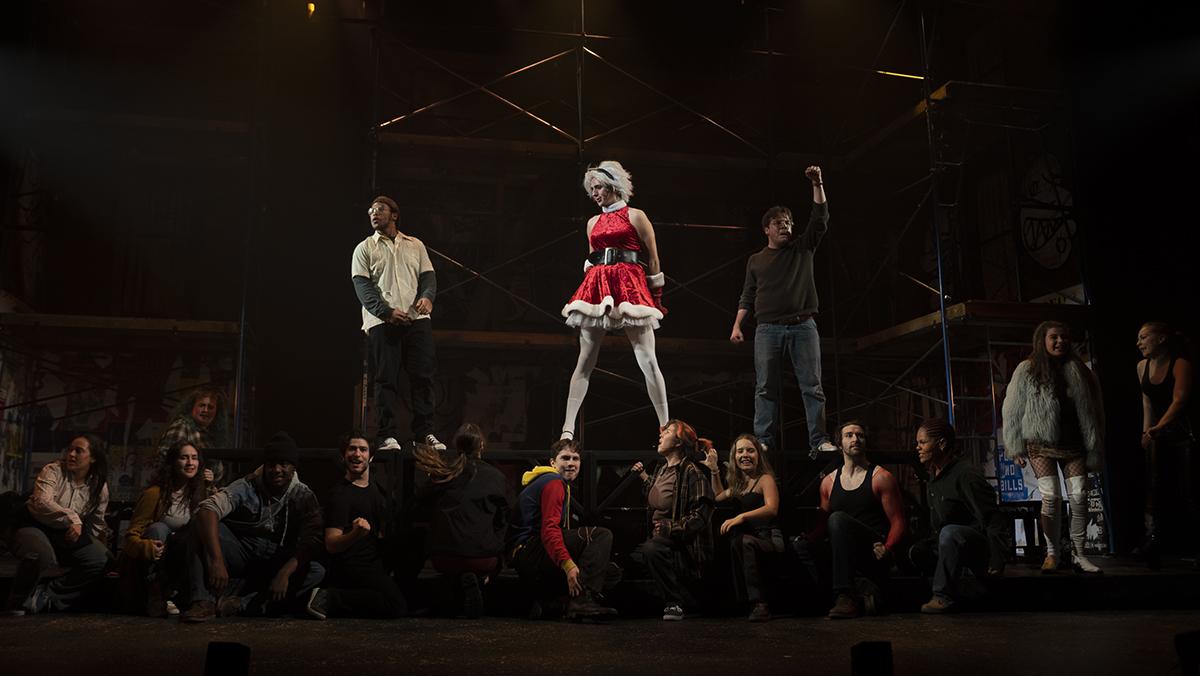 Kevin Yu/The Ithacan
In the announcement, the department said some members of the cast had tested positive for COVID-19 and the office of the chair of the Department of Theatre Arts decided the performances could not logistically be done with the limited cast.
By Elijah de Castro — Assistant Life and Culture Editor
Published: November 17, 2021

The Ithaca College Department of Theatre Arts canceled he Nov. 18 performance of “RENT” because of COVID-19 cases. In an announcement, the department said it would not be able to logistically have the performance. Nov. 18 was the last day of “RENT” performances.

The Ithaca College Department of Theatre Arts announced Nov. 16 that the performances of “RENT” on Nov. 16 and 17 have been canceled, after some of the cast tested positive for COVID-19.

In the announcement, the department said some members of the cast had tested positive for COVID-19 and the office of the chair of the Department of Theatre Arts decided the performances could not logistically be done with the limited cast.

The show has been taking place in Hoerner Theatre, which seats up to 500 people. Individuals with tickets for either show can call the Box Office at (607) 274-3224 from noon to 3 p.m. Monday through Friday to discuss options for ticket refunds or a credit for a future show or potentially getting a ticket for RENT’s closing show Nov. 18.

The Department of Theatre Arts requires that face coverings be worn at all times for in-person instruction as well as for live performances and audiences, regardless of vaccination status. However, the department does not have time or spacing limits for performances. Audience members were required to wear masks, but were not required to be vaccinated.

Other schools, like Syracuse University, require proof of vaccination or a negative COVID-19 test prior to entry for performances in its Department of Drama. Nazareth College, in Pittsford, New York, limits rehearsals to 50 actors and creative team members. The Juilliard School allows performers to remove masks during dress rehearsals, final stage rehearsals and performances.

Cynthia Henderson, professor and associate chair in the Department of Theatre Arts and director of the college production of “RENT,” said via email masks are required for performers through all rehearsals with the exception of when they are performing onstage.

“When a performer is not onstage performing, they have their mask on, even if they are only off stage for a few seconds,” Henderson said.

Henderson said after the positive tests came back, the department worked with IC Health and Safety as well as the Tompkins County Health Department.

“The moment we received the email, we contacted the cast, crew, and creative team to alert them of the exposure,” Henderson said. “We then worked with IC Health and Safety and had everyone connected with Rent tested with both the rapid test and the PCR test. Because of how closely we all work together, covid tests were open to everyone in the Department of Theatre Arts.”

Henderson said the department is waiting for results from the production’s COVID-19 tests and clearance from IC Health and Safety and the Tompkins County Health Department (TCHD) to have the show’s final performance Nov. 18. The Family Educational Rights and Privacy Act (FERPA) does not allow the the college to share information on the health of students. Henderson could not disclose if the members of the production who tested positive performed at the two shows on Saturday Nov. 13.

Daniel Gwirtzman, assistant professor in the Department of Theatre Arts and the choreographer of RENT, said the canceling of the performances was a letdown, but was something the department has had to do before. Pippin, the previous musical that Gwirtzman choreographed, was canceled in mid-March 2020, before the show had its first performance.

“It is always a tremendous disappointment when a show has to be canceled, for all involved, and for all who would have seen it,” Gwirtzman said via email. “In the theater we are in the business of making magic, an inherently optimistic act. I continue to keep the faith … We had four wonderful performances last week of RENT and will hopefully be able to continue. Safety is the most important thing always.”

Gwirtzman said if the Nov. 18 show can go on it will, but the determination will be up to the TCHD.

Sophomore Lily Kimball-Watras said she plans on going to the final Thursday night showing of RENT to support junior Daniel Mejil, a friend of hers from her voice studio.

“I have low hopes for it happening I guess,” Kimball-Watras said. “I would like them to be able to do one more performance but there were multiple cast members that tested positive and they had all been around each other. I don’t think it’s impossible that more of them will test positive.”

Clarification: In a previous version of this story, it may have been unclear that the number of active COVID-19 cases were referring to the entire campus community, not exclusively the Department of Theatre Arts. Additionally, it has been clarified that performers are only permitted to not wear masks while on stage performing. Performers are required to put masks on as soon as they are off stage.