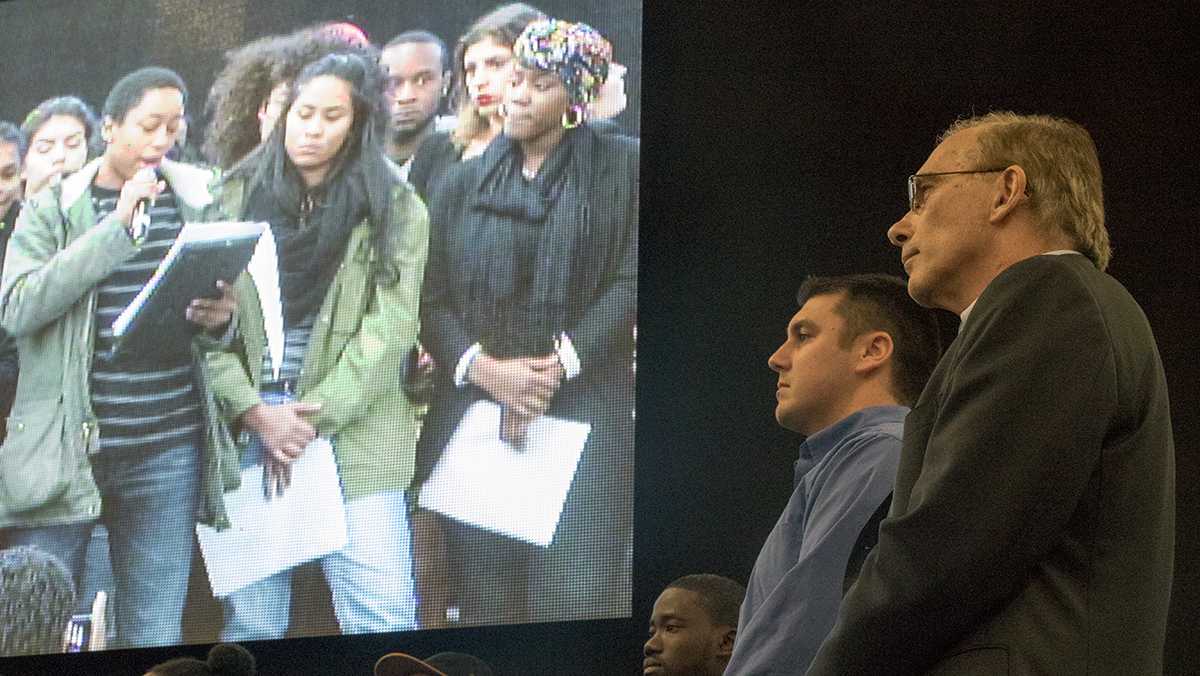 A string of race-related controversies at the University of Missouri mirror incidents that have been occurring at Ithaca College.  At both institutions, student protest groups have spoken out against systemic racism and called for the resignation of their college’s presidents.

POC at IC, which stands for People of Color at Ithaca College, is the group that emerged about three weeks ago surrounding concerns about the college’s responses to race-related incidents. The group stated in a Facebook post on Nov. 9 that it is standing behind the University of Missouri and will host a walkout at 1:30 p.m. Nov. 11 at Free Speech Rock.

The Missouri Students Association is the University of Missouri’s student governing body. In September, Payton Head, the president of the MSA, posted on Facebook that racial slurs had been yelled at him by a group of men driving by in a pickup truck. He said it was not the first time he had suffered from racism on campus.

In early October, the Legion of Black Collegians was preparing for the Homecoming Parade when a white man walked onto their stage and made racist remarks about black students, calling them the N-word. When student protesters tried to confront Wolfe at the parade, he didn’t acknowledge them, leading to accusations that he was dismissive of their concerns.

Later that month, an unknown person drew a swastika using human feces in a university restroom.

“There has just been a string of racist situations that haven’t been addressed by anyone in a leadership position,” University of Missouri freshman Kate Mitchell said. “It’s just gotten to a point to where students have spoken out about the incidents and nothing has been addressed. I’m honestly not sure if Wolfe was the right person to target, but regardless, he was one of the many people who didn’t make a change in our university.”

POC at IC shared a link to a New York Times article covering the University of Missouri event, with the message: “Setting a precedent and we demand Rochon follows suit. Take a look at our event Wednesday.”

POC at IC created the aforementioned Facebook event for the “Solidarity Walk Out” on Nov. 9. The description reads: “At 1:30pm we will be walking out for all the injustices students of color face on this campus and other colleges nationally. With University of Missouri’s president stepping down, we demand Rochon to do the same as it is vital to fight against both covert and overt racism in all places of education and empowerment.”

Before resigning, Loftin announced mandatory online diversity and inclusion training for faculty, staff and students at the University of Missouri to begin in January 2016, according to The Missourian, University of Missouri’s student publication. At the college, Tom Rochon announced a similar initiative at the “Addressing Community Action on Racism and Cultural Bias” forum Oct. 27. Neither POC at IC nor Concerned Student 1950 found this idea effective at their respective schools.

Concerned Student 1950 met with Wolfe on Oct. 27, but no issues were resolved when he did not agree to their demands for a written apology, his removal, increased percentages of black faculty and a strategic plan for retention of “marginalized students,” among other concerns.

At the college, Rochon met with POC at IC on Oct. 23 to lay out his “action oriented goals” for the college’s racial problems. POC at IC walked out of the meeting without responding. In a later statement they said, “We wanted action and not empty dialogue. In accordance to this, we stayed silent as Tom Rochon articulated his ‘action oriented goals.’”

For the past week, Concerned Student 1950 has held a sit-in on a campus plaza and members of the faculty canceled classes for two days, in place of a teach-in focused on race relations.

University of Missouri freshman Emma Matthews said many of her classes have been canceled as faculty promote attendance at campus protests.

Graduate student Jonathan Butler staged a highly publicized, weeklong hunger strike, refusing to eat until Wolfe was gone. In the same week, the university’s Division I football team announced on Nov. 7 that it would refuse to play as long as the president remained in office, with head coach Gary Pinkel saying he supported them. The football strike drew more national attention to the events at Missouri, as officials cited forfeiting the team’s next game would cost the university $1 million.

Sophomore Daniel Konstantinovic, the director of E23, the entertainment news show on Missouri’s student television network MUTV, has been involved in the coverage of the event “in the center of everything” on campus. His reporting of the protests was picked up by ABC World News on Nov. 10.

Konstantinovic said dialogue about the protests was unavoidable on campus Nov. 9.

He said racism has been an issue on Missouri’s campus for years.

“In reality, it is a much, much larger set of issues over a much larger period of time, which culminated into these protests that are happening right now,” he said.

Konstantinovic cited incidents like a 2012 controversy where students put cotton on the fence of the black culture center, as well as threats and derogatory statements made over anonymous apps like Yik Yak.

POC at IC also referenced a history of racist events in the past at the college in the buildup to its actions this year. At its Oct. 21 rally at Free Speech Rock, protesters shared stories to the crowd from their time at the college, citing that these issues are not new, and their confidence in Rochon is diminished as a result.

According to reports by The Missourian, the university’s student government demanded Wolfe’s resignation on Nov. 9.

On the morning of Nov. 9, Wolfe resigned, followed by Loftin, amid the faculty and student protests. Rochon said Oct. 27 he did not know what effect a no confidence vote would have on him.
“At this point, I’m just focused on my leadership responsibility for Ithaca College,” he said.