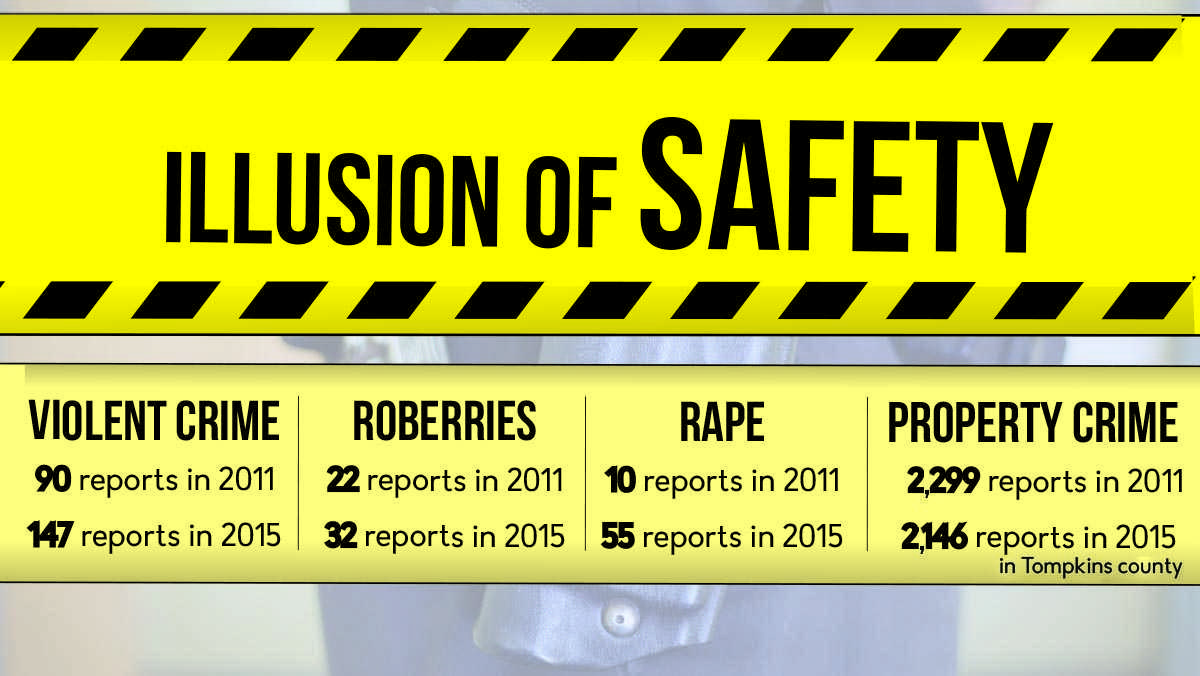 Early in the morning on April 9, two men got into an altercation, the likes of which sometimes occur on The Commons after a night of partying. But the fight escalated, and one of the men pulled out a gun and shot the other.

Just after noon on Easter, an elderly woman was robbed on South Geneva Street while walking home from church — the second personal robbery that week.

Though the events are random and apparently disconnected, they are just a few examples contributing to an overall increase in violent crime in Tompkins County over the past five years.

Jamie Williamson, public information officer at the Ithaca Police Department, said there have been two homicides in the Town of Ithaca over the past eight months, marking the first time in nearly five years that the City of Ithaca has experienced a homicide. He said it is difficult to determine the reason for that.

“If we had the answer to the question, we would be able to prevent these senseless acts of violence,” he said.

“We have seen a marked increase in both the quantity of drugs and the severity of drugs here in Ithaca,” he said. “We have done virtually everything within our power to combat problems that drugs, in particular heroin, have done to our community.”

In 2012, Ithaca was named the most secure place to live among municipalities with populations under 150,000 in the United States by Farmers Insurance. This took into account a slew of statistics such as crime rates, cancer mortality rates, life expectancy, job-loss numbers and more.

John Graves, president of the South Hill Civic Association, said he has been a resident of Ithaca his entire life and that while he still feels safe in Ithaca, he thinks violent and drug crimes have gotten worse.

“You have to be very careful when you go out at like 10 o’clock,” he said. “Over the years, there’s just random violence.”

While he said he feels the types of crimes committed have gotten worse in Ithaca, he said he can still envision Ithaca as a relatively safe place.

“I know the police department says this is still a very safe city to live in,” he said. “I can believe that, but [as] somebody that’s lived here my whole life, crime seems to be a much bigger factor now than it was in previous decades.”

Emrys Taylor-Milner has lived in Ithaca for the past eight years, having moved here from Athens, Ohio. He said he considers the bigger picture rather than letting a few crimes define the town.

“I feel very safe,” he said. “There are crimes here as there will be anywhere with a big population. But you have to remember that they’re relative. It’s not a town with a lot of crime, per se.”

“In response to these crimes, I have reorganized my personnel to increase police presence in the downtown area and will have further discussion with my staff on creative ways to be proactive in our responses to these types of incidents.”

Despite his car’s having been stolen two weeks ago, Kenny Broadwell, a resident of Ithaca for the past 25 years, said he still feels relatively safe because most of the crimes that take place are petty.

“I feel very safe here,” he said. “I don’t live in fear. I’m really privileged. Everyone in Ithaca is. It’s a really great place.”

Many students at the college said that although they were startled by the recent shooting and the apparent uptick in shootings over the past year, they still feel safe in Ithaca. In many cases, students said they felt Ithaca was safer than their own hometowns.

For example, junior Denny Peña said he feels safer in Ithaca than he does back home in the Bronx, a borough of New York City.

“No matter where you go, you are always going to encounter violence in some way, shape or form, no matter what college you go to,” he said.

Senior Sarah Stuart-Sikowitz wrote about her concerns on violence in Ithaca in The Ithaca College Chronicle back in January. She said that she was not surprised by the recent shooting because she thinks Ithaca has a “party culture” that can erupt into violence at unpredictable times.

“It does lead to violent confrontations,” she said. “I think a lot of people know about this, but no one is really doing anything about this because that’s just what makes Ithaca, Ithaca.”

On April 9, when the most recent shooting in the city took place, freshman Gabrielle Picca was walking out of Due Amici with her friends when she heard the shots fired. She then saw a man on the ground.

“I wanted to go help,” she said. “It was scary because I had never heard gun shots in such a close setting and having it be a real thing where someone was actually injured.”

Despite witnessing the shooting, she said she feels safe in Ithaca and was reassured by the speed with which the police responded to the incident.

The April 9 shooting incident occurred the same day prospective students came to the college with their parents for Ithaca Today, one of the largest admissions events for the college.

Despite this, Bonnie Falk said her son is planning on coming to study sport management at the college and that she still feels comfortable about his attending.

Her daughter, who she said attends Syracuse University, has experienced a lockdown on campus before and was on campus while similar shooting incidents occurred in the City of Syracuse. Her son, Paul, said the shooting incident in Ithaca would not impact his decision of whether or not to attend the college.

Marilyn Littelo, whose daughter, Grace, is considering attending the college, said she felt concerned about the shooting, but her daughter said she will still likely attend the college.

“It makes a little bit of a difference, but if it doesn’t happen that much and odds are that I’m not going to be out at 1 a.m. in the morning, then I’m still going to go here,” Grace said.