Freshman Joshua Couce has violated the speed limit on
occasion. Couce might exceed 100 mph, but he is not behind the wheel of a sports car. He is driving an ambulance with an injured patient in the back. 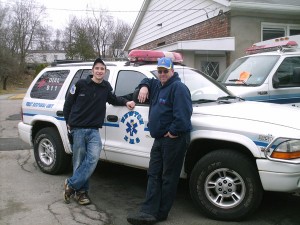 From left, freshman Joshua Couce and 2nd Lieutenant Rick Wahlers stand in front of one of Newton Volunteer First Aid and Rescue Squad’s emergency response vehicles. Couce was certified as an EMT at 16 and has been on the squad since.

As a Senior Emergency Technician, Couce’s rush is driven by the “golden hour,” or the first 60 minutes following a traumatic injury in which immediate medical attention can improve a person’s chances of survival.

When Couce is not concentrating on his politics major at Ithaca College, he works for the Newton Volunteer First Aid Squad in Newton, N.J., which is 3 1/2 hours away from the college. From 6 a.m. to 6 p.m. on Sundays when he’s home, Couce responds to emergency calls and attends to injured patients.

He’s no stranger to the blood and guts that come with being on a team designed to help people in an emergency. And he knows he is always at risk of contracting a disease when answering emergency calls.

Couce said he has had plenty of time to adjust to the job. At 16 years old, he was certified in cardiopulmonary resuscitation and automated external defibrillation. He began working as a first responder within three months of being certified.

After completing the 40 hours of training required to be a First Responder, Couce began taking emergency calls. He said the education was good preparation, but his experiences out in the field are where he has learned the most.

Rick Wahlers, 2nd Lieutenant of the Newton Volunteer First Aid and Rescue Squad, has worked with Couce since he first joined and has watched him progress.

“He has gone from a somewhat hyper teenager to a very calm, very resourceful adult,” he said. “He is one of the few people who I can honestly say that if I was ever in trouble, I would feel much better seeing him show up.”

Freshman Leonard Slutsky, a friend of Couce, said Couce’s calm demeanor and knowledge of the field makes him a trustworthy EMT.

“After I got to know him a bit better, it made me feel good that he is an EMT or someone who does that kind of work because when he does something, he does it right,” he said. “I really trust him with that sort of thing.”

On his first case, Couce was called to his high school football field where one of his friends dislocated his shoulder.

“After that call, I knew I loved this stuff,” he said. “Going to the scene, lights and sirens, adrenaline’s pumping and you’re going there to help that person — even if it’s just a broken bone, you’re still making a difference.”

However, some calls have been more traumatic. Couce said he once responded to a man who sustained fatal injuries to the neck and head after falling 10 feet and bashing his head against the side of a staircase.

“He had brains coming out of his head, and there was blood all over the floor,” he said. “That was the worst trauma I have ever seen.”

Couce said he understands encounters with death are inevitable when working in the medical field.

“You’re putting in so much effort, and you’re doing so much that it’s so hard to accept the fact that you feel that you could not do enough to save that person’s life, and they die because of you,” he said. “But in reality, you have to think that it’s not true and that you didn’t even cause that person to be that way.”

In his time working with the squad, Couce said he has seen the impact it has on saving lives. For this reason, he said, he wants to establish a First Aid Squad at the college.

The initiative is still in the works, but he said he has spoken with staff members in the Health Center and Residential Life.

Slutsky said he supports Couce’s initiative, and he believes there are added benefits to having an EMT squad on campus.

“There are a lot of emergency calls every year, and they can be handled by something that’s not as expensive as an ambulance call,” he said.

When Couce is not at home serving on the squad, he can be found in the Taughannock Falls room every Wednesday voicing his concerns as a senator for the
Student Government Association. He is also a member of the Model United Nations team at the college, which he calls his “second family.”

Though he said his dream is to become a U.S. Senator, Couce said he plans to continue serving as an EMT.