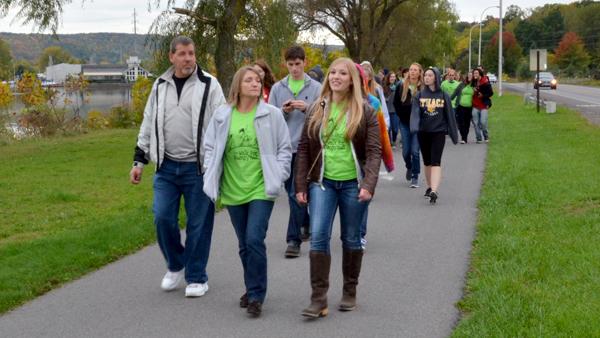 Kourtney Selak/The Ithacan
A crowd of people walk in Cass Park Saturday for Plumpy'nut. The walk for Plumpy'nut is an event organized by Food for Thought aiming to raise money for Concern Worldwide's therapeutic feeding stations in Ethiopia.
By Kelly Cucolo — Contributing Writer
Published: October 9, 2012

The Ithaca community joined student organization IC Food for Thought to take strides against child malnutrition at the third annual Walk for Plumpy’nut on Sunday, raising a total of $4,100.

Funds raised through the event are used to purchase Plumpy’nut, a meal supplement for malnourished children. Senior Lethia McFarland said Food for Thought is partnered with Concern Worldwide, an international charity that fights world poverty, which has feeding centers that distribute Plumpy’nut.

“Plumpy’nut is really revolutionary in the fight against malnutrition, because two packets a day can get a child up to a proper level of nutrition in one month,” McFarland said.

The event brought 102 participants to Cass Park on Sunday morning for the 5K walk through the park’s surrounding trails. Food for Thought set up informational pamphlets and posters on picnic tables at the park to provide background information on the walk’s cause. There were also tables with raffle prizes to increase profits for the event. The college radio station, WICB, had representatives at the event to disc jockey and help cheer along the walkers.

McFarland, president of IC Food for Thought, said there were fewer participants compared to last year. McFarland said the cold weather may have impacted the number, because last year the weather was warm, and more people showed up to register the day of the walk.

“Normally more people come and register the day of the walk versus pre-registration, so I think the weather has a huge impact,” McFarland said.

Over the past five years, IC Food for Thought has raised $20,000. Junior Lindsey Smith, Food for Thought’s vice president of events, said the goal for the walk this year was to raise $5,000. Last year they raised $4,300.

Zach Briggs, communications director of Food for Thought, said the club gathered more raffle items from local organizations and businesses, which has been a great way to raise money for the cause. He said there was more than $1,500 in raffle items.

Briggs also said the club asks many local businesses and organizations in Ithaca if they want to donate and as a result received 40 sponsors.

McFarland said the first Walk for Plumpy’nut held in Ithaca was in Fall 2010 after Food for Thought became a club that spring. Senior Elizabeth Stoltz founded the club.

She said the support from the college and local communities has been really helpful in raising funds and awareness.

“The Ithaca community has been incredibly generous,” McFarland said. “It was really inspiring to get support from the student community.”