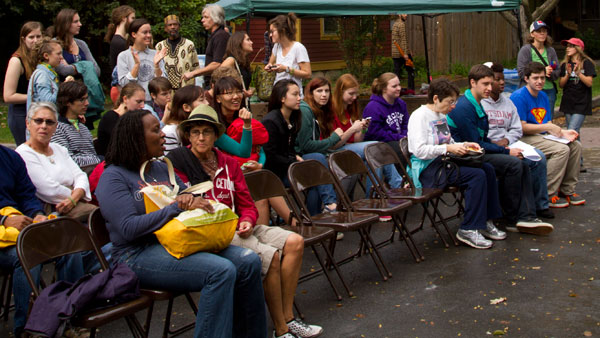 Ithaca students and community members gathered on the starting line, waiting in anticipation for the count down to the 7th annual Walk for Plumpy’nut.

The Walk for Plumpy’nut, which was held on Sept. 21 in Cass Park, is an annual 5K walk organized by Food for Thought to raise money to purchase Plumpy’nut, a nutritional supplement given to malnourished children in Ethiopia. This year, the walk raised just under $2,000, according to Zachary Briggs, Food for Thought communications director.

Lindsey Smith, senior and Food for Thought president, said 106 people pre-registered for this year’s walk — the highest turnout the organization had ever seen.

According to the Food for Thought website, Plumpy’nut is made of peanut paste, powdered milk, vegetable oil and several vitamins and minerals. Smith said the group favors Plumpy’nut over other nutritional supplements because it is efficient and easily stored.

“Concern Worldwide is the larger NGO that actually has the feeding centers in Ethiopia,” Smith said. “All of our money is sent to Concern Worldwide, who purchases the Plumpy’nut and then distributes it.”

In addition to the funds raised by registration, Food for Thought also raffled off prize packages donated by local sponsors including Collegetown Bagels, the Hilton Garden Inn and La Tourelle Resort and Spa.

The Walk for Plumpy’nut received a large turnout of students from the college. Freshmen Maddie Haftel, Lexie Kennedy and Sabrina Rabinowitz said they supported the cause because it coincides with their majors.

“This all interests us, because we’re all in the health and nutrition field,” Haftel said. “We just wanted to get involved with that.”

Food for Thought gave participants a chance to taste the product for which their donations were paying. Volunteers gave out bite-sized samples of Plumpy’nut for them to try.

After tasting Plumpy’nut, junior Christina Chironna said it had a strong peanut butter taste, but it wasn’t what she was expecting.

“It’s peanut buttery, but it’s like a very strong protein bar,” Chironna said. “It’s different, but I guess if I were malnourished it would be really good.”