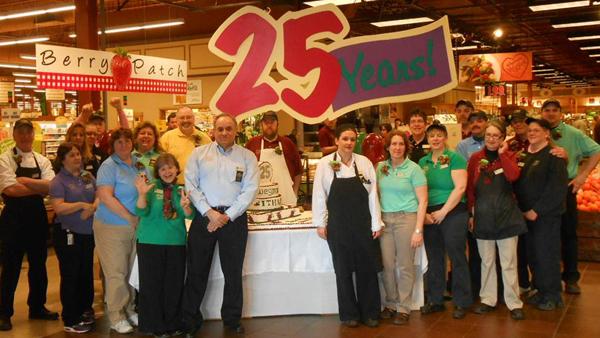 Courtesy of Wegmans
Employees from the Wegmans grocery store in Ithaca stand by a cake they served to customers at the store March 16. The Ithaca location is celebrating its 25th anniversary this year.
By Sabrina Knight — Assistant News Editor
Published: March 27, 2013

The Wegmans grocery store in Ithaca, which is home to about 600 workers, is celebrating its 25th anniversary this year.

Wegmans, which has 79 stores nationally, was voted the fourth best company to work for in 2012 by Fortune Magazine. According to an article from the Atlantic, executives from the supermarket chain attribute their success to not being a company that is publicly traded. Owners refuse to open more than three stores a year so they can remain the best without growing too fast.

Fran Secondo, Service Area Manager, said Wegmans in Ithaca celebrated its anniversary on March 16 by serving cake to customers who came to shop.

Employees like Executive Chef Mike Washburn, who has worked at Wegmans for 10 years, said his job is rewarding, and he is always searching for ways of improving what he does.

“I’ve learned to be open to a lot of different ideas,” Washburn said. “This is a very compelling community in the sense that we have some very knowledgeable, passionate people about food and everything that relates to that in terms of sustainability and all the factors that support those types of initiatives.”

Junior Alex Cartini, who is currently studying for the semester in Los Angeles, has been a Wegmans employee for five years. When he lives on campus, he says he shops at Wegmans at least once a week. Cartini said he likes to take friends who don’t have a Wegmans in their hometowns for grocery shopping in the Ithaca Wegmans.

“It helped me appreciate it, because it really is an awesome grocery store, because everything is all in one store, and everything is high quality, and it’s a great place to shop,” Cartini said.

Store Manager Gary Woloszyn, who has worked for Wegmans for 20 years, said the store first opened in February 1988. Woloszyn said it was different because it was opened as a prototype store and had all the new “bells and whistles” that the company was talking about implementing in its other stores.

Woloszyn said Wegmans is a generational store because the company consistently reassesses its goals, department layout, business trends and what is important to the community. He said there is now a stronger focus on perishable food over grocery food because of this reassessment.

In 1997, the store was rebuilt in its current location as a result of a redesign, Woloszyn said. He said Wegmans also hired executive chefs from major hotel chains to staff the prepared foods area.

“We were looking at what was happening in the country, time constraints on families, and we really worked hard to give people choices on how to do a dinner or their lunch by having meals prepared in different stages, having raw ingredients, having ready to cook items and having ready to prepare items,” Woloszyn said.

Secondo said Ithaca has provided Wegmans with a platform for interaction with its customers.

“It’s a great partnership we have in Ithaca,” Secondo said. “We like to make a difference in the community, and we love that we partner with everyone in the community. It’s great that the customers are so loyal and that we can help out throughout the community.”

In addition to connecting with the community, Woloszyn said, Wegmans is able to adapt to changing national interests.

“They are very flexible in being able to adjust to trends in the country,” he said. “In fact, they lead with the trends.”

“They worked really hard from grassroot efforts to really identify growers and farmers that would move toward organics. It really expanded the vegetarian program,” Woloszyn said.

Wegmans has also worked to find additional suppliers for produce that can only be harvested at specific times of the year, Woloszyn said. Having producers from California, Florida and South Africa ensures that customers can buy produce outside the harvest seasons.

Washburn said Wegmans is a valuable place to work and shop. He said it has helped him grow as a professional.

“It goes beyond making food or providing groceries for folks but to meet the need of our customers,” Washburn said. “I think that is how we will continue to move into the future.”