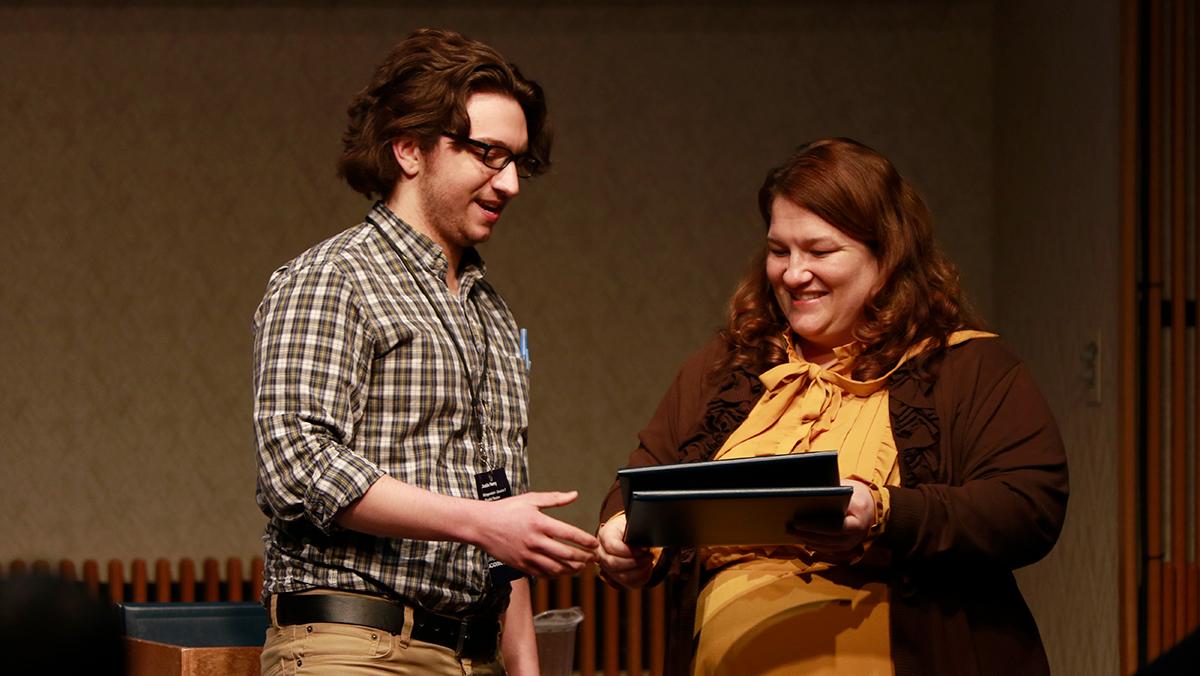 Connor Lange/The Ithacan
Junior Justin Henry receiving an award from Kimberly Wilkinson, assistant professor in the Department of Occupational Therapy, for his presentation on the corporatization of higher education with a focus on Ithaca College, entitled “‘Corporatizing’ College: The story of Ideological Divide at Ithaca College.”
By Meaghan McElroy — Staff Writer
Published: April 18, 2017

After a long day of students from every department presenting research on anything from Edgar Allan Poe’s attention to mathematics in his written work to toe walking in patients with cerebral palsy, the 20th annual James J. Whalen Academic Symposium came to a close April 13 with a reception to honor original student research.

This year’s symposium was led by the co-chairs of the Whalen Symposium Steering Committee: Rumit Kakar Singh, assistant professor in the Department of Physical Therapy, and Kimberly Wilkinson, assistant professor in the Department of Occupational Therapy. Wilkinson said the symposium had over 430 students present on a variety of topics from all departments within the college. The symposium serves as an opportunity for students to present to the campus community on the research and projects they have been working on during the academic year. The symposium began in 1997 to honor former Ithaca College President James J. Whalen and his “dedication to student learning and undergraduate research,” according to the symposium’s website.

“It’s been an absolutely incredible and exhilarating day of posters and presentations,” Wilkinson said at the beginning of the closing reception. “It was inspirational for me to see the outcomes of the individual studies, the artistic contributions, the group projects, and the student and faculty collaborations.”

There is no one winner for the symposium. Rather, each department chooses one or multiple students to give awards to. More than 15 students received awards, the full list of whom can be found here.

“I really loved Janet Mock’s memoir ‘Redefining Realness,’ so when I saw the documentary about Miss Major, I realized their lives would be really informative if they were put in conversation with each other,” Jacobson said.

Junior Justin Henry won an award for his presentation on the corporatization of higher education with a focus on Ithaca College, entitled “‘Corporatizing’ College: The story of Ideological Divide at Ithaca College.” Henry presented on a national trend that colleges are diverting their attention from the needs of students to monetary concerns to sustain an institution. Henry said he had been doing research on the trend on his own but that his professor encouraged him to put the information together in a presentation.

“I was researching what’s referred to as the corporatization of higher education and trying to buzzword that and try to figure out what people are talking about, and confront the culture of that at Ithaca College from a budgeting and finance point,” Henry said.

Henry said his research was inspired by the issues that the contingent faculty unions were facing earlier this academic year.

Another winner, senior Kaleb Cabisca, discussed the relationship between the foreign office of Bosnia and The Times of London in 1908 during his presentation, titled “The Press, Public Opinion and Foreign Office: Developing the Bosnian Crisis of 1908.”

“It sort of developed into how government uses media to get what it wants, et cetera,” Cabisca said.

Wilkinson said the symposium allows students, winners and participants alike to not only present on their original research, but also to inspire change in the communities around them.

“This day, the 20th annual James J. Whalen Academic Symposium, is a testament to the tremendous work of our students, our faculty, our staff and our administration here at Ithaca College,” Wilkinson said. “We are so glad that we are able to listen to what the world needs, to be in this world and to make change, be those producers of information.”

Students from each of Ithaca College’s five schools came together today to speak at the James J. Whalen Academic Symposium throughout the day in Campus Center. The symposium was organized to present and celebrate student work and serves as the first event in the weekend’s inauguration of President Tom Rochon. More than 170 students displayed…

Ithaca College will present the 10th annual James J. Whalen Academic Symposium on Tuesday, an event that showcases the research of 200 students from the college’s six schools. David Garcia, associate provost, said the symposium, which takes place throughout the day in the Campus Center and Emerson Suites, is an opportunity for students to share…