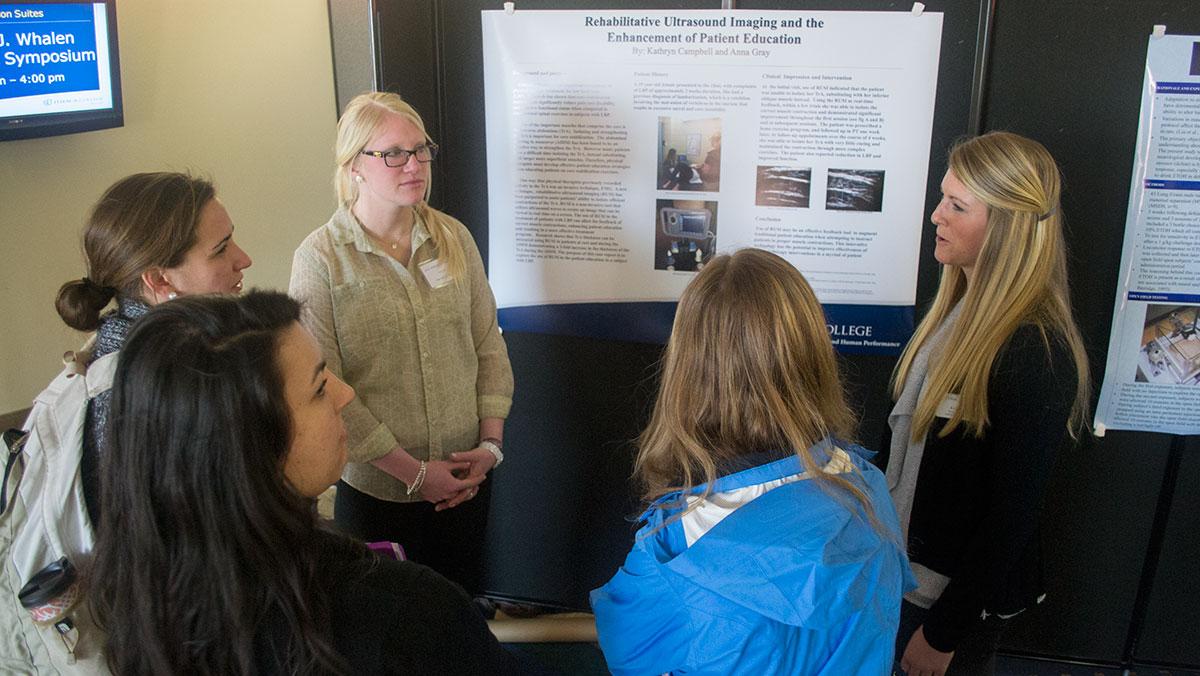 Jennifer Williams/ The Ithacan
From left, junior Anna Gray and senior Kathryn Campbell, both majoring in physical therapy, present their research on ultrasound imaging and patient education at the Whalen Symposium April 14, 2014, in the North Foyer.
By Maura Aleardi — Staff Writer
Published: April 1, 2015

The Ithaca College community will gather April 9 for the largest annual Whalen Symposium to date, during which students will present and receive awards for research projects completed over the past six to 12 months.

Yvonne Rogalski, faculty chair of the Whalen Symposium steering committee, said this year’s event will feature 425 student presenters, which is 57 more than last year. In addition, seven of the presentations will debut new presentation styles, such as visual and creative arts pieces. She said some of the subjects showcased in the symposium include psychology, accounting and writing.

At the event, students will give eight- to 10-minute presentations that showcase their research projects, junior Andrew Olkowski said. He described the event as the college’s own TEDx event, which is a localized, independent TED conference that spreads innovative ideas through brief talks. In addition to being a member of the symposium’s steering committee, Olkowski will also present his research project on being a resident assistant.

Rogalski said students may receive gift cards to the Bookstore as an award at the symposium. She said there are 10 awards available this year for presentations, in addition to two awards for creativity and two for posters.

Another participant, senior Jared Wolf, will be presenting two separate projects. He said the event gives students a chance to be recognized for work that, otherwise, may not be.

“There’s so much great and varied work being done by students in all fields all across campus, and I think that so often it goes unrecognized by anything more than a grade, and I think that this is a chance for the campus community to see that work,” Wolf said. “I think it really creates more of a community around academic and creative work.”

Not only are students able to see what their peers are doing on campus, but professors also get a chance to appreciate their students’ works, senior presenter Lisa Hillman said.

“I think professors get the opportunity to see what their students truly learn from being in their classes and what kind of ideas students can bring to the table,” Hillman said.

Wolf said his first project focuses on ending microaggressions in the workplace. He worked with four other students to come up with an alternative human resources department structure and an app that he said will lessen the frequency of microaggressions in the workplace. The app would allow users to report microaggressions, schedule appointments with the human resources department and gather information on diversity education, he said. Wolf said his other project looked at Invisible Children, whose cause is to advocate for protecting African children from the actions of Joseph Kony’s Lord’s Resistance Army, as a case study for a nonprofit in crisis. Wolf and his three partners came up with solutions for changing Invisible Children’s image following the KONY 2012 video, he said.

Hillman, who will also be presenting two projects, said her first project is an individual work that analyzes health policy in order to find a new way for Medicaid enrollees in New York state to receive better dental access. The second is a collaborative work that will showcase a new and improved design for dialysis, making the process more comfortable and convenient, Hillman said.

The tradition began in 1997 in honor of James J. Whalen’s passion for student-faculty collaboration, Rogalski said. Olkowski said the future goal for the Whalen Symposium is to make it a campus-wide event, involving the majority of the community members and creating a long-lasting tradition that includes the entire college. He said he sees the types of presentations and topics expanding further than they already have.

Olkowski said the Whalen Symposium is giving students the ability to see how potentially effective their work is, no matter what type of work it is.

“Research is everywhere,” Olkowski said. “Whether you’re an RA and trying to find a floor program or you’re a biologist in a lab, research is literally everywhere. So, I think it’s expanding to the fact where students are realizing that they can submit for whatever they do because they put so much hard work and thought into what they’re doing.”