Ithaca College grounds crew member Andy Ahart’s work schedule is a little unusual. He said the time he wakes up is inconsistent and he sometimes does not end his day until late in the evening. His alarm will go off in the early hours of the morning — it could be midnight or 3 a.m. — and then he drives up to the college. Once there, he gets into one of the plows, clears the campus, and goes home, only to “get back up and do it all over again.”

Ahart has been working for the college for 11 years and plowing the snow on campus for five years. For a decade, he has tackled winter on the campus in the harshest conditions, including a Valentine’s Day storm that happened in 2007. Ahart was new to campus and still getting used to the routine of working for the grounds department of the Office of Facilities. He said that during the storm, the crew members put in approximately 30 hours straight.

“You had to take a break, and a lot of us sleep in an office or slept in a pickup truck in order to stay with your overtime,” Ahart said. “We took quick naps and got right back at it.”

On March 2, the college closed after news of a winter storm warning. Cornell University, SUNY Cortland and Binghamton University also closed because of anticipated harsh nor’easter conditions. During the storm, the Ithaca region got 3.5 inches of snow. In March there has been a total of 5.1 inches of snowfall, according to the Northeast Regional Climate Center.

David Maley, senior public information officer, said the Ithaca College Core Emergency Response Team met March 1 at 4:30 p.m. to discuss the impending storm and how it might affect the college. He said with the uncertainty surrounding the weather, the team decided it was too early to make a call. It reconvened by phone call at 5 a.m. on Friday to make the decision to close the school.

“These [decisions] are never easy decisions to make”, Maley said. “Especially when classes are in session and the campus is occupied by students, because we still have to meet their needs and of course there are many employees who still need to come to work for that.”

It is rare the college closes the campus in response to snow, and when school has not been canceled, the winter weather forces faculty and students to consider whether they can make it to class.

Ernie McClatchie, director of the Department of Facilities, Grounds and Maintenance, said that the snow plows have to cover 36 acres of parking lots and 7 miles of roadway and that over 1,200 exterior stairs need to be shoveled.

Tim Carey, associate vice president of the Office of Facilities, said the grounds crew tries to finish plowing before faculty, staff and students arrive on campus for morning classes. Carey said the dining halls and residential buildings are often addressed first after a snowfall. Ahart said stairways leading to the dining halls and academic buildings are top priorities for clearing. S-Lot near the Roy H. Park School of Communications, L-Lot next to the Terraces Residence Halls, F-Lot near the Dillingham Center and Harold F. and Lois M. Smiddy Hall, the main entrance into campus, the Peggy Ryan Williams Center area and the visitor’s lot are also priorities.

McClatchie said the roadways and fire lanes are addressed by the overnight crew and cleared before classes start.

Carey said he thinks this year has been a typical winter this season. In January, the sum of the snowfall in Ithaca was 13.8 inches, according to the Northeast Regional Climate Center. In February, the sum of the snowfall was 12.8 inches. Carey said the preparation for winter storms happens before the season begins. But when there is predicted snowfall in the forecast, he said, the grounds department will receive a three– to four–day weather report and plans are modified as the storm approaches.

McClatchie said that this year, there has been more snowfall during the school day, which can be difficult. He said there have been small accumulations of snow from time to time, but that particular circumstance still requires the entire grounds crew to address it. 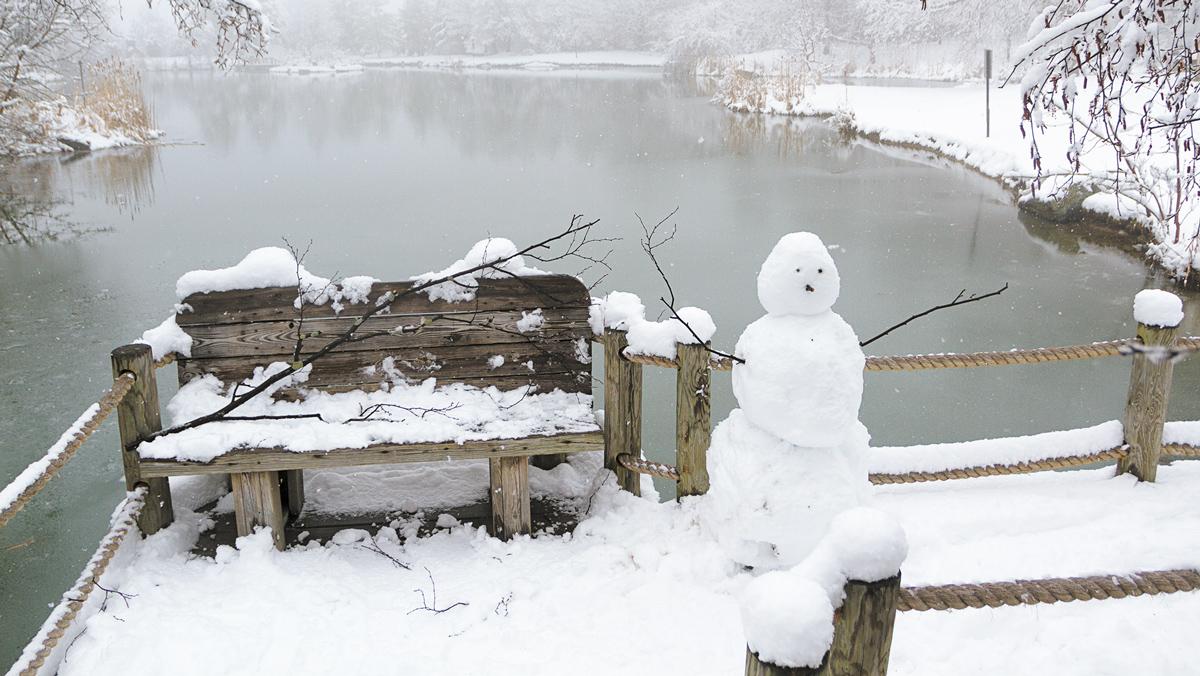 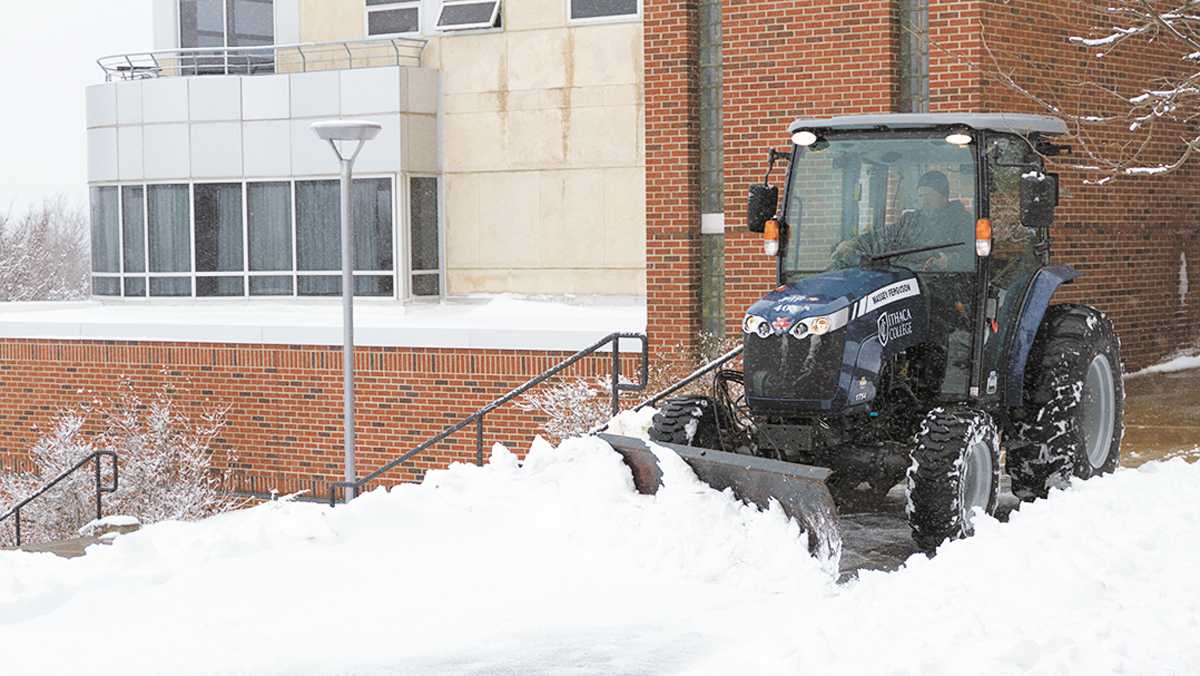 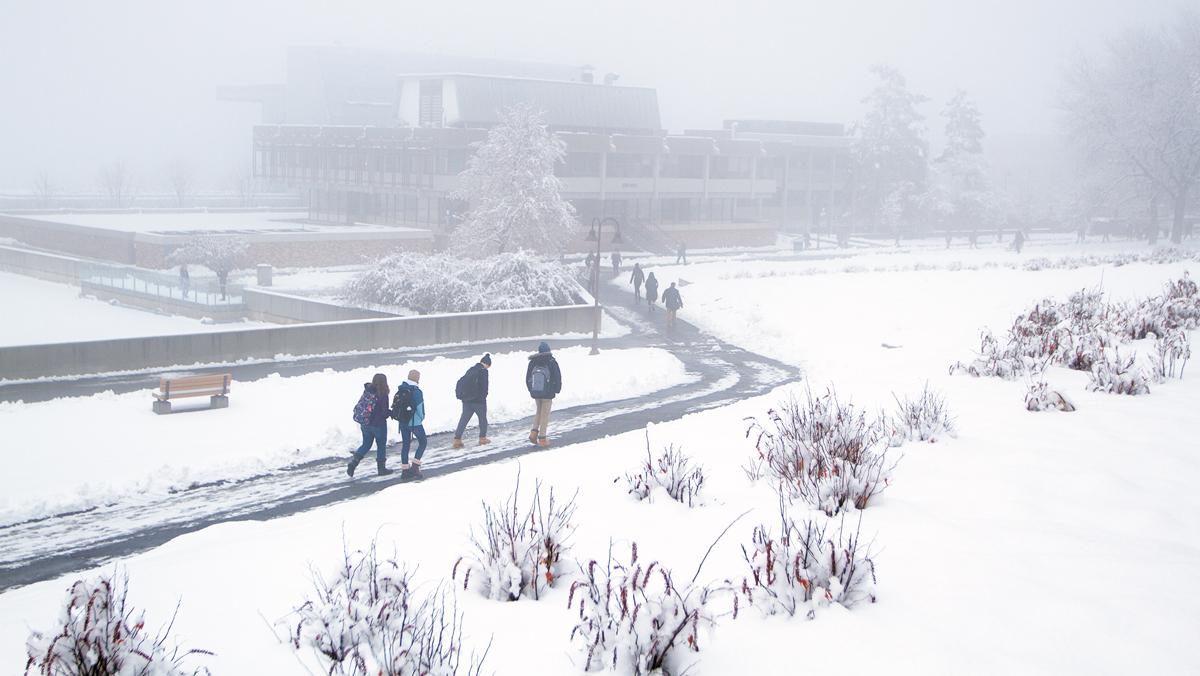 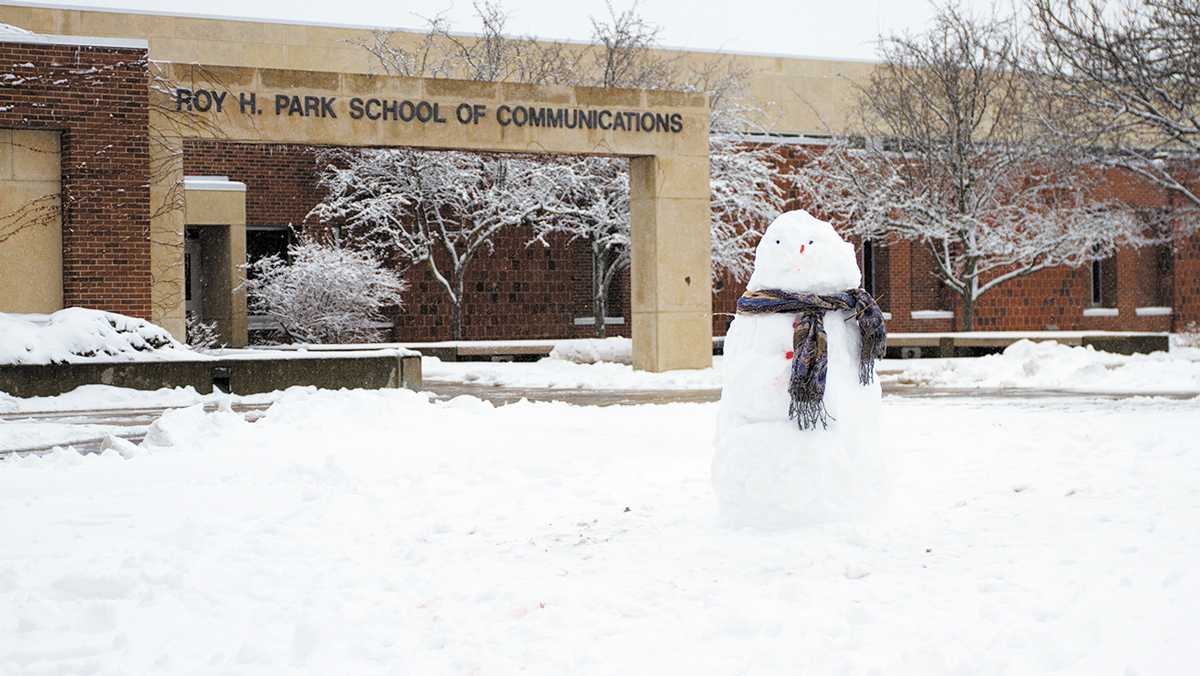 <
►
>
A snowman stands on the bridge near Muller Chapel on Feb. 22. It snowed 12.8 inches in the Ithaca region during the month of February. The college has had one snow day in Spring 2018. ELIAS OLSEN/THE ITHACAN

“We’ve had everything cleaned up by 7 o’clock in the morning and all of a sudden two inches of snow will come, McClatchie said. “And everybody was here for the past six hours, but it doesn’t look like anybody accomplished anything. I think we’ve seen a lot of those smaller accumulations that still result in a lot of additional time being put in.”

Carey said that facilities tries to limit the amount of salt they use on campus. He said salt is normally not scattered around campus until the grounds crew has finished plowing.

Although the grounds crew works day and night to get the campus cleared, there are times when it is still difficult to navigate around the college safely. Freshman Julia Klipp said she works at the Campus Center Dining Hall, which requires her to leave her residence hall, East Tower, around 5:50 a.m. each morning. She said in the early hours of the morning, most of the areas she walks through have not been salted or shoveled, making her commute to work dangerous.

“I’ve been late to work a few times as a result of the weather because I’m concerned for my safety,” Klipp said. “I sprained my ankle last year, and as a result from slipping and falling, my ankle has become fragile and makes it difficult to work out and climb up to the Towers.”

Junior Melanie Malcomson has a car on campus, and she said last semester she was leaving a rehearsal at the Whalen School of Music and her roommate was driving her from the Towers parking lot to Smiddy to retrieve her car. She said as they were going toward Smiddy, the road was closed. She said Public Safety was rerouting vehicles because there was no salt on the roads.

“Getting back on campus, it took us from the loop from Towers, through Circles, to Garden Apartments — a total of 45 minutes,” Malcomson said.

She said even with her own vehicle, the breaks can only do so much when driving in these conditions. She also said the parking lots are rarely plowed in a timely manner.

Daniel Briotta, associate professor in the Department of Physics and Astronomy, said he canceled class this semester in early February due to snow conditions. He said he had trouble leaving his driveway because of the snow and could not get to campus. He said canceling the class did not negatively impact course schedules.

“Things got a little compressed, but we were able to get on schedule fairly quickly,” Briotta said. “It wasn’t really a problem.”

Briotta said because the college is a residential campus, students can still go to class in winter conditions, but he understands why the college decided to close before the storm March 2. He said even if the college stayed open, classes would still be missed or canceled.

“It was nice to me because I didn’t have to worry about feeling guilty about not being there for my students,” Briotta said. “We probably could have [stayed open], but what would have happened would have been a number of faculty, like me, would have been stuck and not able to make class.”

Senior Shannon Davis said he lives off campus on South Hill and has had difficulty getting to classes. He said sometimes the snow adds to the already difficult task of finding a parking spot on campus. He said he thinks the grounds crew does a satisfactory job of managing the snow, but parking can sometimes be frustrating.

“Sometimes, the one space that is left is only left because it has been covered with snow,” he said.

Davis said, based on his previous experiences working for a plowing company, he understands what the workers have to go through in order to clear the snow and ensure civilian safety. Although he has not driven a plow himself, he said he is familiar with the early schedule of those who plow.

“There’s something to be said for the kind of mental willpower to get up on a cold morning when the sun is not even up,” he said. “I always hated it, so I respect people who are able to do that.”

Ahart said although the job is tough at times, he usually does not mind it. The 3 a.m. wake–up call does not bother him, but he said he knows the midnight shift can be hard for some of his fellow crew members. He said it is common that the grounds crew sees the campus and each other more than they see their families.

“The family is around; you get a few hours of sleep and get right back to work,” Ahart said. “But it’s part of the job. It comes with the territory, and we gotta get up in the middle of the night to get things done. We gotta do what we gotta do.”

The season of unpredictable weather has continued with heavy snowfall finally arriving on South Hill — in the end of April.

Ithaca College students learned how to survive outside during a New York winter in a talk by the founder of Primitive Pursuits, a local nature education program.