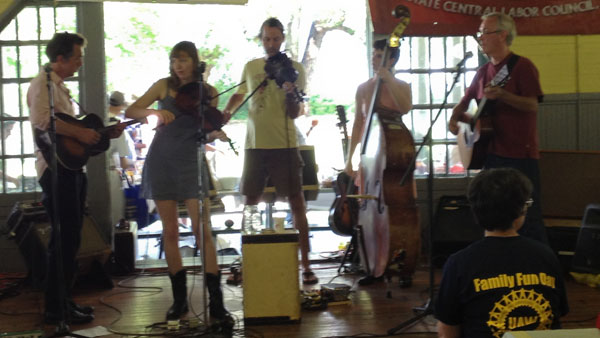 Discussions of the ‘‘living wage’’ and the 99 percent were part of the dialogue Monday as almost 400 community members gathered together at the free picnic to support and celebrate the Tompkins County Workers’ Center and Labor Day.

Bad weather couldn’t stop the TCWC from hosting its 30th annual Labor Day picnic, which was held from 11 a.m. to 3 p.m. Monday in Stewart Park.

The event was sponsored by the TCWC and the Midstate Central Labor Council. Richie Stearns and the Evil City String Band performed at the picnic between speeches and presentations of awards.

A common message throughout the event involved the “living wage” which is the minimum income necessary for a worker to have access to basic needs like food and housing. According to Pete Meyers, one of the founders of the TCWC, the living wage in Ithaca is now $12.62, which is higher than the federal living wage and the state minimum wage.

In 2005 the TCWC began a program called the Living Wage Employers Certification program, and Meyers said Tompkins County was one of the first living wage employers certified, as well as the largest employer in the program with about 750 employees.

Meyers said the City of Ithaca is slated to become a living wage employer on Oct. 1. He said the city’s living wage certification sends a message to other businesses in the community and around the region.

“Having an official governmental institution agree to this basically signifies to other businesses that the seats of power locally agree with this,” Meyers said.

Meyers said an important victory for the TCWC was their living wage campaign for all Sodexo employees, which began in fall 2010. He said at the time, Sodexo employees were being paid $8 an hour. After seven months of the campaign, Sodexo agreed to begin paying employees a living wage.

The Joe Hill award was given to Stanley McPherson and Milton Webb, and the Friend of Labor award was given to Leni Hochman for her efforts on behalf of the living wage study. Meyers said the Goat of Labor award is a mock award given to a labor-unfriendly company. This year’s recipients were Wal-Mart and the Gap, because of the fires that killed 1,100 Bangladeshi people in May.

“Basically we’re saying that Wal-Mart and the Gap and some other corporations need to have stronger standards by which they have subcontractors in developing countries working in sweatshops that are unsafe,” Meyers said. “We’re saying that they have more control over that than they’re saying they have.”

Other organizations that were at the event included Sustainable Tompkins, the Labor-Religion Coalition, the Democratic Socialists of America, Move to Amend, the Ithaca Free Clinic and the Occupational Health Clinical Center.

This is the second year that Rick Sprout, an outreach volunteer for the OHCC, an organization that helps workers deal with work related injuries and diseases, has attended and tabled at the picnic. Sprout said the OHCC is a source of support for workers who have been injured on the job who might not have access to the health care they need for work-related symptoms.

Victor Tiffany, the New York State acting coordinator for Move to Amend, said his organization is focused on reaching out to people across partisan and ideological lines to overturn the 2010 Citizens United Supreme Court decision.

“Move to Amend is trying to pass an amendment to the constitution that would say money is not a form of speech,” Tiffany said. “[It] would overturn Buckley v. Valeo from 1976, and it would also say for the first time in 124 years that corporations do not have civil rights that the framers of the constitution meant for human beings, for we the people.”

Ute Ritz-Deutch, coordinator of the Ithaca chapter of Amnesty International, said human rights tie into labor rights. She said everyone deserves the right to work and the right to fair compensation, and the community needs to be active in protecting these rights.

“There are a lot of rights that people have in this country that are protected federally and also on a state level, but they may not realize that they have these rights, and so for undocumented workers, they are extremely vulnerable,” Ritz-Deutch said. “If they complain about working conditions, they may lose their job. Oftentimes employers may threaten to turn them in, meaning to have them deported, so it’s a very vexing problem.”