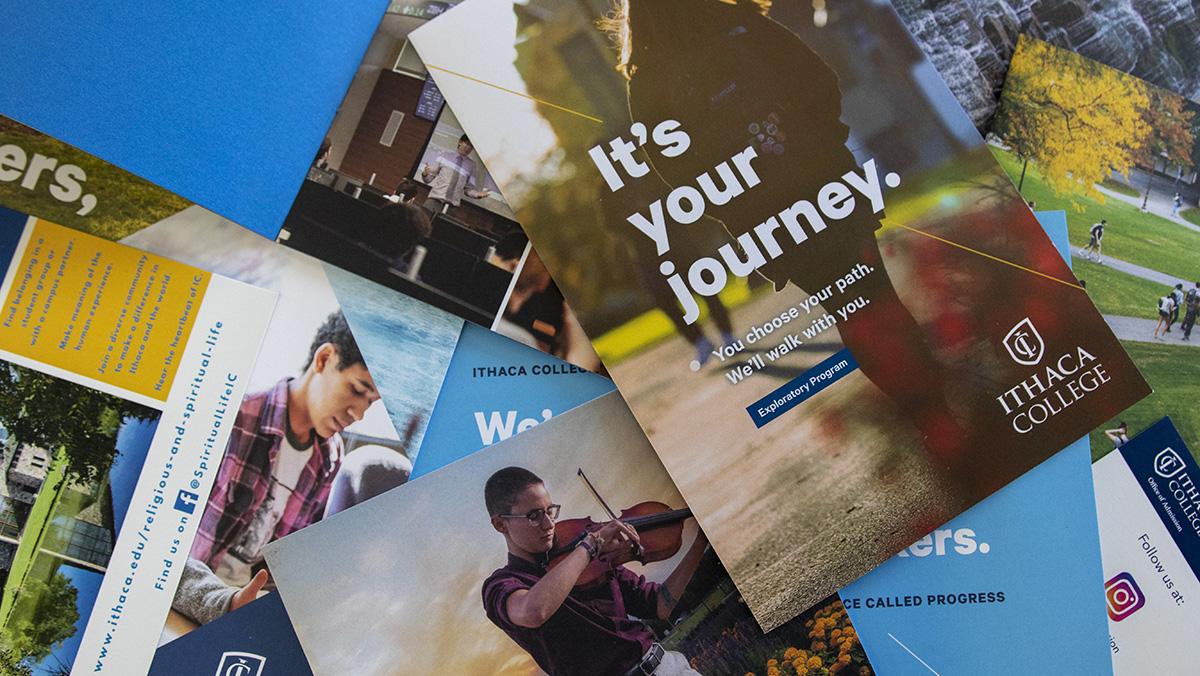 Photo Illustration by Nolan Saunders/The Ithacan
The college is expanding on its strategies that increase yield while utilizing new marketing campaigns to increase enrollment and initiating outreach to students to improve retention. Since Fall 2018, enrollment has decreased from 6,517 students to 5,054 students in Fall 2022 — a 22% decline — according to the college’s Office of Analytics and Institutional Research.
By Noa Ran-Ressler — Staff Writer
Published: October 26, 2022

Ithaca College’s enrollment has exceeded its target in Fall 2022, but campus administration is still working on solutions to increase prospective student engagement and retention.

The college is expanding on its strategies that increase yield while utilizing new marketing campaigns to increase enrollment and initiating outreach to students to improve retention.

According to Laurie Koehler, vice president for Marketing and Enrollment Strategy, yield increased by three percentage points, from 11% in Fall 2021 to 14% in Fall 2022. She said the college exceeded its budgeted enrollment targets for Fall 2022 because of the unusual increase in yield. Yield rate is the percentage of accepted students who decided to enroll at the college.

“When we talk about yield, and we look at what happened this year, we focused on two big areas,” Koehler said. “… One was around financing [the college’s] education and the value of an Ithaca [College] education. The other was the campus visit, because it’s very hard to come here and not feel what’s so special about the place. Our communications were geared toward encouraging students to visit.”

Koehler said the college’s strategy to be more accessible for BIPOC communities involves eliminating the College Board’s CSS Profile as a requirement for financial aid because of the time and resources it requires to complete. According to New America, the CSS Profile has 100 more questions than the FAFSA and costs $16 per college the student sends it to, unless students qualify for a fee waiver.

“We saw it over and over again as a barrier, particularly to students from middle- and low-income families,” Koehler said. “… It’s confusing. The FAFSA itself is already confusing enough, but we have to require the FAFSA for federal aid dispersal.”

Nicole Eversley Bradwell, the executive director of admission at the college, said the college took a similar initiative in 2012 when it went test-optional. She said applications increased not only for BIPOC students but other populations as well.

“We’re really doing things that we hope are creating accessibility for all students and looking at 100% in terms of engagement and encouraging students to consider Ithaca College,” Eversley Bradwell said.

Koehler said the on-campus senior and graduate housing option was another effort by the college to make campus more accessible for students.

“We make sure we provide opportunities that keep them here,” Koehler said.

Eversley Bradwell said the college’s open house Sept. 24 registered 489 people — including prospective students and their guests — and over 850 people registered for the open house Oct. 10.

Sophomore Paige Morrissey, an admissions host and tour guide, said she noticed more families coming for tours as the Common App deadline approaches — which is as early November 1 for early decision applicants — and holidays mean high school students have time to visit campus.

“Our first [open house] in September was extremely slow and we had a huge no-show rate, but … [October] was one of our most successful events ever,” Morrissey said.

Morrissey said the increase in attendance in October was a combination of factors.

“We definitely notice more engagement as the dates get closer to the deadline of when to apply,” Morrissey said. “People have more questions on Ithaca-specific things as well as more interest in activities on campus.”

Gore said the four-year plan will hopefully help with retention numbers, but the impact can not be evaluated at this point and it will take years before the impact on retention can be seen.

Koehler said a factor that contributed to an increase in prospective students attending campus and likely contributed to the increase in yield was a $500 start-up grant. The grant was given to students who were admitted, visited campus and then enrolled. Many students found out about the grant at the admissions event as an incentive to enroll.

First-year student Shannon Tonetta said she attended an accepted students admissions event in April 2022, where she found out about the start-up grant from President La Jerne Cornish’s speech at the event.

“I had no idea about it before coming, so it was a nice surprise,” Tonetta said. “It played absolutely no role in me choosing [the college], but I did appreciate the gesture.”

Tonetta said she was disappointed to hear that the college was giving out the money to anyone who attended the admissions events.

“I begged for more [financial aid] and they said they had absolutely none to spare, then say they will give out money to anyone who came to an event,” Tonetta said. “There are people who would have really appreciated that money who probably didn’t get to see it.”

Collaboration with Other Colleges

Tara Bubble, the dean of admission and financial aid at Colgate, said it is too early to measure the impact of international travel opportunities.

“The real impact of that will be measured later in the cycle when we see what happens with applications and yield for students in those areas,” Bubble said.

Koehler said Ithaca College is also increasing outreach to rural students from the upstate New York area. According to Koehler, in Fall 2021, the college saw significant declines in enrollment of students within a 50–100 mile radius of the college. She said the college spoke with public and private school counselors and independent college counselors.