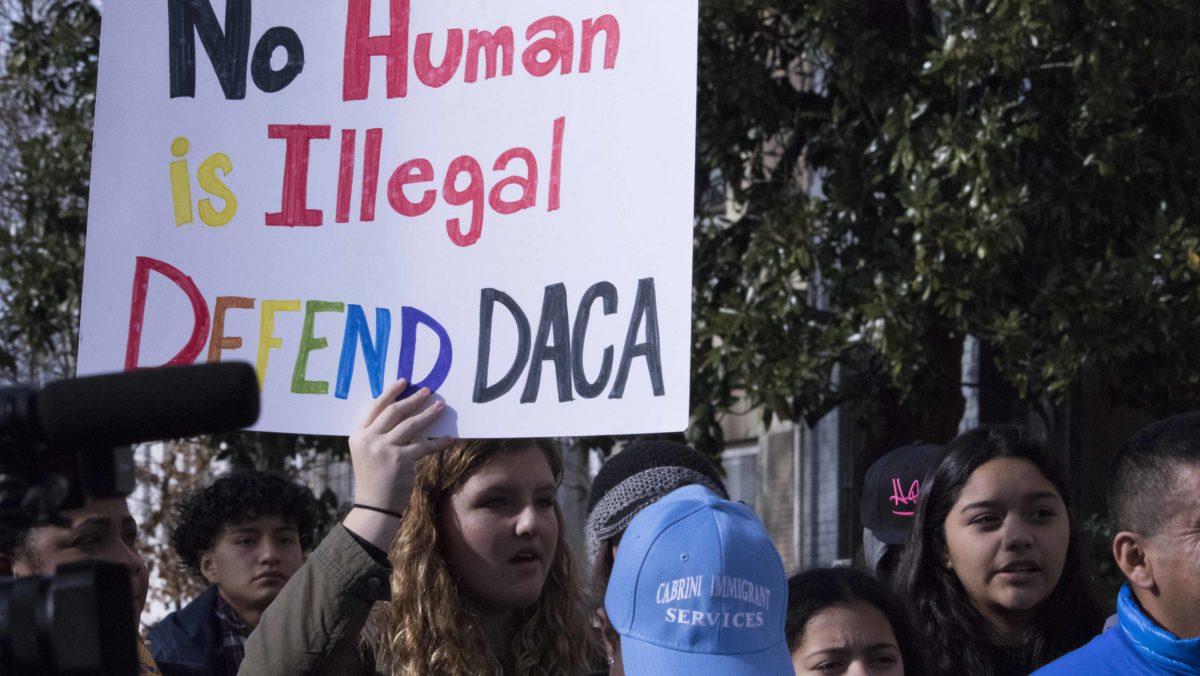 Eden Strachan/The Ithacan
Freshman Eden Strachan writes that white allies must acknowledge their privilege to make change, like at the DACA rally pictured above.
By Eden Strachan
Published: February 28, 2018

“Take one for yourself and another for your neighbor; we’re going to need them,” one of the Rapid Response leaders said as they passed out immigrant rights pamphlets.

I was so excited to be a part of this initiative. Community involvement is important to me and I have always believed in standing up for people who are being oppressed. When I think about activism and community engagement, I think about Martin Niemöller’s famous quote:

“When they locked up the social democrats,

I was not a social democrat.

Then they came for the Jews, and I didn’t speak up because I wasn’t a Jew.

When they came for me, there was no one left to speak out.”

My takeaway from this quote is just because it isn’t happening to you doesn’t mean it’s not happening. I never want to turn a blind eye to what’s happening in my community, but at the Rapid Response meeting, I was reminded that it may not be safe for me to be so involved.

At the meeting, we separated into small groups based on what role we wanted to take in the event that a Rapid Response would need to be initiated. I decided that I would like to be one of the first responders at the scene documenting what was happening though notes, photo and video.

One of the white ladies in my group turned to me and said, “I am really happy you’re here. It’s good that you are doing this. I just want to say though, if there is a problem, I think you should stay back. Don’t go too close because you could get hurt. For me, I am in a position that I have a leniency with the police,” she said as she pointed to her skin.

I was taken back. I didn’t know how to respond. I believe this lady said this to me in good faith, but that didn’t make it hurt any less.

As a female who identifies as a minority, I understand that the color of my skin may play a role in how people perceive me. I have come to terms with that; however it bothers me that because of my race I cannot be involved in supporting other oppressed individuals.

This poses two problems — number one, the fact that systemic racism still exists in our communities, and number two, that for trying to support another individual, I could also be harmed.

Being an activist as a minority presents more challenges than if I was not a minority. Considering this, to help others, I may be putting myself in danger. Until that Rapid Response session, I had never thought about that. I think it is important to share this experience because it helps to highlight the state of our community and country as a whole. It makes us more aware of the racial disparities that are still going on today. It also challenges us to see Ithaca without rose-colored glasses and acknowledge that race is still a problem and it needs to be addressed.

I appreciated the approach this woman took to addressing this reality. She kindly pulled me aside and addressed her concerns for my safety — not in a way that was offensive, but in a way that showed that she cared. This is the kind of allyship that I think we all should try to emulate. When white allyship is discussed, the problem of “white saviors” also tends to surface. I get the point, but she wasn’t trying to be a “white savior.” She was trying to use her resources to help someone that was working for the same cause. I genuinely appreciated that, and I hope to hear and see more of that kind of allyship in our community activism here in Ithaca.