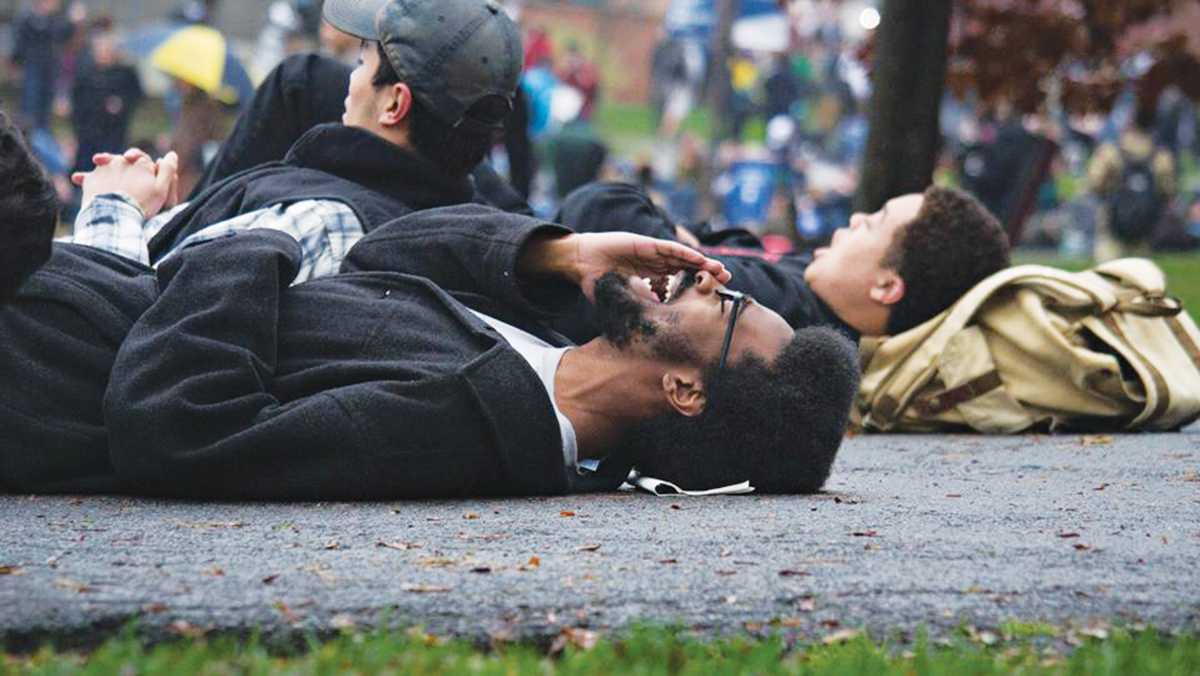 Emma Rizzo
Alumnus Dubian Ade, who graduated in 2015, lies down and chants in protest at the POC at IC walkout and die-in that took place Nov. 11.
By Dubian Ade
Published: December 2, 2015

It was this time last December that a student group called the Collective organized a popular movement that would take them down the halls of the Peggy Ryan Williams Center to confront the president of Ithaca College. There was anger and there were tears. A comrade even got on one knee before our president. And it was then that President Tom Rochon showed us, as he has shown all students who have passed through this institution in the eight years of his tenure, that students of color are not his priority. His exact words were, “This is your issue.”

It is a movement that is in sync with a larger national movement. It must first of all be stated that POC at IC is not an outgrowth of the student protests at Mizzou. Organizing had begun at the very start of the academic year with the protests in opposition to campus safety. Yet the events occurring at Mizzou, Claremont McKenna, Amherst, Atlanta, Bard, Brandeis, Brown, Clemson, Dartmouth, Eastern Michigan, Emory, Harvard, Johns Hopkins, Michigan State, Missouri State, NYU, UC Berkeley, Notre Dame, UCLA, Webster, Yale, etc. only strengthen the POC at IC movement. And the necessary student coalitions are already forming.

Everywhere it is the same story: Campus racism and white supremacy are facilitated by a top-down administrative structure that is undemocratic, corporate, exclusionary and ill-equipped to address structural racism on a meaningful level. Students of color from all over the country recognize that if white supremacy will not be held accountable by the administration, then the necessary changes will be brought about by the students themselves.

But let’s return to the protest movement at Ithaca College that breathes life into the campus body every second that Rochon remains in office. If one observes closely, one can see that the changes are already being made. The people have transformed themselves into the very embodiment of the movement. There are talks of rich discussion happening everywhere on campus and at all times of the day. It is nearly impossible to remain neutral about this issue. The students speak, defend, argue and critique, and they do so bluntly and without hesitation. The faculty come forth into the sunlight, offer their support and make themselves and their grievances known despite the enormous risk. It is this crucial shift that will define the campus climate to come.

It has been said that such a climate is anti-intellectual. The irony is that this is perhaps the most intellectually engaged students have ever been with campus affairs in the college’s history. It has been said that the movement discourages dialogue. Yet it is the unproductive dialogue between POC protesters and white supremacist power that has been discouraged. It has been said that the movement lacks vision and concrete goals. Yet the removal of a college president is the most concrete a goal can get. Moreover, the organizing of a mass popular movement is an unfolding process that is constantly leaving room for creation.

Many have said that removing Rochon will not solve racial tensions on campus. Such people misunderstand and underestimate the power of mass action. It is not simply the removal of Rochon that is significant. The very act of demanding his resignation opens the door for the radical reconfiguration of top-down administrative power. If Rochon is to resign, it is because the people command it to be so and have placed the necessary pressure on both the board of trustees and the administration. The result is an effort to bring power and influence back into the hands of the campus body. It is the effort to democratize a campus that elects neither its president, nor its board of trustees.

The no confidence results are in: Over 71 percent of students who voted have said that they have no confidence in President Rochon. The faculty results are coming in mid-December. POC will not wait a second longer for makeshift initiatives or the hiring of more chief diversity officers. They will not wait another eight years to talk when talk has been strategically used to keep the people in a perpetual state of docility. If the students of color are not a priority at Ithaca College, then POC students will radically change the administrative structure so that it is a priority.

As an Ithaca College alumnus, I stand with POC at IC and urge President Rochon to consider immediate resignation.

Dubian Ade is an alumnus who graduated from Ithaca College in 2015.