Commentary: Avoiding the truth about Palestine only causes harm 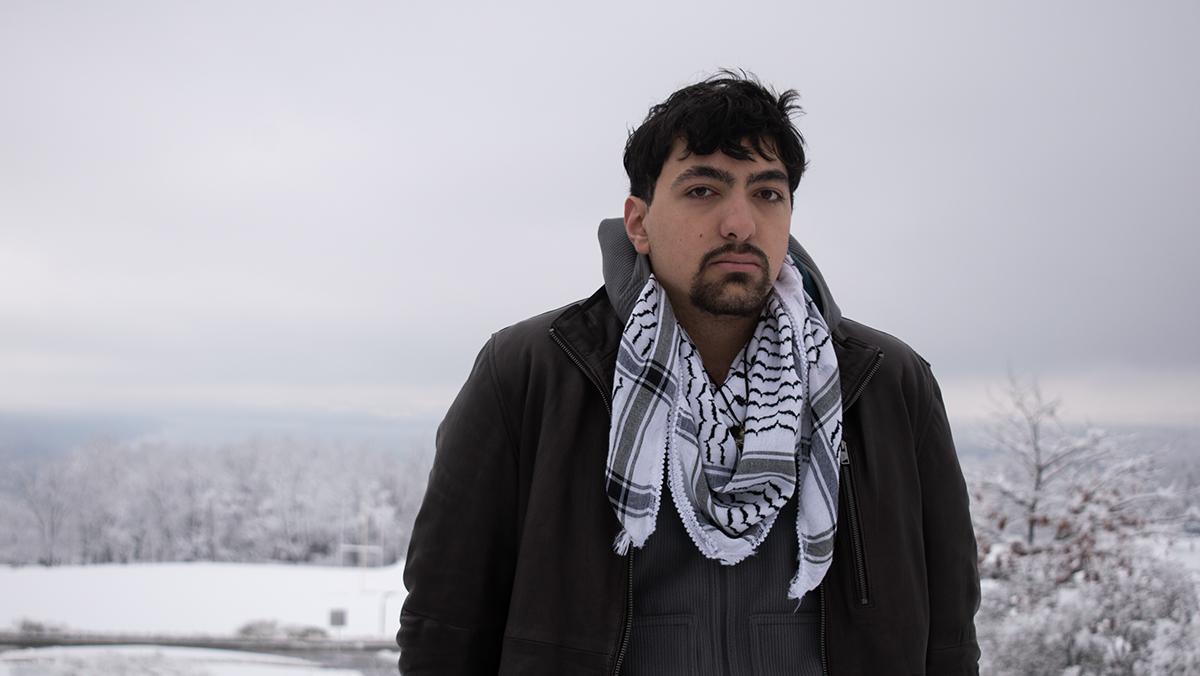 Nolan Saunders/The Ithacan
Sophomore Richard Martin feels unsettled with the community’s ignorance toward the distruction of Palestine. He shares the effects this ignorance has on his identity.
By Richard Martin
Published: January 24, 2023

Editor’s Note: This is a guest commentary. The opinions do not necessarily reflect the views of the editorial board.

“From the river to the sea, Palestine will be free.” These words are not just a catchy slogan but a promise. A promise made to our parents and grandparents. For me, it is a promise to my mother and grandmother, that their homeland will once again know peace. We are proud Christian Palestinians who will never stop reminding the world we exist. My mother once recalled to me when the king of Jordan invited her and her cousins to visit Palestine. “You’re going home,” my grandmother told her. Home.

To many Americans, Palestine is the fantastical Holy Land that gave the world Judaism, Jesus and Christianity. To my mother, it is her birthplace and the source of who she is, as well as who my sisters and I are.

The U.S., along with other imperial powers, have defended Israel for decades, no matter what crimes it commits against the Palestinians. It did not matter that in order to create the state of Israel in 1948, the military had to ethnically cleanse 750,000 Palestinians while killing up to 15,000. The killings did not stop in 1948, however. It also did not matter when they killed 67 children in the 2021 Gaza bombings. Nearly every day I check social media to learn that another one of my mother’s people has been murdered by the apartheid regime of Israel. And make no mistake, Israel is at best an apartheid state, as said by human rights organizations and UN experts, as well as South African allies.

Some of the most horrific images I’ve been exposed to come straight from Palestine: the remains of children after a bombing, people shot down in the street and the results of putting someone in solitary confinement for a year straight. The most revealing part is that these horrors are so frequent that I have grown used to it; a day without a death is a pleasant surprise.

For Palestinians and our Arab and Muslim comrades, our hearts ache for a free Palestine. Keffiyehs and Palestinian flags covered the stands at the Qatar World Cup, a sign of unity among the global south in support of Palestine. While nearly the entire world has opened its eyes and sees what is being done to Palestinians, residents of the U.S. are determined to either ignore or justify it.

Experiencing ignorance comes with the territory of being Palestinian. Revealing oneself as a Palestinian is like a game of Russian roulette with four chambers loaded; will they start a discussion about Israel? Will they randomly ask me to condemn Hamas when I have nothing to do with them? Will they talk about the Palestinian Liberation Organization and terrorism? Will they ask the typical questions about being Muslim, despite the fact we are Christian Palestinians? My family and I have all encountered these, and more. The best-case scenario is they have no idea where Palestine is, and I can simply say, “It’s where Jesus was from.” Unfortunately, the best-case scenario is also the rarest-case scenario, and Palestinians are seen as Arab terrorists. TSA pat-downs and random checks. 9/11 jokes. And if I hear another line from Aladdin, I’ll go insane.

The politicization of any group, be it by skin color, religion, gender identity or sexuality, is not something to be taken lightly: it is a threat. If you politicize an identity, you have exposed that identity group to the threat of erasure. Palestinian identity has been thoroughly politicized and demonized. For a time, I avoided disclosing where my mother was from because on multiple occasions, I could see professors get uneasy at the word “Palestinian.” In no way do I feel that those particular professors were revealing some personal bias against Palestinians, but rather they know the mention of it could spark a debate. I am at least more fortunate than my mother, who had a teacher call Palestinians terrorists on a school handout. It was only removed after my grandfather went to the school and demanded its removal. I have also avoided being called a “camel jockey” or other derogatory slang and slurs, but others I know have not been so lucky.

Anti-Palestinian racism is a grossly under-discussed issue. Our voices are constantly spoken over no matter how loud we shout. Of course, we are not alone in being overlooked. Tragically, Western Sahara also suffers from colonialism, and Armenia is constantly attacked and threatened by its neighbor. Ithaca College and our fellow Americans have some crucial self-reflection to do. Because right now, your silence tells us our lives don’t matter. Do you think we matter? Then show us.