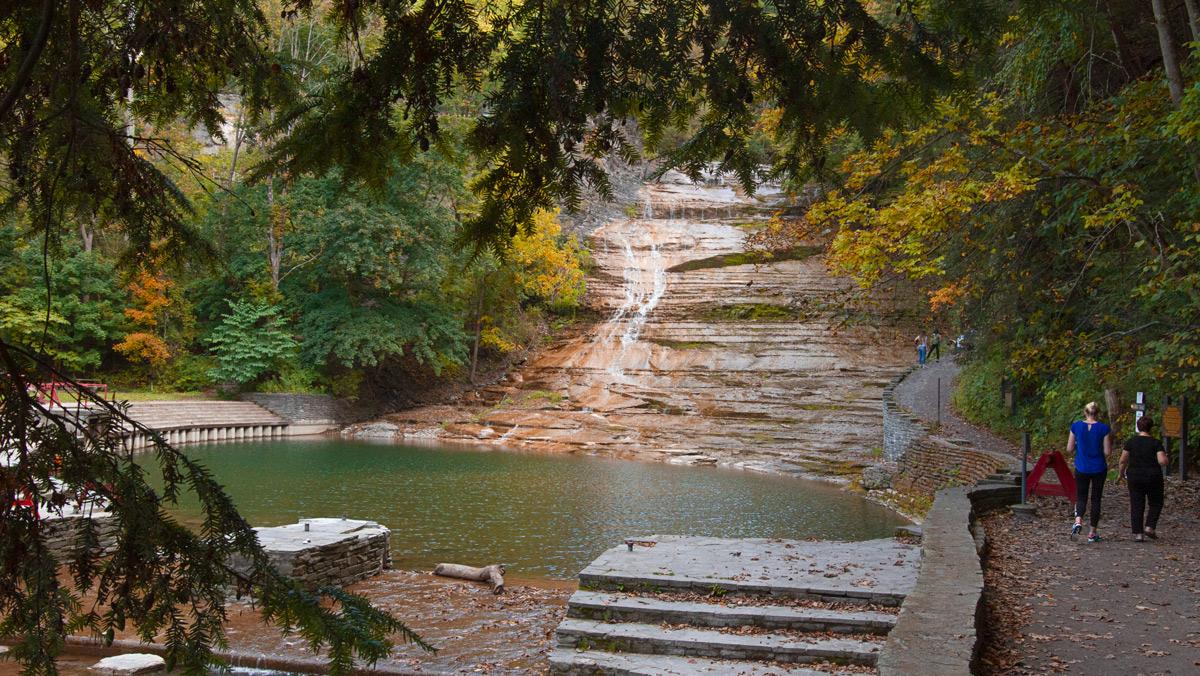 Growing up in Ithaca, it’s not abnormal to hear about drowning deaths. “Man drowns in Ithaca Falls” or “Cornell University student commits suicide” are headlines that are horribly normalized by those in the Ithaca community.

Every waterfall has its own designated areas for swimming. On most trails, there are signs saying “Swimming prohibited without lifeguard present,” or something along those lines. Many people ignore these signs and go about their swimming, mainly because they aren’t aware of the true dangers.

Growing up, my parents always told me that I better not swim in restricted areas. They hated it when I would go to Second Dam with my friends to swim. I would go anyways because that’s what people do in Ithaca.

It wasn’t until I saw a student-athlete from Binghamton University drown in Ithaca this summer that I truly realized how unsafe it is. His name was Calistus Anyichie.

My best friend and I were hiking the main trail at Buttermilk Falls State Park on July 14, 2019. We passed a large group of friends who were swimming at a small waterfall on the Buttermilk Falls trail. Once we headed back down the trail, we heard screaming. I watched Calistus go under, come back up, and then go back under. As I was on the phone with 911, I watched his body be pulled out of the water. I watched the first responders bring his body up to the ambulance. I sat on the ground, watching each of Calistus’ teammates pace back and forth, crying in complete distress.

Throughout dinner, I sat there thinking over and over about whether or not Calistus would make it. Shortly after I got home, I was told that Calistus did not make it. After I was able to calm down, I had to tell my best friend the news. She was so devastated that she was unable to form words. Hearing that this incredible life was lost in our hometown was heart-wrenching, unbearable even.

Watching this 19-year-old man lose his life in my hometown made me view Ithaca as a town full of ghosts rather than a town full of beautiful waterfalls. It also immediately brought my attention to the lack of response and action taken by the Ithaca community. No one I knew talked about it, and nothing was done.

I never met Calistus. He doesn’t know my name; he doesn’t know what my voice sounds like or where I grew up. I know Calistus though. I know he was born in Enugu, Nigeria. I know he moved to the U.S. when he was 15. His main goal was to become a diplomat so that he could build go back to Nigeria and use his platform to build schools. He would text his high school basketball coach saying, “Thank you” and “I love you” on Father’s Day and birthdays. I could go on. I could go on about how helpful he was to his host family.

I could go on about how he viewed his basketball team and loved them. I could continue on about his hopes, dreams, and goals; but I won’t … because I didn’t know Calistus. I learned his name from his friend who told me when I was on the phone with 911. I know where he was born, why he came here and what his goals were from the countless articles I read after he passed. I know his kind acts to others from the wonderful authors who put his soul into words, but I never knew Calistus.

Not 24 hours after Calistus died, there was another group of teenagers swimming at the same spot. Almost no one knew there had been a local drowning.

This infuriates me. Why is it that in my hometown, nothing is done for a death caused by our local attractions? He was more than just a Nigerian man from SUNY Binghamton. He was Calistus Anyichie: a man with hopes, dreams and goals. He was a special soul lost in my hometown.

We can’t bring back the lives of those who have passed, but we can prevent future deaths. We must work to raise awareness about the dangers of the waterfalls in our community, awareness that could ultimately save lives.