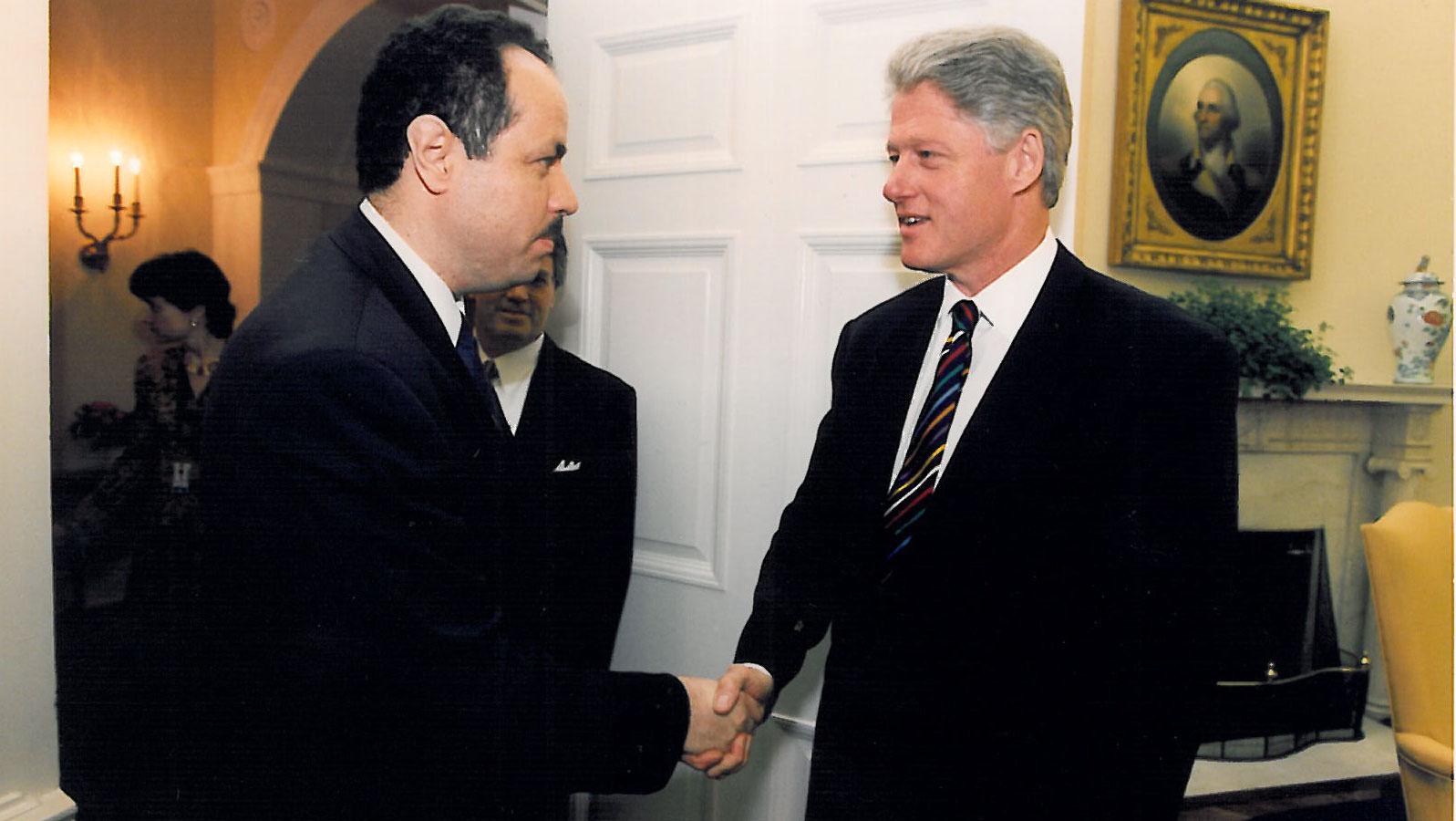 Courtesy of Keith Watters
Keith Watters ’76 meets President Bill Clinton in the Oval Office in the spring of 1997 after attending a White House briefing, along with other major national bar association presidents.
By Keith Watters
Published: January 27, 2016

Forty-four years have passed since I attended Ithaca College as a freshman. In the ensuing years I received many blessings, which in large part I credit to Ithaca College. Sadly, I am writing today because some members of the college community are at odds with one another.

My childhood was challenging. Growing up in a children’s home as a multiracial child in the 1950s and ’60s was a lot different from the multicultural world of today. The 1960s saw a watershed of change in America. The civil rights, feminist, anti-war and anti-poverty movements forever changed our country. Progressive colleges, like Ithaca, also were changing society by proactively seeking out and admitting students of color and/or students from economically disadvantaged backgrounds. For over 50 years the college has continued to be a leader among private colleges with its diverse student body.

It was hard to fit into college because all of my roommates had attended exclusive preparatory schools. I credit my success in college to professors like Carl Sgrecci, who inspired me to do my best and treated everyone with the utmost respect. The educational opportunities at Ithaca enabled me to attend law school. I went on to start my own practice and was elected President of four bar associations, including the National Bar Association. The NBA is the nation’s largest association of African American jurists and represents over 66,000 attorneys and judges. Ebony Magazine has named me one of the top one hundred most influential African American leaders.

In 2000, I was elected to the Board of Trustees and served successive terms until 2010 during the terms of Presidents Williams and Rochon. Trustees are selected by the Board, based on their commitment to the college, expertise, and noteworthy career achievements. During my tenure as a trustee, I forcefully advocated for a diversified college, greater financial aid, and above all else that students, faculty and staff be treated fairly when dealing with the administrators of the college.

Students, faculty, and staff elect trustee representatives. The Board leadership and administrators always sought to reach a consensus with all trustees before reaching a decision or voting on important matters. A consensus was often arrived at after a careful review of the facts and after rigorous debate and consideration of alternative points of view or approaches.  As in life, when views differed, a compromise was reached. For example, a consensus was almost always reached on the amount of tuition, financial aid, salary increases, capital expenditures and other campus issues. This consensus-building approach ensured that the entire college community was consulted and participated in reaching decisions. The success and stellar reputation of the college bears witness to the success of Ithaca’s long–standing governance structure. Moreover, the structural challenges facing private higher education will make a collaborative approach essential to the continued success of Ithaca College.

The atmosphere on campus has taken an unsettling turn. Dissent has taken the place of debate. This is unfortunate since all parties must listen to one another with an open mind and give fair consideration of one another’s views. The entire community shares a joint responsibility to ensure that the college is free of bias and that all issues and concerns are fairly vetted and addressed. As I listen to any debate, I am more likely to be convinced by factual, sober, and cogent proposals for change. Hopefully, in 2016 all concerned will embrace a consensus approach, a period of self-reflection, and a renewed spirit of unity and dedication to their common educational mission.

Keith Watters is the president of the Foundation of the Bar Association of the District of Columbia and a 1976 graduate of the college. Email him at keithwatters@verizon.net.