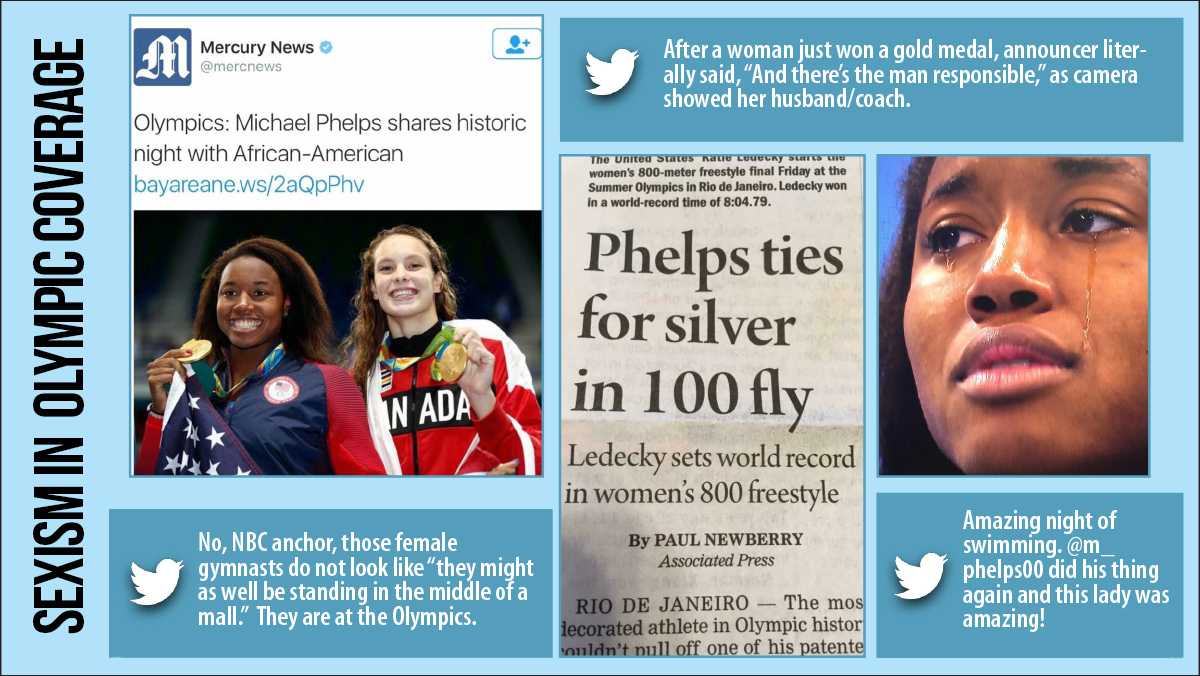 They seem to end as soon as they begin. The Olympics have come and gone and won’t be back again until February 2018, when Pyeongchang, South Korea, plays host. The Olympics are easily my favorite sporting event. I grew up watching the Olympics and was fortunate enough to spend the last month of the summer interning with the digital production department at NBC Sports for the Rio Olympics. Although the last Olympic Games were only two and a half years ago, I didn’t seem to notice what seemed to be so prevalent this year: critiques of media coverage of the Games for being sexist toward different female athletes.

One of my favorite parts about the Olympics is the fact that women finally get a platform to demonstrate incredible athleticism that is equivalent, if not more than, some of their male counterparts. For the rest of the time between Olympic Games, it seems as though attention is only ever paid to individual male athletes or professional sports teams composed of men. Think about it: when’s the last time you ever saw a female sport being covered on the primary network of a company, whether it’s CBS, ABC, NBC, FOX, or even ESPN? Sporting events showcasing female athletes are generally designated to divisions of the main network (such as ESPN 2 or ESPN 3). Networks operate in the ways that translate into the greatest opportunities to generate revenue, and our society has placed a greater emphasis on sports featuring men than women.

That’s why the Olympics are such a great opportunity for the world to see not only women that are phenomenal athletes from the United States, but from across the world. However, even during the sporting event that ideally should consider all athletes equally for the accomplishment of being an Olympian, women are treated in ways that men will never be.

Take, for example, the criticism Gabby Douglas, a 2016 Olympic gold medalist for her contributions to the women’s team all-around competition and the 2012 Olympic individual all-around champion, received for standing on the podium without her hand over her heart during the playing of the national anthem during the medal ceremony. People took to social media to criticize her for her lack of respect and patriotism for the country. However, no one said a word when two members of the United States Olympic Team competing in men’s shot put stood without their hands over their hearts, just like Douglas, on the gold and silver podiums during the national anthem. Why did people not attack these two men as they had Douglas? It’s all systematic. If you can believe it, there are actually people in this world that label women, and particularly women of color, as targets purely based on their gender and race. So in the eyes of these social media critics, it was easier to take shots at Douglas than the two white men standing on the podium, even though all three exhibited the same behavior on the stand.

The ridiculousness doesn’t stop here. A newspaper headline made headlines itself when it listed news of Michael Phelps tying for silver ahead of Katie Ledecky winning gold and setting a new world record. I get that Phelps is the greatest Olympian of all-time in terms of medals won, and that him winning anything less than gold is rare, but it would be nice if Ledecky’s record-breaking swim was the bigger news in this particular situation. There were also instances of women being referred to through their relationship to a male athlete that may be more recognized than giving the female athlete full recognition herself.

Something I’ve learned through taking classes on racism, sexism, and sport sociology (shout-out to Professor Farrell’s Social Aspects of Sport class) is that even the sporting world can’t escape discrimination. What’s even worse to me is the fact that an event such as the Olympics, which prides itself on the unification of countries around the world, can’t overcome sexism either. If you start paying attention to sports, you’ll really start to see that they are a microcosm of society that includes both the good and the bad. We’ll see how female athletes are treated in another year and a half when they finally get the spotlight again for the 2018 PyeongChang Winter Olympics. Until then, we’ll resort to watching male athletes get the attention again.

Russian’s crackdown on gay rights protest are exposed by media around the world through social media, and that has changed my perception of gay people…
When I came back to the U.S.