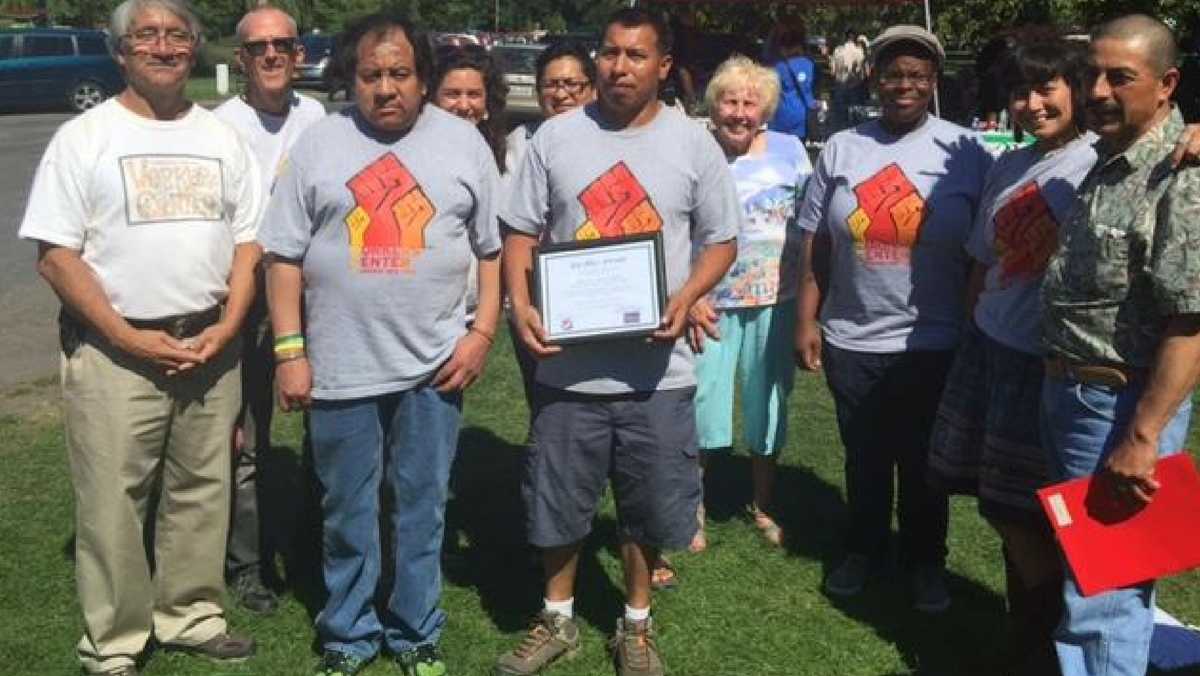 On September 5, 2016, the Tompkins County Workers’ Center and Midstate Central Labor Council hosted the 33rd annual Labor Day Picnic at Stewart Park in Ithaca, NY. This year’s picnic celebrated “Labor Rights are Civil Rights” as its theme, and highlighted the Black Lives Matter (BLM) movement in particular in its program.

As with many events that have highlighted the BLM movement, the picnic drew some controversy in weeks leading up to the event. That actions which place a focus on inequality are so predictably lightning rods for manufactured controversy in and of itself highlights how important it is to sustain this focus in public spaces. This is not news to the labor movement.

Workers have had to engage in cycles of pressuring those with control over their livelihoods throughout history. At its most extreme, worker exploitation reduces people to property compelled to involuntary work, as with America’s brutal legacy of enslaving people of African origin. Unconscionably, this falls within a cycle of societies enslaving other people, abolishing the practice, and then doing it again. While the 13th Amendment to the U.S. Constitution formally abolished slavery, labor trafficking (slavery) is still very much a part of exploitative labor practices today, and occurs even in communities like Tompkins County, New York.

Outright slavery, however, is only an expression of worker exploitation, and the modern history of labor is defined by ongoing struggles to ensure that all people can experience fair treatment at work and access the necessities of life. The movement’s policy triumphs include the U.S. Fair Labor Standards Act of 1938, which affirms people’s right to income sufficient for the “the minimum standard of living necessary for health, efficiency, and general well-being” among other rights; and the 1948 United Nations Universal Declaration of Human Rights, which includes provisions such as those that everyone has both “the right to work, to free choice of employment, to just and favourable conditions of work,” and to reasonable limitations of working hours.

It should perhaps be enough to declare that “everyone” is entitled to these rights. Labor history nonetheless shows that it is continually necessary to expose and to address the ways that rights and protections do not apply in a practical sense to all people. The Civil Rights Act of 1964 prohibits employment discrimination based on race, color, religion, sex, or national origin precisely because of the truth that those rights available to “everyone” are not, in fact. Workers must continually contest discrimination that is either socially acceptable or merely something that employers get away with.

Wage theft occurs on an order of magnitude greater than all other forms of theft in the U.S., combined. In the ongoing fight against gender discrimination, it was only in 2015 that New York State approved the Women’s Equality Act, and fair employment practices and equal pay for equal work for women remain hotly contested. Only twenty states prohibit discrimination on the basis of sexual orientation, and lesbian, gay, bisexual, transgendered people widely remain acceptable targets of discrimination. Workers in specific industries, such as farm workers and especially migrant or immigrant farm workers, are exempted from the same rights as others. The legacy of American slavery continues through an unbroken legacy of policies and practices that ensure a marginal place for black people in the country’s economic life, and requires comprehensive remediation.

Labor laws establish rules of conduct for employers, and campaigns to pass them are laboriously won because society tolerates the prejudices that they forbid employers from acting upon – and the existence of protections is not even a symbolic end to oppression. Only when everyday people act to ensure that violations are exposed and these protections are actually enforced can they serve as effective deterrents to exploitation. Deterrents themselves are merely intermediary steps: they cannot achieve a social transformation that can only occur through people working in concert to confront and end prejudice and exploitation in their immediate environments.

That “Labor Rights are Civil Rights” may not be news to the labor movement, but it is very much current. It’s our shared obligation to ensure that they are practiced.