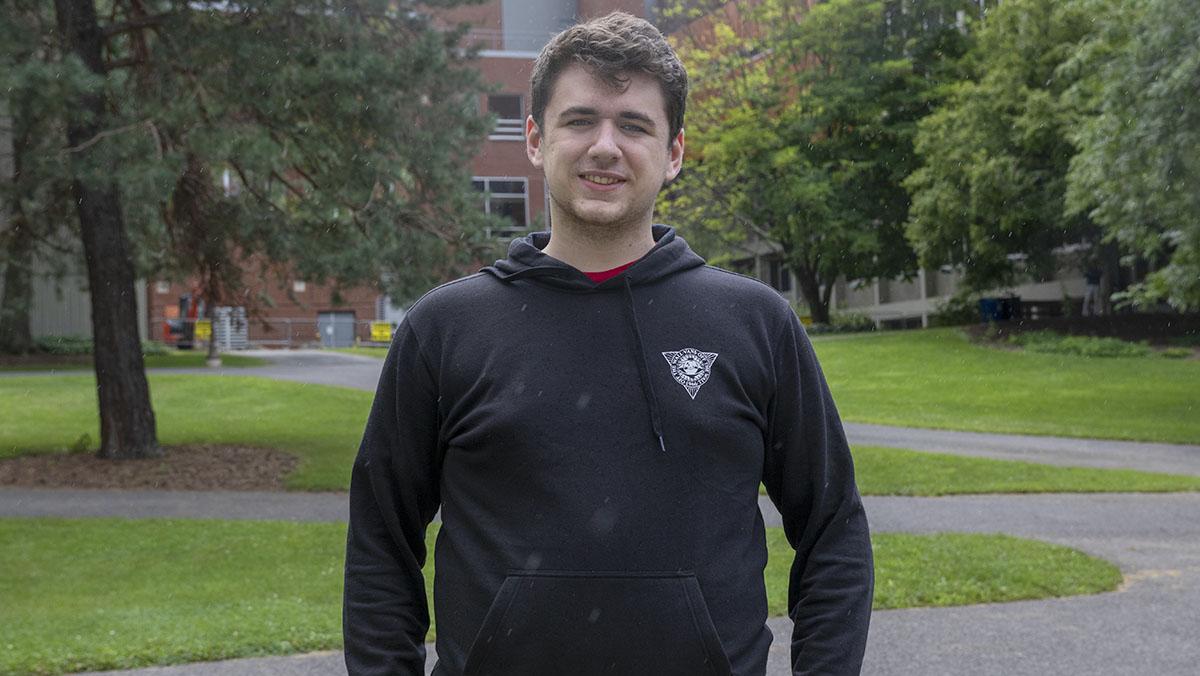 Alyssa Beebe/The Ithacan
Sophomore Peter Gillen, reflects on transitioning at Ithaca College from a hybrid collage experience to an all in-person experience. He discusses the way he had to adjust to the new college normal but remains cautious
By Peter Gillen
Published: September 2, 2021

Despite being in my second year at Ithaca College, I feel like I am just now starting to experience what college is truly like. The entirety of the last year is definitely not what college should be for anyone. Being stuck at home while listening to clearly intelligent professors fumble around with software that they had almost no idea how to use is a painful way to experience what should be a very transformative time for anyone. This semester is definitely an improvement to being hybrid or all online, but how packed the school is now in comparison to last semester is insane. It never fully registered for me that the school was at about 40% of its actual capacity. This is the only downside for me — it’s going to be harder to enjoy the quiet beauty of Ithaca’s campus. I used to go out on runs during the afternoon or late at night and be able to admire the lush landscape and beautiful views from the hill. This semester, many students can be seen roaming South Hill late into the night.

During the last two semesters, I never communicated much with others from my classes, but now it seems much easier to talk with classmates about anything. In Fall 2020, on a platform called Discord, I met Ithaca students that were all a part of a server. If you are unfamiliar with Discord servers, just think of them as less formal and more complex Facebook groups. Most of the people I met from this group were from outside of my major and I only shared classes with two of the people I met. It’s tough bonding with others when you do not have a class schedule to bond over. In the spring semester, I did start to recognize some more faces and I talked more with some people in breakout rooms, but most of the people I clicked with were still the ones I met virtually. However, this semester I feel that it’s much easier to make friends in class because instead of asking for a person’s phone number or sending a message and hoping they respond, you can just turn around and say, “Hey what’s up, my name is Peter.” I even look forward to attending my long lecture classes. However, classes like Film Aesthetics and Analysis are concerning because of the sheer amount of students packed into one auditorium. Although we still have some COVID-19 regulations that we need to abide by, they are really quite minimal and make the campus experience feel much less restrictive. The only fear I have is if positive cases start to jump up again, having everyone get reigned in again may not go over very well. As long as everyone remains careful of COVID-19, things will go well.

This semester seems to be starting off very well and it feels like a fresh start for many students at Ithaca, including myself. This semester, despite it being busy, seems way more feasible for me to get a better GPA. This new semester feels like a new beginning, especially for my mental health. For me, this semester started a little rocky while adjusting to college life again, but now it’s going much better. Despite being able to gather with friends in person, last semester there were so many fears and anxieties that made enjoying time with others so much more difficult. Aggressive RAs and the rules they had to enforce made a lounge with six people seem like a death sentence when they were making rounds. These rules — despite being justified — made the student experience last year quite miserable and really took a toll on my mental health all around. Not having to fear being written up for being in a room with someone has made this semester even better so far.

Freshmen struggle to adjust to college amid pandemic