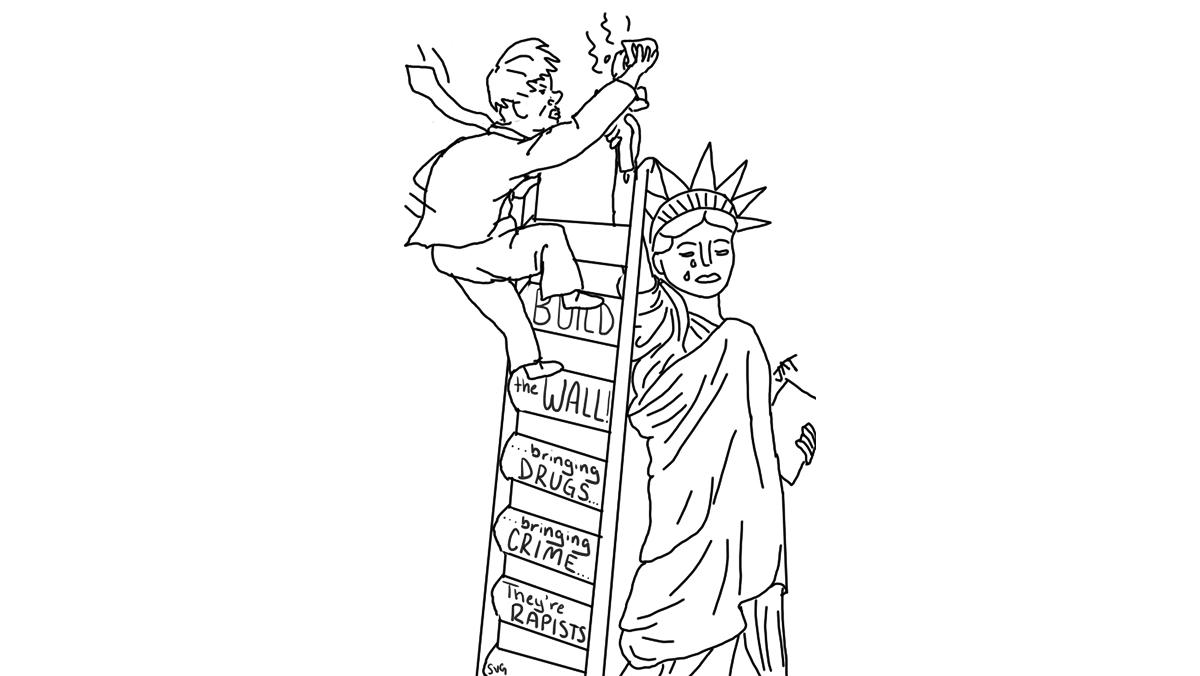 As a linguist and a Jew, it is easy for me to see how language sets the foundation for violence against marginalized people and groups. For those who are not as attentive, it may be difficult to see how words can  create violence.

Over the past several years in the United States, the rhetoric surrounding immigration has become nothing short of volatile. Statements like President Donald Trump’s “They’re bringing drugs. They’re bringing crime. They’re rapists,” paint a hyper-simplified and altogether false picture of what Mexican (and other Central and South American) immigration is. The frantic three-word battle cry “Build the Wall!” reduces the immigration conversation to a physical construct that divides “us” and “them.”

On May 8 at a rally in Panama City Beach, Florida, Trump asked “How do you stop these people?” in reference to undocumented immigrants. The response? A rally attendee shouted “Shoot them,” followed by laughter and cheers from Trump and the crowd. Statements like these are jokes until they aren’t. Language is a force of change, and the repeated rhetoric that Latinx immigrants are “invading” our country emboldens individuals like Patrick Crusius, the El Paso, Texas, Walmart shooter who was motivated by his Hispanophobia.

After constantly hearing Trump’s rhetoric, it’s unsurprising that Latinx immigrants are being torn from their homes, separated from their families and placed in unsanitary and inhumane conditions.

During the Holocaust, the enemy was not always wearing a red armband. Frequently it was non-Jewish neighbors who felt obligated to turn in their fellow community members, as they were taught to believe the rhetoric of vilification, dehumanization and anti-Semitism. Today, Trump isn’t shouting “Fire!” in a crowded theater to incite panic, but he is shouting “Build the Wall!” at a rally of impassioned Americans convinced that Hispanic immigrants are the enemy.

The only logical question that follows is, of course, “What is our responsibility as allies of immigrants?” The answer, put simply, is whatever we can do.

Words have power. If someone refers to undocumented immigrants as “illegal,” kindly remind them that no human being is inherently illegal; they simply don’t have immigration documents. If someone suggests that immigrants are “stealing jobs,” explain to them that it is not the migrant worker “stealing” the job but the exploitative boss and system that target vulnerable people and hire them at the lowest possible wages.

If you hear someone say that Hispano-Americans are “invading” or “taking over” our country, educate them on the colonial history of our country. We have colonized native land, murdered and exploited Native Americans and meddled in the affairs of Latin American countries.

The idea that we are being “invaded” by Latin Americans is bred out of ignorance of the past. The United States has repeatedly displaced indigenous and Latinx people, so it should come as no surprise that we now
have an influx of people coming from countries that we infected with violence.

As individuals in Ithaca, a primarily liberal city, it is easy to be unaware of the atrocities happening at the U.S.-Mexico border and across the country. We need to be active participants in making this country a safe place for everyone, and that begins with educating ourselves and others, examining the rhetoric we consume and maintaining awareness of the language we use.

This summer, I was invited to speak at the Ithaca Lights for Liberty Vigil on The Commons, a rally to protest the inhumane migrant detention centers in our country. There, I read a bilingual poem that I wrote
in 2017.

The message was simple: If we do not learn from the past we are doomed to repeat it. And so, I will conclude with the final line of my poem and an oft-repeated phrase by Jews around the world — “Never again. Never again. Nunca más.”