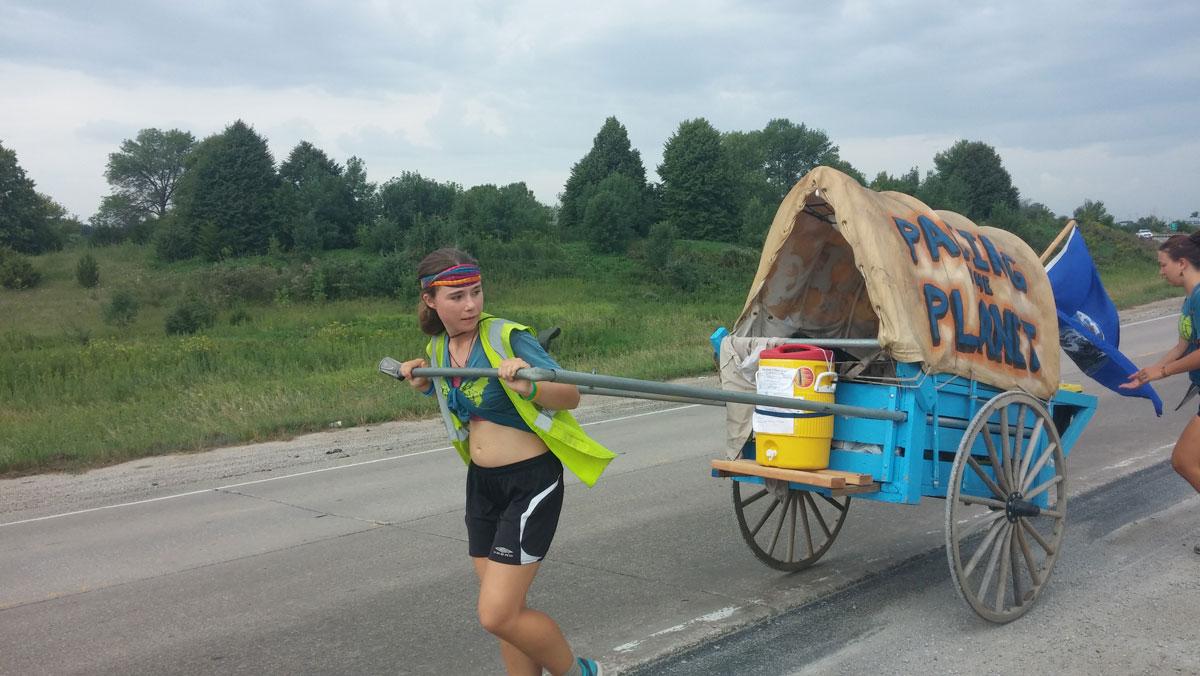 Courtesy of Faith Meckley
Junior Faith Meckley pulls a Conestoga-style wagon near Branchport, Iowa, in August 2014 as part of the cross-country Great March for Climate Action, for which she took a semester off college.
By Faith Meckley
Published: April 27, 2016

I drove myself to freshman orientation on a sunny summer day in 2013. As Route 96 turned downward and I descended into the valley, the view of the city and Cayuga Lake opening up in front of me, my iPod decided it was an appropriate moment to play “Paradise” by Coldplay on shuffle. In that moment, I felt like I had found paradise.

Now, as a junior experiencing depression, that day feels far away. I am in a constant state of stress and alarming levels of sleep deprivation, along with everyone else around me. Instead of prioritizing our personal health, we feel the pressure to make the grades on top of all our other commitments. We are expected to concentrate so much effort into so little time, and the pressure is fraying our nerve endings.

I have decided that I need to to take a year’s leave of absence. I need to heal. I had to fight myself for a long time to get to a point where I was ready to make the decision to leave. Although I knew the stress of college was fueling my depression, I felt the pressure to suck it up and stick it out. After all, what use to society am I without a degree?

My perspective on college began to change after I took a semester off to walk across the country in 2014 with a group of climate activists. With my time away from school, I hope to re-immerse myself in the activist community and invest my energy in measureable, positive change.

While I have enjoyed the many engaging discussions I have participated in within my classes for the Integrative Core Curriculum theme Quest for a Sustainable Future, those discussions aren’t solving climate change.

In these classes, we explore concepts like environmental racism — the problem of minorities’ being disproportionately affected by climate change. However, seeing the research on a screen in front of a row of desks is not the same as seeing it with your own eyes.

On Sept. 8, 2014, my fellow Climate Marchers and I walked through a low-income, Hispanic community 14 miles outside of Chicago proper. Here, we helped the residents protest outside of the waste storage facility afflicting their town with poor air quality. We marched to the gates and saw the towering piles of black soot — pet coke, the byproduct of oil refining — in the open air, with no cover. Whenever the wind picks up, the black powder blows into their community and their children’s lungs. Their local official ignores their cries for help.

Moments like this one on the Climate March taught me more than anything I have ever learned between four brick walls staring at a white board. When I returned to campus after that experience, a professor asked me to come into one of his classes and speak. When he introduced me, he said I “took a semester off to get an education.” Those words still resonate with me.

Only four months in, 2016 is on track to be the hottest year on record, after 2015 broke the record, and 2014 before that. The oceans are dying. Extreme weather is becoming more terrifying. We are in the sixth mass extinction, losing species every day — and it’s our fault. I’m finding it harder to focus in my classes. What will my degree mean to our society when New York City is underwater, I wonder?

A college degree has been marketed to us as something we need to be successful in life, but as I learned during my semester off, there are plenty of incredible things I can do without a degree. If I have the will to make something happen, I can, and I need no one’s permission but my own.

I can finish my degree whenever I want. But I cannot put my mental and emotional health off any longer. I cannot ignore the fact that trying to be a part of solving our planet’s greatest problem is far more pressing than the latest busywork I have been assigned that’s keeping me up into the wee hours of the night.

Colleges and universities have become businesses — don’t let them make you into a product. If you are unhappy, don’t be afraid to make the changes in your life that you need to be happy, even if it means doing the exact opposite of what our society expects of you.