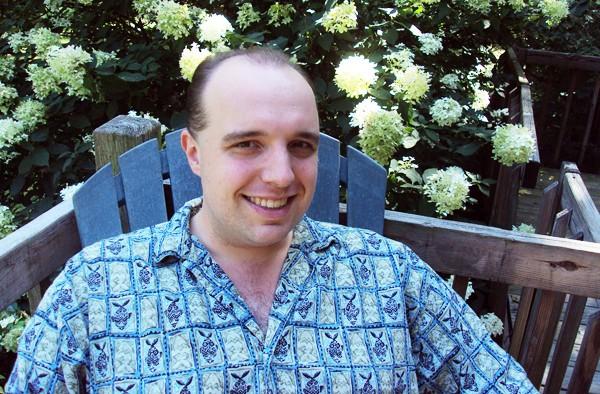 Courtesy of Douglas Booth
Douglas Booth is the founder of the Adults with Asperger’s Support Group in Ithaca. He was diagnosed with the syndrome at the age of 28.
By Douglas Booth
Published: August 27, 2012

I could always tell something was not quite right with me. I was tested, examined and prodded a few times by certain experts of the day, but no one could quite figure out what “it” was. As the years went on, the feeling of being different stayed with me the whole time.

As much as I wanted to be a part of the world of “normal” people I saw every day, something kept me from connecting — something deep inside. It was something everyone else was picking up on, except me. I felt almost like I was from another planet — a martian.

So when it was first suggested to me by a therapist that I had Asperger’s syndrome, it made me think. I had heard of the condition before, in college. I read about it in a psychology class. When I brought it up with a professor, she told me, “Oh, don’t worry. People who read that book think they have every condition listed in it.”thei

Asperger’s is basically a high-functioning form of autism. Those who have it, while being able to communicate, lack the natural social cues that neurotypicals (“normal” people) take for granted: facial expressions, body language and tone of voice. One in 88 children has been identified with an autism spectrum disorder, according to estimates from the Centers for Disease Control and Prevention. People who have it also tend to focus all of their attention on one thing at a time and can gather a lot of information mentally on whatever interests them. This is why some children with Asperger’s are referred to as “little professors.”

But years after that college class, when I was 28, still feeling out of place in the world and devastated by the sudden loss of my father a couple of years earlier, the diagnosis made even more sense than it had before. When a long test by a colleague confirmed the diagnosis, that’s when I finally started making sense to myself. I could finally put a name to what made me so different.

Some Aspies — what we like to call ourselves — receive special gifts with their condition. For instance, I have a great sense of sound and music. I can learn music fairly easily by ear and recite it at perfect pitch. Many things I see or hear in the world remind me of certain songs, or certain sounds.

Aspies can learn to function in a neurotypical society, but they have to be taught how to do so. They need to learn, intellectually, things that come to everyone else naturally, like interpersonal communication. In a sense, we learn to see the world as the neurotypicals may see it, while seeing it in our own special way at the same time.

I’m happy to say I’ve been making some great strides in the time since that diagnosis, but I have to say, the creation of the adults with Asperger’s syndrome support group in Ithaca in April 2011 is my greatest stride yet. Last September, we won the New and Innovative Service Award from the Tompkins County Mental Health Services Board.

The group assembles every month, and we let a conversation naturally develop and make sure each member has a chance to speak up. Some may only want to listen for a time, while others have fascinating and diverse minds, so evenings are anything but dull.

As Aspies, the best thing we can do is be there for each other, and listen. The best gifts we give to each other are our ideas and our perspectives on life because they help us all understand ourselves and the world a lot better.

Now with this group, I’m meeting more and more people like me, and I feel like we’re all making a difference in each others’ lives. With the formation of this group, I feel that I, and all the other Aspies in this community, finally have something we’ve been searching for all this time: a circle of friends — true friends.

The Adults with Asperger’s Syndrome Support Group meets at 7 p.m. on the third Thursday of every month in the basement of St. Luke Lutheran Church at 109 Oak Ave. in Ithaca.

Douglas Booth is the creator of the Adults with Asperger’s support group. He can be reached at movieguy@twcny.rr.com.