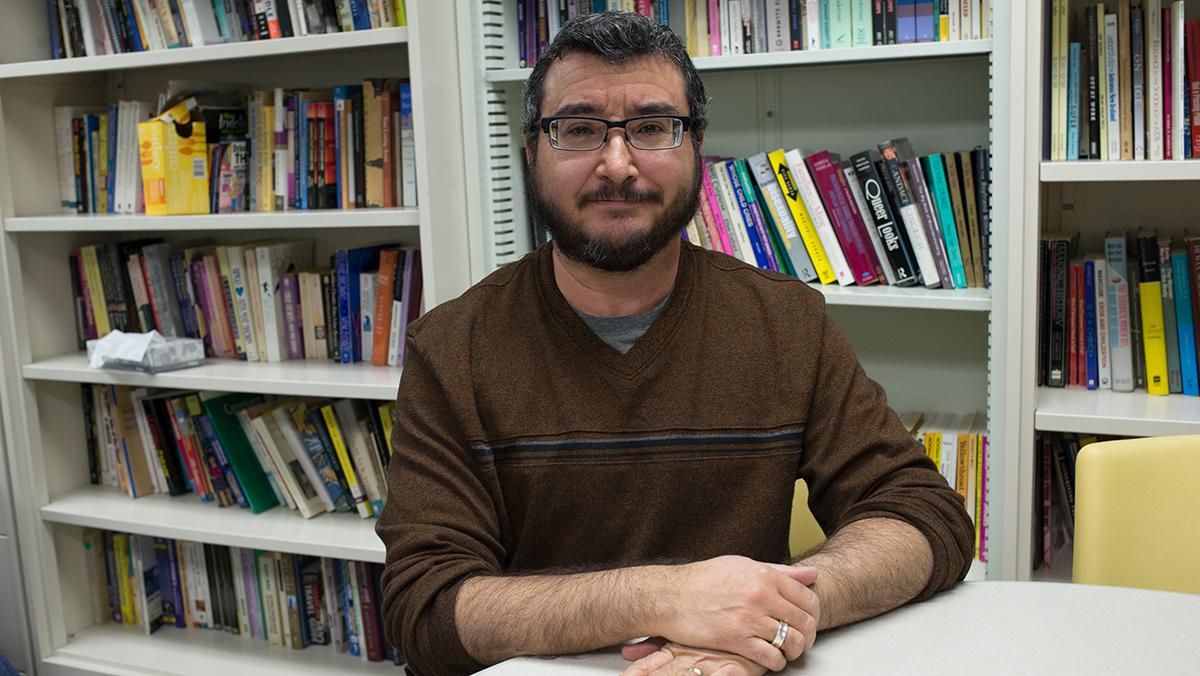 Fernando Ferraz/The Ithacan
Luca Maurer, program director of the Center for LGBT Education, Outreach and Services, discusses the negative impact of policies that direct which bathrooms transgender people can use.
By Luca Maurer
Published: February 22, 2017

Back when I started my LGBTQ work, little did I know I’d end up spending so much time talking about bathrooms.

Even just a couple of years ago, while working with my co-author on our book The Teaching Transgender Toolkit, we talked about whether it might be helpful for us to include a section on restroom access. Ultimately we wrote that section, which was fortunate because only a few months after the book was published, we were shocked by the passage of HB2 in North Carolina — legislation requiring that in all public buildings transgender people must use the restroom that corresponds to the gender marker on their birth certificate, not the one congruent with their gender identity. Public restrooms include those in public K–12 schools, state colleges and universities, parks and historic sites, some hospitals and airports, libraries, state and county courthouses and offices buildings, and more. We decided with our publisher that we needed to release the section free online, immediately.

Most people in the US take the availability of restrooms for granted. But for transgender people, using a restroom is a major safety concern and a daily struggle. In a short period of time, this has become a topic not just among transgender people and their families and friends but in political, legislative, and public policy realms. Today, there are many efforts at local and state levels to restrict access to public restrooms by transgender people.

Transgender people’s experiences, bodies, and existence are frequently denied, scrutinized, subject to intrusive questioning and examination, and policed. A newly resurrected front on this battleground is the public restroom.

During other periods of American history, the focus of who is granted full humanity, who is deemed worthy of dignity and respect, has rested squarely on allowing or denying access to public facilities. History contains other examples of public restrooms as a focus of oppression and legislation against marginalized groups. Segregation, discussions to move forward the ERA and the Americans with Disabilities Act, attempts to curtail people living with HIV from society — all have been times when laws carved out access for some to have the right to use public facilities, while others did not.

Make no mistake. Contemporary efforts to restrict restroom access are attempts to relegate transgender people from public life. Such laws and policies effectively say “If you are transgender, you cannot go to school. You cannot go to work. You cannot go about your business, or errands, or everyday life. You cannot take care of your family, or contribute to your community. You do not have the right to exist.”

Entering into this fray next month is a teenager named Gavin Grimm, and the US Supreme Court. Gavin, a transgender boy in Virginia, used the boys’ restroom in his high school for almost two months without incident, with his principal’s knowledge and support. But after some in his town complained, the school board forbid him from using the boys’ restroom, and required transgender students use separate facilities from other students. Gavin sued the school board in Virginia, and then appealed to the US Fourth Circuit Court. Now the Supreme Court takes on the case.

Gavin has spent his last two years in high school with no bathroom to use. Gavin has been barred from using the restrooms all other students use. He is required by school policy, solely because he is transgender, to use only the nurse’s restroom. Gavin refuses to do this. He says it is humiliating and exclusionary to be required to use a separate bathroom from all other students. He also says it is nowhere near his classes. So Gavin has spent the last two years in high school without using the restroom. His case will be heard before the US Supreme Court on March 28. The case will decide not just whether Gavin is allowed to use the restroom in his school, but whether all schools must treat transgender students consistent with their gender identity. He will graduate before the Supreme Court issues its decision, but presses on because he wants other transgender students throughout the country to have the right to be treated respectfully. The case focuses on transgender students — but could have far–reaching effects that extend to whether transgender people will be able to be a part of public life.

Gavin deserves an education that includes the right to use the restroom. For more information and resources, contact the LGBT Center; or show your support with #StandWithGavin.