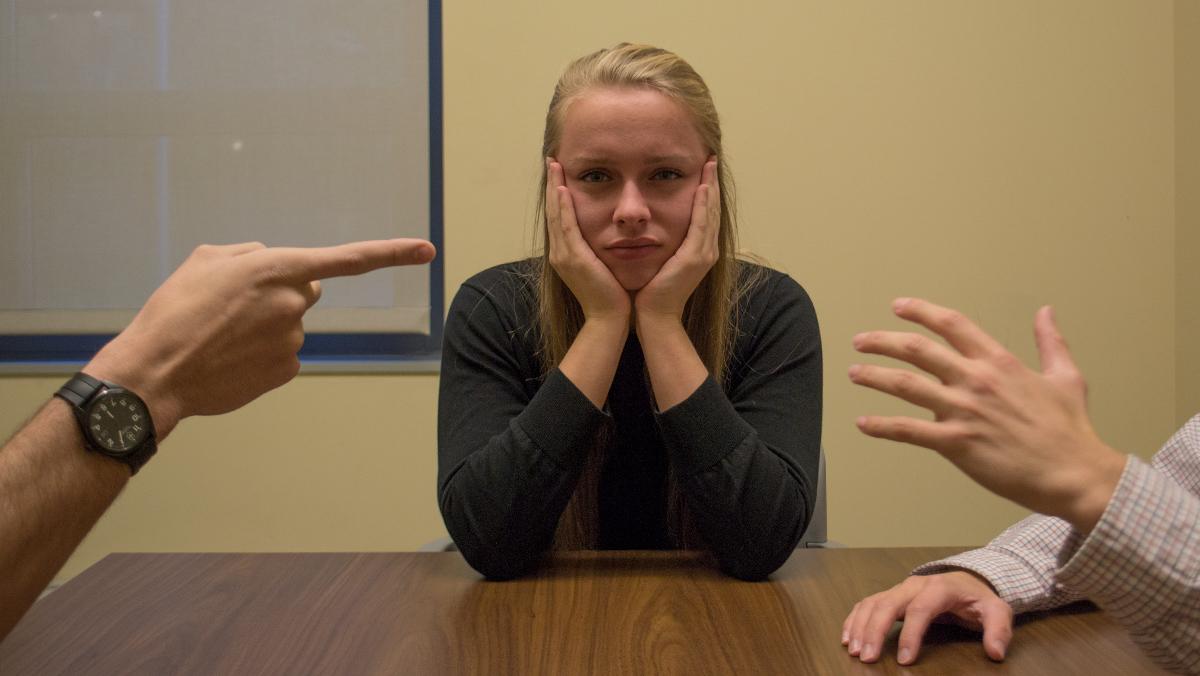 Photo Illustration by Eve Mahaney
The author writes that the domination of men in class discussions can have the impact of silencing other women.
By Hannah Gignoux
Published: October 26, 2016

“Wow, you talk a lot.” “You could be a lawyer; no one would ever get a word in edgewise.” “You’d be much more attractive if you were quieter.” These are all things I constantly heard growing up as an engaged and communicative individual, yet never heard applied to my male counterparts. I have always been told to watch how much I say and how loudly I say it, and for most of my life, I never questioned this critique. In high school, I would try not to raise my hand for every question asked, not because I didn’t know the answer, but because I didn’t want to come across as abrasive and obnoxious. This hesitation did not come from internal mindfulness, but from continued degradation of my enthusiasm. The older I got, the more I heard these limiting critiques, and the more I found myself biting my tongue in class.

I love debating and conversing intelligently with my peers: as a politics and English major it’s what I do. Discussion is at least 70 percent of every class that I take, and completely necessary to succeed, yet looking around any classroom there is always that group of students who never speak. I originally believed that if a student didn’t speak in the class, it had to mean that either they didn’t understand the material, they didn’t do the homework or they were lazy. I never thought much of these people that sat silently in the back of the classroom. These students contribute nothing to the class discussion: or so I thought.

It wasn’t until this year that I came to the realization that silence doesn’t usually relate to apathy. While in a very small upper-level politics class, evenly split between women and men, I finally saw the source of this silence. In the first class, two white men set the tone. No one has ever succeeded in shutting me up, yet two hours later I realized I was at a complete loss for words. The male students interrupted everyone. At one point in the class, they monopolized the conversation for up to 10 minutes, contributing nothing but the sound of their own voice and huge amounts of bullshit. My initial reaction leaving the room was anger and resentment: How dare these two men put me in a place of speechlessness. My second reaction was to use this new revelation to observe. Within the class, it was very clear that the women (me being the exception) were much quieter than the men. This was in no way from a lack of knowledge, as one of the female students in the class happens to be one of my close friends. We frequently do our readings together and I know that she is just as, if not more, competent than the men across the table.

Why do they choose to stay quiet? Well, most of the time, they don’t choose it. As a woman, it is much more difficult to validate yourself in class discussion than as a man. Of course this isn’t a “one-size-fits-all” kind of inequality. There are some men that have trouble interjecting in conversation, just as there are female students like me that add to the monopolization. However, the authority that allowed these men to silence everyone but themselves directly stems from their privilege within the classroom. Both of them are completely unaware of their actions. These men were never told to shut up. They were never told that they talked too much. They were never fed a negative narrative about their volume or their dominance, because they are taught that dominance is just part of their nature. The reality is that dominance or submission is learned, not natural. Maybe if society encouraged women and girls to use their voice and men to listen more carefully, classrooms would become louder, more productive, and inclusive.