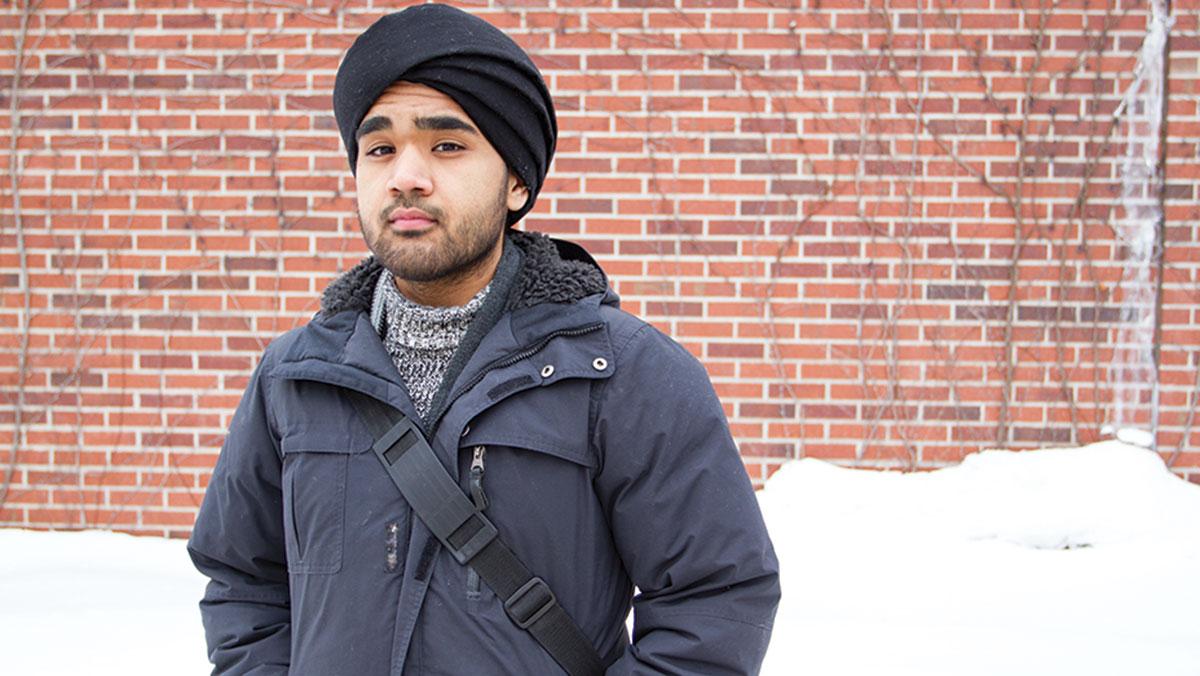 Tucker Mitchell/The Ithacan
Taranjit Bhatti is a sophomore exploratory major at Ithaca College from Elmhurst, New York. He is a resident assistant as well as the advertising and media chair for the South Asian Student Society.
By Taranjit Bhatti
Published: February 25, 2015

On Feb. 9, the Office of Institutional Research released the results of the 2012 campus-climate survey. Unsurprisingly, what it uncovered was a vast disparity within the experiences of various identity groups and a clear need for Ithaca College to promote cross-cultural dialogue and a shift in its diversity agenda.

The Ithacan reported on the results, and actually quoted President Tom Rochon from an email in which he stated the importance of the survey is “easy to over-hype.” But are the uncomfortable lived experiences of the individuals belonging to these various identity groups also “easy to over-hype”? Rochon’s statement and the conclusions reached in the survey reveal fissures within dialogues of inclusivity on this campus. To take a step forward toward a diverse and inclusive campus, we need to take a step back and analyze the very real implications of having such a “microaggressive” campus climate.

Microaggressions can be defined as the everyday verbal, nonverbal, and environmental slights, snubs or insults — either intentional or unintentional —  which communicate hostile, derogatory, or negative messages to target individuals based solely upon their group membership. Microaggressions pave the way to hostile environments which desensitize us to certain groups or individuals and render them less than human. When you create an atmosphere where an individual or group is perceived as less human, it systematically perpetuates the infliction of violence against them and creates a culture of silence that condones these conditions.

Classrooms on this campus are often the site of structural and epistemic violence. Nearly a week before the campus-climate survey results were publicized, a professor began my class by stating, “I don’t care for political correctness.” He then proceeded to discuss the naming of the NFL team the Washington Redskins. He said people should not be concerned about “some” nickname of a sports team but instead focus on other “bigger” issues. These statements were met with smiles and chuckles from the majority of the students in the class.

Unbeknownst to them, the issue that he claimed as so trivial has been a site of struggle since at least 1971 for many activist groups. His blatant disregard of the issues completely desensitized the class to the historical and present atrocities that Native Americans have faced. In that moment, the institutional violence committed against indigenous peoples was legitimized.

This is not just some single isolated issue. Women are constantly objectified and sexualized through media such as IC Crushes. There are rampant issues of folks using the wrong pronouns to address students and other members of the community. The words “gay” and “faggot” are constantly used and are testaments to the production of linguistic violence here on campus. As a Sikh-American, whenever I wear a turban to represent my religious identity I am met with uncomfortable stares and even snickering. What these derogatory and negative messages do is instill a sense of isolation or alienation and expose notions of power and privilege.

Let me be clear: Addressing microaggressions and other issues of diversity is an academic issue. It is within these walls of college and university institutions that learning and unlearning happens, and therefore the inhibition and eradication of microaggressions rightfully begins here on campus. If they are unaddressed on this campus, this ethos is carried out into the “real world,” and further contributes to this commonplace “american psyche” of an “Us vs. Them” mentality. In order to address the greater inequalities in our social milieu, we need to begin by cultivating a community here on campus that teaches its members about the largely undiscussed historical, institutional and social narratives that are responsible for these divides.

Taranjit Singh is a sophomore exploratory major. Email him at tbhatti1@ithaca.edu.