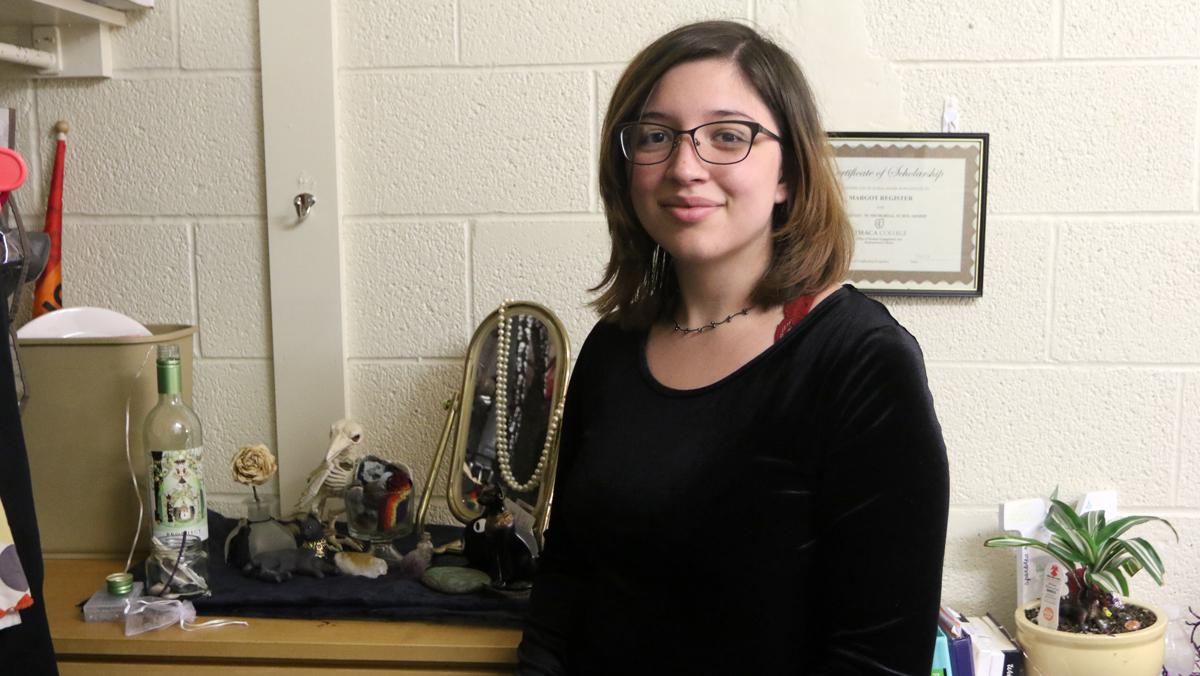 Maxine Hansford/The Ithacan
Margot Register, senior cinema and photography major and co-president of the IC Pagan Community, writes that the community focuses on being a place to respectfully and authentically explore paganism.
By Margot Register
Published: October 2, 2018

A poster reading “Ask A Witch” has become a common sight on Ithaca College’s campus. As the contact listed, strangers ask me about it. It’s always a fun event, but there’s a sincere reason we host it every year. Many misconceptions of paganism arise from portrayals of it in the media. Negative and false stereotypes about our practices (like goat sacrifices or glittery magic) inform many people’s thoughts about paganism. These could stand to be cleared up, and a lot of curious students benefit from a non-judgmental way to ask. It was through this event that I was approached about writing a commentary for The Ithacan.

The IC Pagan Community is a religious group on campus. I’m the co-president of the organization, and I love it with all my heart. We’re a broad community for any earth-based faith or traditional practices. Paganism has become hip recently, many people think it’s “fun or “rebellious.” Which is great! I fully support religious exploration. But, either because of this or in spite of it, we struggle to be considered a legitimate religious group. Words like “pagan” and “witch” are still seen as scary, and that makes folks hesitant to reach out if they’re curious about paganism.

Paganism’s wide breadth means that there are plenty of problems within it that need to be addressed, but these types of incidents tend to put people on the defense. And when people feel defensive, it’s nearly impossible to address issues within paganism; like the tendency of cultural appropriation, the relationship between colonialism and neo-paganism, and the INSANE issue of fascist and neo-Nazi groups wrongly using pagan imagery and culture to excuse and justify their beliefs.

There are numerous reasons people come to our community. In our weekly meetings, we have people who grew up in a faith they no longer ascribe to, agnostic folks who are interested in spirituality, people who are a part of a non-pagan faith community but consider themselves to practice magic or witchcraft, folks who were raised pagan, people who aren’t pagan but enjoy the community and so on.

As an organization, IC Pagan Community has a few different priorities — no one is forcing you to convert. We promote asking questions about our own faith and one another’s. Because there are so many different ways to practice paganism, appreciating religious differences is integral to a cohesive pagan community. Asking questions is the easiest way to start a path of self-discovery on how you perceive and interact with your religion and spirituality.

Reclamation is important, too. Words like “pagan” and “witch” have traditionally been used to ‘other’ and oppress traditions, religions and people. Here, we celebrate them. We want to be proud of traditions that were lost and new ways of understanding the world that aren’t as common. There’s power in a word. Building a community within that word gives us strength. And in that lies our first priority.

The founders of IC Pagans Community wanted a community where they could exist together, learn from one another, but also know that they are not alone. Folks who are a part of IC Pagans Community know that they have a community. Even if they can’t come to meetings, they know there’s a network of people they can reach out to — religiously or personally — and that they can get support. Community is an integral part of religion. Just because we all practice differently or privately doesn’t mean we don’t deserve one.

Here’s the deal, if you have a question, ask us. Not everyone wants to answer questions about their religion, but we have a Facebook page and an e-board that is open to answering them. Also, recognize the importance of religion, all religion, in people’s lives and the healing process that comes from finding a faith community again. Respect religious differences, appreciate them as something beautiful that should be celebrated.