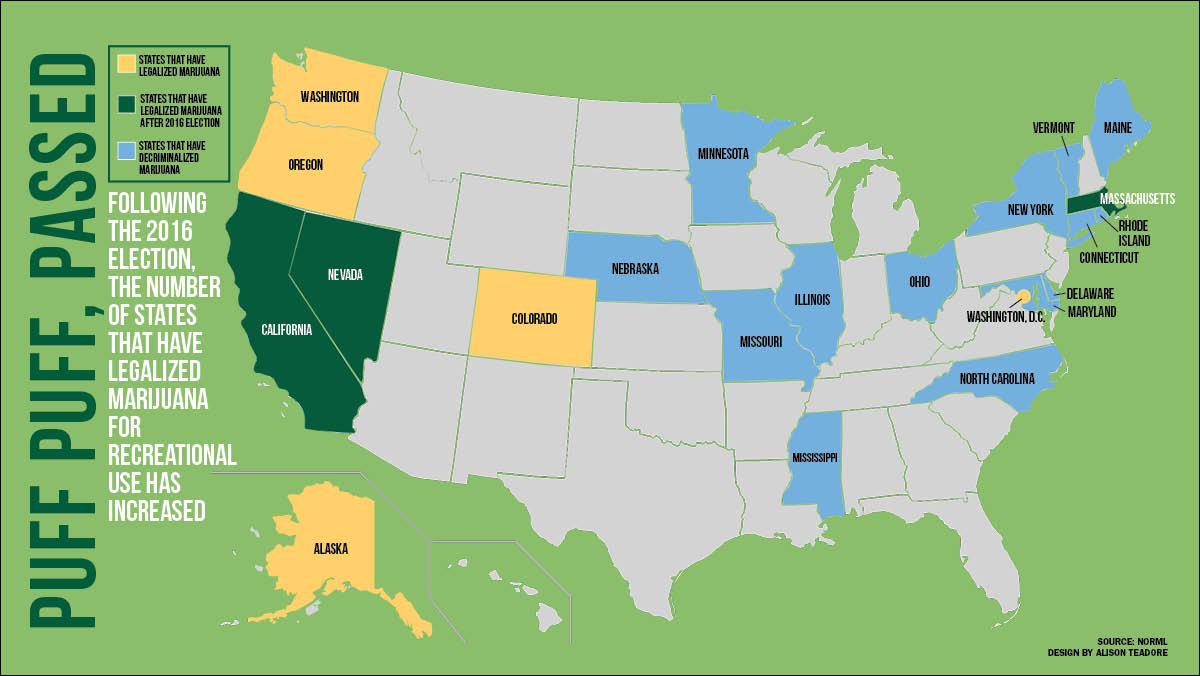 In recent years, marijuana has become far less taboo in American society. Colorado, Washington, Oregon, Alaska and Washington D.C. have legislation making it legal to tax, sell and use marijuana recreationally, and more than half the states have medical marijuana programs that are incredibly successful. On Nov. 8, nine states voted on marijuana reform laws. California, Massachusetts, Nevada and Maine passed recreational marijuana legislation and Montana, North Dakota, Florida and Arkansas passed medical marijuana legislation. The states that legalized the recreational use of marijuana have seen millions of tax dollars from marijuana sales. Colorado alone enjoyed a revenue of $70 million during a single fiscal year. Federal legalization of recreational marijuana is a far reach, but it is important that states and communities keep making efforts to decriminalize marijuana.

Decriminalization is not the same as legalization. Decriminalization laws make it so possessing small amounts of marijuana is a civil crime with a small fine, compared to a criminal offense with possible jail time. In 2014, nearly 1.3 million people were arrested for drug possession and nearly half were arrested for possessing marijuana, according to the U.S. Department of Justice. The Federation of American Scientists’ Drug Policy Analysis Bulletin reports that it costs taxpayers approximately $1.2 billion annually to have these people behind bars.

A large number of the perceived “risks” associated with marijuana use are false and in most cases, the prohibition of marijuana is more problematic than using the drug. Research proves that marijuana is not a “gateway drug,” and data from the U.S. Department of Health and Human Services suggests that the large majority of people that reported having tried marijuana are not frequent users and have not gone on to use harder drugs. Laws prohibiting the use of marijuana do not change marijuana consumption, nor do decriminalization laws, according to a study by the University of Michigan and the California State Office of Narcotics and Drug Abuse.

Recently, the Drug Enforcement Agency had an opportunity to reschedule marijuana, meaning marijuana would no longer be placed in the same category as heroin, in the eyes of the federal government. If marijuana were to have been rescheduled, it would be placed in the same category as certain prescription drugs, such as Adderall. However, the DEA failed to do so and claimed that more research on the medical use of marijuana needs to be conducted.

Ithaca College’s policy on marijuana possession is progressive and sensible when compared to other colleges. The college’s policy on marijuana possession is equal to its policy of underage alcohol possession. The first possession offense warrants a meeting with a Hearing Officer, a written warning and a mandatory online educational program with a $50 fee. It is not until the fourth possession offense that a student can be suspended from the school. Students at Cornell University are not protected by a school policy for simple possession, rather they are subject to the state legislation regarding possession, which could land them in jail or with a $500 fine.

In 2014, Philadelphia enacted legislation that decriminalized possessing up to 30 grams of marijuana. The punishment for possessing less than 30 grams is $25 fine, and the punishment for smoking in public is a $100 fine. This policy protects nonviolent citizens from jail time over a petty offense and frees up police officers to focus on more serious crimes.

Decriminalization legislation like in the the city of Philadelphia, and progressive drug policies like Ithaca College’s, are an important step forward for marijuana and the protection of its users. Decriminalization laws save taxpayers millions of dollars and save nonviolent people from having their lives ruined over a petty drug offense.

In order to support the decriminalization movement, you can write a letter to your senator or contact your state’s legislators. The National Organization for the Reform of Marijuana Laws (NORML) is a great resource to stay up-to-date on marijuana policy and the reformation movement.