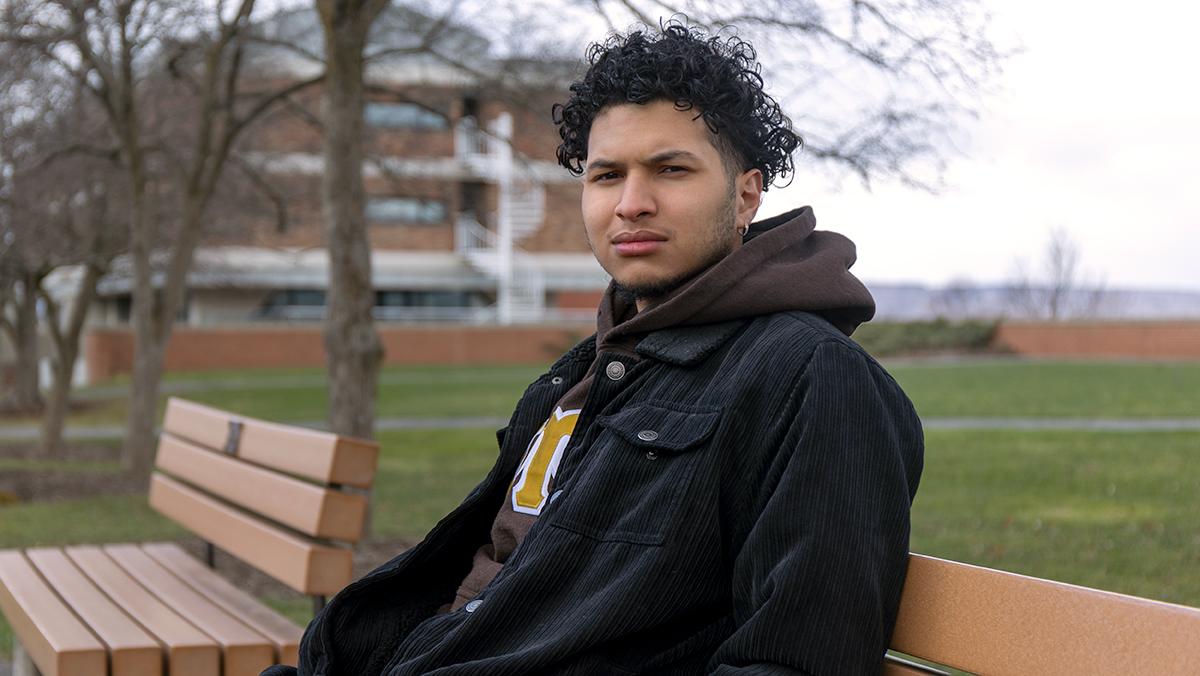 Ash Bailot/The Ithacan
Junior Sebastian Santiago discusses why he feels disconnected from students at a predominantly white institution and what he has done to find a community of color. By getting involved with multicultural Greek life he has been able to express his way of life sincerely without assimilating into the typical white-American culture.
By Sebastian Santiago
Published: March 31, 2022

Walking around campus during my first year at Ithaca College, I felt reclusive and immediately assimilated into what seemed to be a different culture. I’ve been in academic settings all my life, even private institutions, but why was this experience so different? I noticed I was walking to places a lot faster than other people, but still arriving at class late because I was running late from another obligation or I just felt no motivation to be the best student I could be today. We can consider both ways as terrible spirits to start your day with.

However, it seemed like it was just me. Only I felt disconnected from the student body because I didn’t talk a certain way, received regular doses of sympathy — not empathy — and was questioned about how I did things. This was an unfamiliar experience considering that every school I went to before college was majority Black and Latino.

As a Puerto Rican, first-generation student from Newark, New Jersey, I had a minimal understanding of what an advanced academic setting would look like, especially in a predominately white institution. As this is my experience, I am positive there is a small population in most colleges or universities that feel this way.

In an environment that required an abundance of structure, focus and determination, I struggled to find a purpose for these. Being lost in a thousand different paths to pursue during my life felt like I was running out of time to make the most of this opportunity. I yearned for more of an identity that represented me in my career and my personal life. Instead, a facade is necessary for success in American education. I believed this to be true until I was introduced to multicultural Greek life in Ithaca.

Of course, I joined clubs to find the communities I felt more engaged with, but these connections were only temporary and for the time being. The clubs I was in like PODER and First Generation met weekly and were about an hour long. Within this hour, spoken are the promising words of a future for underrepresented communities. In these spaces, we uplift each other to a degree where we can only flourish with the inspiration of all our dreams and goals that make us feel invincible. This is all we have because once we walk out of the comforting space of each other, we step into a predominately white world that diminishes much of the progress made.

Searching for something deeper and more permanent, I stumbled upon La Unidad Latina, Lambda Upsilon Lambda Fraternity, Inc. I felt like Greek life was nonsense, a waste of time, and a distraction from my purpose here. I felt this way being that my only introduction to Greek life was white organizations, with whom I had no relatable background with its members.

It wasn’t until I met the hermanos of this Latino fraternity, that I was opened up to a new perspective and experience of a permanent brotherhood away from home. It is easy to provide someone with a space to transform and feel like they can fit in. However, how often have you been presented with a space where you are welcomed as yourself, and instead learn what you’re capable of naturally, rather than leave yourself behind? The goal of multicultural Greek life is aimed toward supporting and giving underrepresented populations the power to express their lens of life genuinely and sincerely without assimilating into the typical white-American culture.

Joining La Unidad Latina, Lambda Upsilon Lambda Fraternity Inc. at Cornell University has equipped me with skills that have led me to embrace my identity within a predominantly white academic environment rather than comparing myself to the rest of my peers. It has shed new light on the potential for me to gain a better college experience. Being a part of a small community that remains true to themselves no matter the circumstances and proving to be just as capable as the rest of the students at Ithaca College was inspirational to me. I adapted to create the ideal space for me to excel in a way I knew would differ from others, and it was the fact that I was okay with it that made me realize Greek life can have a huge impact on college campuses.

Not only can it affect the whole campus, but it uplifts the underrepresented populations in ways that Ithaca College’s administration cannot. Being that the college does not recognize social or service fraternities or sororities on campus, you may not be aware of this opportunity to join unless a multicultural organization risks its presence on campus to share its existence. Professional fraternities and sororities being allowed on campus may be of benefit towards a specific career path as they offer many connections within a particular field. However, multicultural Greek life can connect many people with leaders of their community that have achieved what they yearn for and come from the same background as them. These types of relationships can be more impactful and powerful in promoting longevity in our youth’s success. Regardless of whether you are a member of a multicultural Greek organization or not, their existence alone has a tremendous impact on the quality of life for oppressed populations on our campus. They provide a sense of identity security, access to higher education and a sense of home.