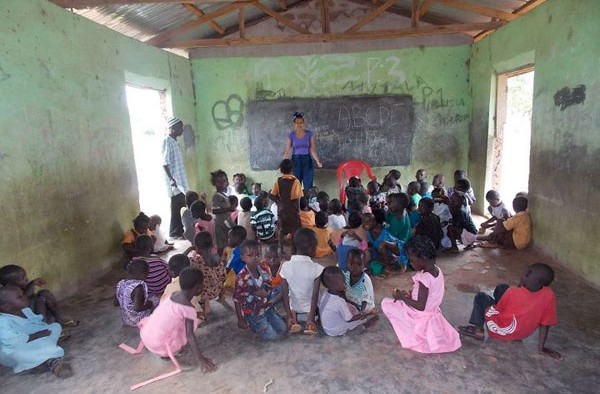 If asked, my friends would say I’m likely to carry around a blank white protest sign, just in case I happen to come upon something to scream about.

So, when I was given the opportunity to spend the summer in Northern Ghana as a member of Operation Crossroads Africa, a nonprofit precursor to the Peace Corps, I jumped at the chance. I arrived at the program’s orientation ready to make a difference. But before my group of 10 Americans was sent to one of Ghana’s poorest communities, Larabanga, our project organizer, gave us his favorite bit of advice: “Don’t go to save Africa, go to let Africa save you.”

Armed with a small personal pharmacy and a bundle of bug spray, I set out across the Atlantic to teach — still ready to break out that protest sign if I found something to chant for or someone to chant with. But there, in a makeshift open-door school with dirt floors that turned to mud every time it rained, I learned there are some things we can’t change, no matter how much we scream.

Regardless of how frustrated I was about the poverty in my village, most of my third- and fourth-grade students still didn’t have pencils for school or shoes to wear while they carry buckets of water from the community well to their overcrowded homes. Regardless of how upset I became at my students’ inability to focus in class, many of the schoolrooms still didn’t have desks, and none of them had more supplies than a painted-on chalkboard at the front. Regardless of how much I wanted to help this community, my efforts were little more than a small drop in an empty bucket. I certainly wasn’t going to change Africa, and Africa was surely taking a toll on me. My project leader was right — in a way.

We can’t fix centuries of failed societal organization, colonialism and abject poverty in a few summers of volunteering, or through Facebook posts about equality. We can’t simply undo the mental impact that seeing the historic slave castles on the country’s shores has on a developing community. We can’t extend a few handshakes and erase the racial structures that caused one of my students to tell his American teacher that being black was bad because “Abrunis blood,” he said, using the Ghanaian term for white people, “is better than my blood.” However, we can begin that change if we work together.

The most successful experiences on my trip were when Americans worked hand-in-hand with Ghanaians. We hired craftsmen from neighboring villages to help us build desks and put cement floors in the school. We not only made school a bit better for the students, but we also had the chance to understand each other in a way typical tourism simply won’t allow. We met with the school’s headmaster and discussed where to place our students so they would learn better, and why beating the special-needs student when he got angry at the room full of 125 kindergarteners wasn’t okay.

Change can happen in Ghana, but first it must happen for its visitors. Volunteers can make an impact if they stop trying to “save” a nation they feel is hindered by tribal boundaries or old customs that seem out of place in the 24/7, ever-connected Western world of online news, and begin looking for ways to connect on a basic human level.

This summer, the members of Operation Crossroads Africa got to know the local people without any need to argue about politics, religion, race or any other unsubstantial social construct that works to divide the citizens of the world. We didn’t need to shout about which political party could build a floor more quickly; we just built it — together.

Shea O’Meara is a senior journalism major. Email her at someara1@ithaca.edu.