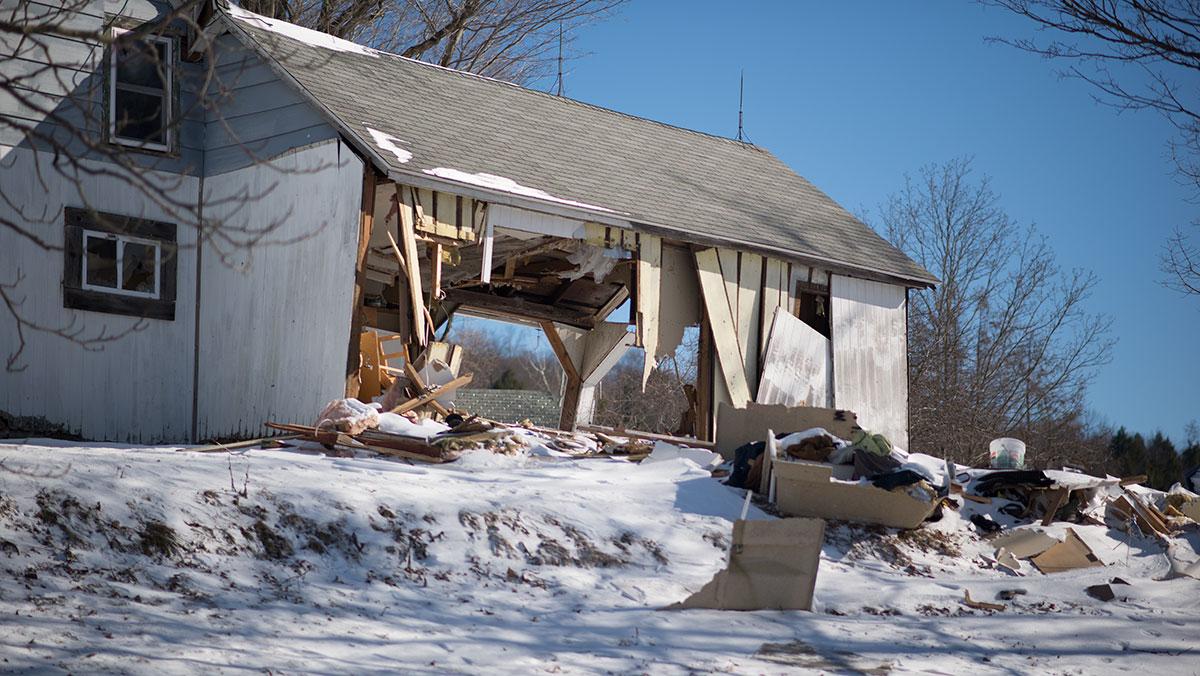 On Hornbrook Road in the town of Danby, just a 10-minute drive from our campus, stands the remnants of the Cady household after a 60-hour standoff between David Cady and the local police, which began Dec. 31, 2014, and ended Jan. 2 with Cady’s tragic suicide. Police had first arrived to issue a DUI warrant to Cady, when Cady’s wife, Melissa, told them he was armed and suicidal. Once Melissa and their two children were evacuated, the Cady house was destroyed from the interior by tear gas grenades. Police penetration escalated Jan. 1 with the use of The Rook, an armored tractor designed for use against barricaded subjects in hostage situations. Though a single gunshot from inside the home was heard the previous night, after which Cady could no longer be contacted, the police proceeded to tear down his home. This hyper-reactive decision was committed in spite of evidence pointing to its worthlessness, a choice that police officials made not based on the reality of the situation but by their own aggressive attitude.

These details of the police’s highly questionable actions demonstrate the disparity between police action and public consent, between official protocol and the situation’s sensitivity. In an era of unprecedented police presence, humanity and empathy are shelved to prioritize detainment and control. Before drawing their weapons, authorities are principally armed with state approval and encouragement of physical force, and it is this sanction of violence that fundamentally allows such an unjust incident to occur.

“My husband needed help,” Cady’s widow, Melissa, said in her account at the Tompkins County Public Safety Committee meeting on Jan. 12. “All they did is bring in more and more and more police.”

What is evident from the actions and testimonies of the police is an unyielding perception of Cady as purely an enemy and instrument of terror. He was certainly in a dangerous position, but the fact that key characteristics of him were deemed unimportant to the situation, that he was first and foremost suicidal, and that secondly he had remained gentle to his family, begs further questioning of the police. During the standoff, Cady initially conceded to talks and promised to walk out if accompanied by his wife, but police were not willing to negotiate and passed on this potential opportunity to end the intense situation. What is most disturbing of all, however, is that the police have defended all of their actions, particularly Sheriff Ken Lansing.

“It’s a shame what happened with him, but no one else got hurt,” he said. “I’m happy with that. We had to do what we did. I had no control over his decision to take his own life.”

How can responsible policing be exemplified by a situation that ended in a man’s suicide? Tompkins County Public Safety must be scrutinized, and many calls for an independent investigation are already being heard. If the police claim that policy and protocol had been appropriately followed, then it is the entire local police system that should be questioned. We must support our neighbors and hold our police forces accountable, for true community safety has always rested on empathy and compassion, never on excessive policing.

Bud Gankhuyag ’14 is a teacher aide living in downtown Ithaca. Email him at bgankhu1@ithaca.edu.