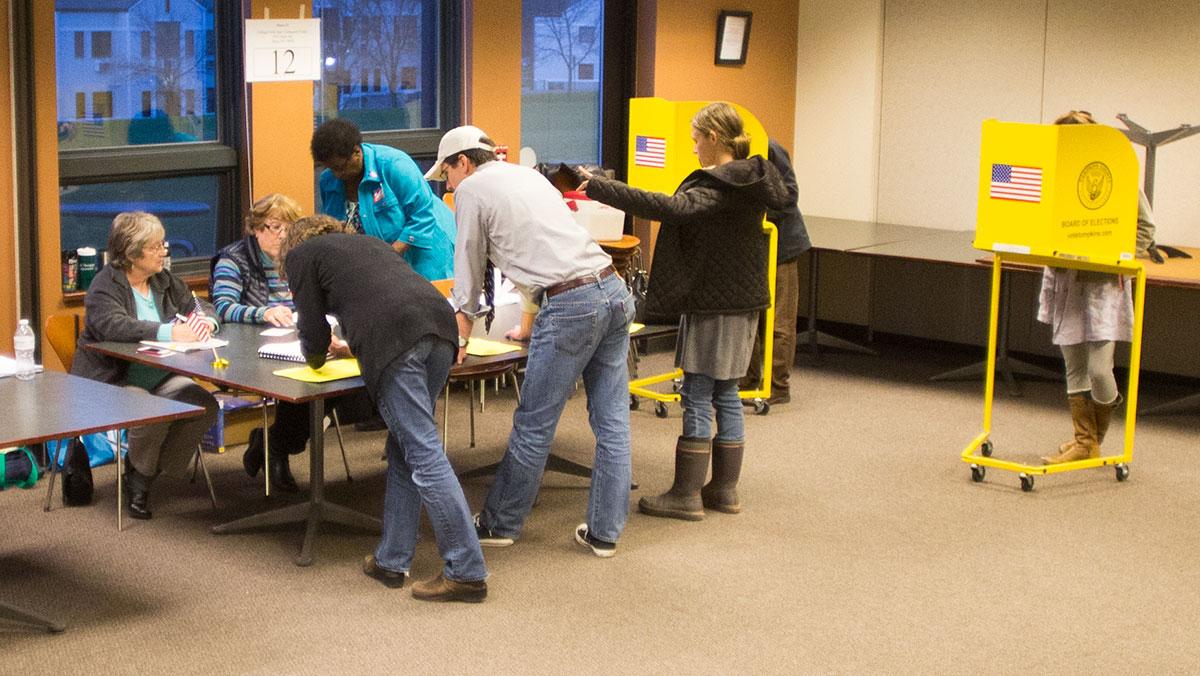 Editor’s note: In light of the Nov. 4 midterm election, The Ithacan invited IC Democrats, IC Conservatives and IC Progressives — the three political organizations at Ithaca College — to share what they thought were the most important issues regarding students today.

In just a few weeks, the grace period for student loans for the Class of 2014 will run out, requiring graduates to begin monthly payments. This past June, Republicans blocked a bill proposed by Sen. Elizabeth Warren, D-Massachusetts, which would allow students to refinance their loans at much lower rates. The cost of this refinancing would be over $51 billion, which would then be passed on to high-income tax brackets. This raises a question: Why exactly didn’t this bill pass?

In the United States, the current amount of student loan debt is $1.2 trillion. If the solution to lowering this number were as simple as lowering interest rates, then it would have happened years ago. Unfortunately, the issue is more complex than that. Warren’s bill neither addressed the rapidly increasing cost of education, nor did anything to discourage excessive borrowing. The government’s involvement in backing private-loan agencies encourages haphazard lending to students who have absolutely no proof of future ability to pay off these massive loans.

At this point in time, the best course of action to reduce the student-debt crisis is by educating high school students about the future implications of taking on tens — even hundreds — of thousands of dollars in loans at high interest rates for the sake of attending their “dream school.” The long-term effects go beyond high monthly payments for many years. Having large amounts of debt at any age, especially for young adults, is detrimental when applying for any other kind of loan, such as car loans and mortgages. The student-debt crisis is at a level where it is negatively impacting other sectors, which has the potential to drive our economy into another recession.

Warren’s bill attempted to give a short-term solution to a long-term problem. Senators and representatives on both sides of the aisle agree that measures need to be taken to help millennials who are in over their heads with loan payments, but there is not going to be an easy way to achieve this. The bill did not address the staggering costs of education or the faulty system in which just about anyone can take on student loans of any amount.

The timing of Warren’s bill leaves little doubt that it was designed to pit political parties against one another to sway student votes before an election that Democrats have been worried about losing for months. The fiscal future of our country, as well as of our individual well-being, will not be improved by refinancing interest rates, and attempting to simplify and politicize an issue as complex as student debt will result in failure.

Stephanie O’Brien is a junior applied economics major and the treasurer of IC Conservatives. Email her at sobrien2@ithaca.edu.

The biggest issue specific to college students’ political activism is this: There is none. Political activism is essentially nonexistent. We are numbed by the ineffectiveness of our politicians, continually witnessing empty promises without corresponding action. College students have lost complete interest in contemporary politics, resulting in political unawareness.

Martha Robertson and Tom Reed were candidates competing for a congressional position in the Nov. 4 midterm election. I recently asked 79 random college students if they recognized these names. One hundred percent of the inquired students could not remotely identify the names. They were completely unaware of these politicians’ existence. Students could not identify political candidates running for a congressional spot in our supreme, democratic government. Upon explaining Robertson’s and Reed’s political roles, 100 percent of the inquired students showed little-to-no interest in learning more about the election.

How can our political system expect college students to get out and vote when students are not even aware of candidates’ existence? Of course, there are select few collegiate students that participate genuinely in government politics. However, a nation revolutionizes and evolves through massive citizen political awareness and participation. This grand decrease in political awareness — specifically among the millennials, who will inevitably lead this nation — exhibits how democracy has been failing, unveiling a deep political issue within our society.

The major cause of political unawareness is our president’s deceptive character.

Millennials and many citizens have lost faith in President Barack Obama, and according to a Gallup poll, Obama has a 54 percent disapproval rate. He promised to retract all troops from Afghanistan in 2014. That hasn’t happened. It can be intelligibly assumed that this claim will not occur as a real event. Obama recently conveyed in a public speech our need to decimate any terroristic influence, regardless of global location. It’s understandable when Obama changes his opinions based on circumstance, but when will he legitimately act? Obama must fulfill words with action. If he claims to remove our troops from war, the next step is to enact an actual removal. If he claims to be the force against terrorism, he must take immediate action against malevolent organizations. Evil-intentioned terrorists only understand violence. They do not respond to peace.

People will understand Obama if he takes aggressive force to the doorstep of an innately malicious terrorist organization. To regain the respect and faith of American citizens, Obama must act in direct accordance with his words, as should all politicians. Truth and straightforwardness among politicians would be an immensely powerful starting point to remedying the issue of political unawareness and disinterest.

The millennial generation has a profound drive to uphold truth and diminish deception.

President Obama, our exemplary politician, has a tendency to deceive by proposing false promises, embodied by the absence of action that directly correlates with his verbal proposition. This is the primary cause for the widespread loss of citizens’ political faith and awareness.

Jared Amory is a senior philosophy major and the director of literary correspondence of IC Democrats. Email him at jamory1@ithaca.edu.

The students of today will likely face a world of hurt as a result of the moderate and conservative governmental policies made today.

All citizens, including students, are continuously impacted by the effect of corporate money influencing our democracy. In the local congressional race, Democratic candidate Martha Robertson collected over $323,000, and Tom Reed, incumbent Republican congressman, collected over $1.8 million from corporations and political action committees. All Green Party candidates understand that this is an affront to democracy, and reflect progressive values by refusing to accept any campaign contributions from corporations or PACs, so that they can focus on representing the people rather than their corporate sponsors.

The longer big money is allowed to control campaigns and elections, and the longer the Democrats and Republicans refuse to give up accepting legalized bribes, the longer the people of America will not have a voice within their own government. The influence that big money has on our government has made fixing problems such as climate change almost impossible within our national legislature, and it is imperative that this problem be corrected in order that topics issues such as environmental damage can be discussed and corrected.

The one issue that will have the largest impact on the future of humanity is the environment, and our direct impact on the planet’s well-being. In the New York gubernatorial election, conservatives such as Republican candidate Rob Astorino have hailed hydraulic fracturing, also known as fracking, as a promising business of the future. Andrew Cuomo, incumbent Democratic governor, has refused to take a stance on the issue, despite the fact that fracking has been proven to contaminate public drinking water with arsenic and other toxic materials. Only Green Party candidate Howie Hawkins called for a complete ban on fracking.

Both the Democratic and Republican Party platforms state that they do not fully support becoming a society built on 100 percent renewable energy, while the Green and Socialist Parties do. This lack of focus on adopting carbon-neutral energy production will only lead to speeding up the process of climate change, which is projected by the United Nations to be the cause of world-wide freshwater shortages by 2040. It is clear that candidates in both major parties have repeatedly overlooked the well-being of the citizenry in favor of corporate profits, which progressives find abhorrent and criminal.

The progressives believe that the only way to create a future where humanity is able to continue to not only survive, but to thrive as individuals and as a global community, is to drastically reduce humanity’s carbon footprint as quickly as possible, which will not be possible without the removal of big, corporate money’s ability to impact the democratic process of the United States.

Josh Kelly is a sophomore politics major and the chairperson and founder of IC Progressives. Email him at jkelly6@ithaca.edu.