Commentary: Pressure to succeed during a pandemic made me sick 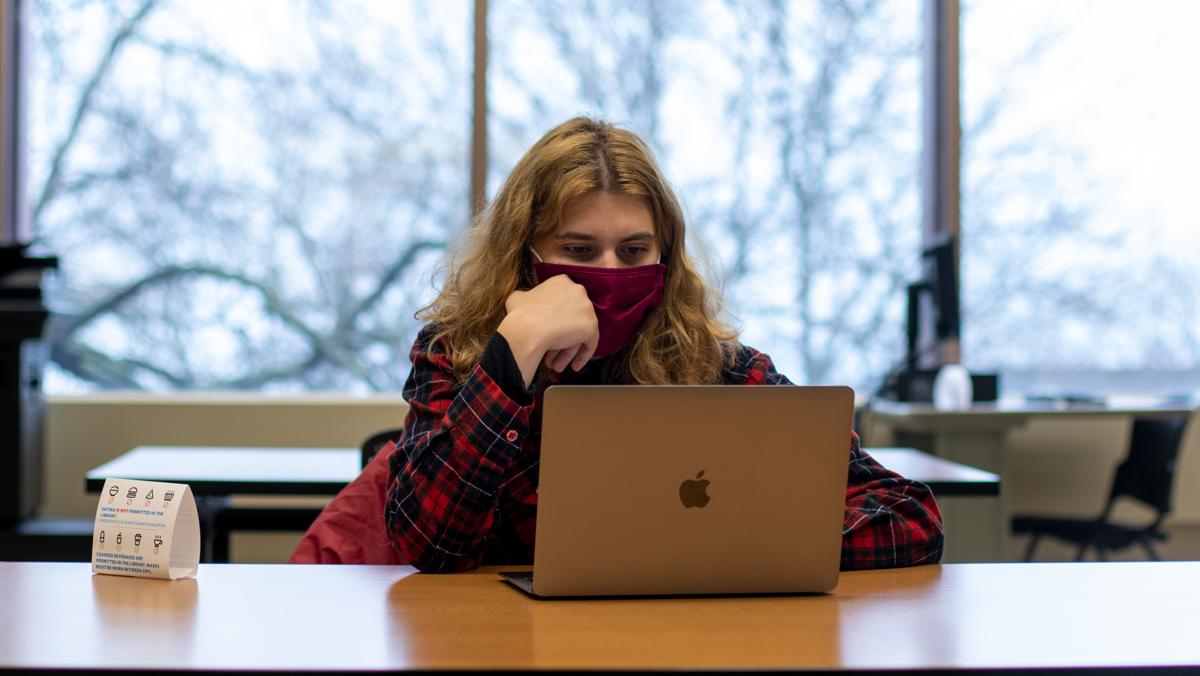 Bec Legato/The Ithacan
Senior Sarah Diggins writes about the health struggles she experienced during the pandemic and discusses how social media perpetuates feelings of inadequacy and pandemic burnout.
By Sarah Diggins
Published: April 28, 2021

Social media during a pandemic is nothing short of a perfect storm. The same way we would ask each other what we did over the summer, we prepared ourselves to ask each other, “What did you do this pandemic?” Except, in most cases, we don’t even have to ask.

Scroll on any college student’s Facebook feed and you’re practically reading a collective, never-ending resume. Young adults grabbed the pandemic by the horns and used this “unprecedented” time to succeed. They secured remote internships, made Dean’s List and ventured on countless creative endeavors.

I, on the other hand, was simply not as productive. While I was impressed by the ability to achieve under such circumstances, I couldn’t help but ask, “How has society evolved so that we associate any sort of downtime as a time where we feel we must be productive?” I was still constantly worried about contracting a mysterious virus! But at the same time, I so badly wanted to be achieving things, and to be candid, I so badly wanted to contribute to that never-ending resume.

I know, social media is a facade. But a tiny part of me thought, “Who cares if they aren’t perfect — they still have a better resume than me!”

I viewed my time at home during early quarantine as a break, and for a while, it was. I was able to get work done on a schedule that worked surprisingly well for me. But as soon as everyone found a groove and the expectation of high productivity during a difficult time began, things started to take a turn for the worse.

In mid-October, I began having nightly panic attacks. At the time, I had no idea where they were coming from, and I had never in my life been more convinced that I was dying. Eventually, it got to a point where I could barely eat. I was sent for an endoscopy on the morning of Election Day. From there, I was diagnosed with gastritis — a condition associated with inflammation of the stomach lining that can be caused or worsened by extreme stress and anxiety. People do not die of gastritis, yet I was terrified I would. This health anxiety only worsened when my gastroenterologist sent for a hepatobiliary iminodiacetic acid (HIDA) scan that told me my gallbladder was failing, and I’d need it removed shortly after New Years’. I was having health issues unlike I had ever had before, but my doctors had assured me that everything was under control. And yet, I couldn’t shake the consuming feelings of anxiety that I wasn’t doing enough and worries about my physical health.

I soon came to the conclusion that I was suddenly so irrationally worried about my health because I had begun to think that if something happened to me now, I would have died having accomplished nothing. Even just a few months later, I realize how unbelievably upsetting it is that I ever could have thought that. Besides the fact that I have actually achieved cool things, I was comparing my entire life to the unrealistic amount of “success” we expect ourselves to have by the age of 21.

I’m doing much better now, but it’s not something you can shake overnight. I recognize that my experience with burnout is not typical and was likely intensified by my existing mental health struggles. However, I do think we should analyze the factors at play that cause so many people to feel inadequate, as well as normalize openness about these feelings.

I certainly don’t blame the success of others for my struggles, but I do think it’s time we confront the ways we contribute to a culture of toxic productivity in classroom and work settings, as well as on social media.

It’s time we celebrate students and young professionals for more than just their professional and academic successes and recognize that there’s more to “self-care” than stress balls. It’s also reassurance, support and working to relinquish unhealthy competition on campus and in the workplace. If no one has told you this yet, let me be the first: you are so much more than your resume.