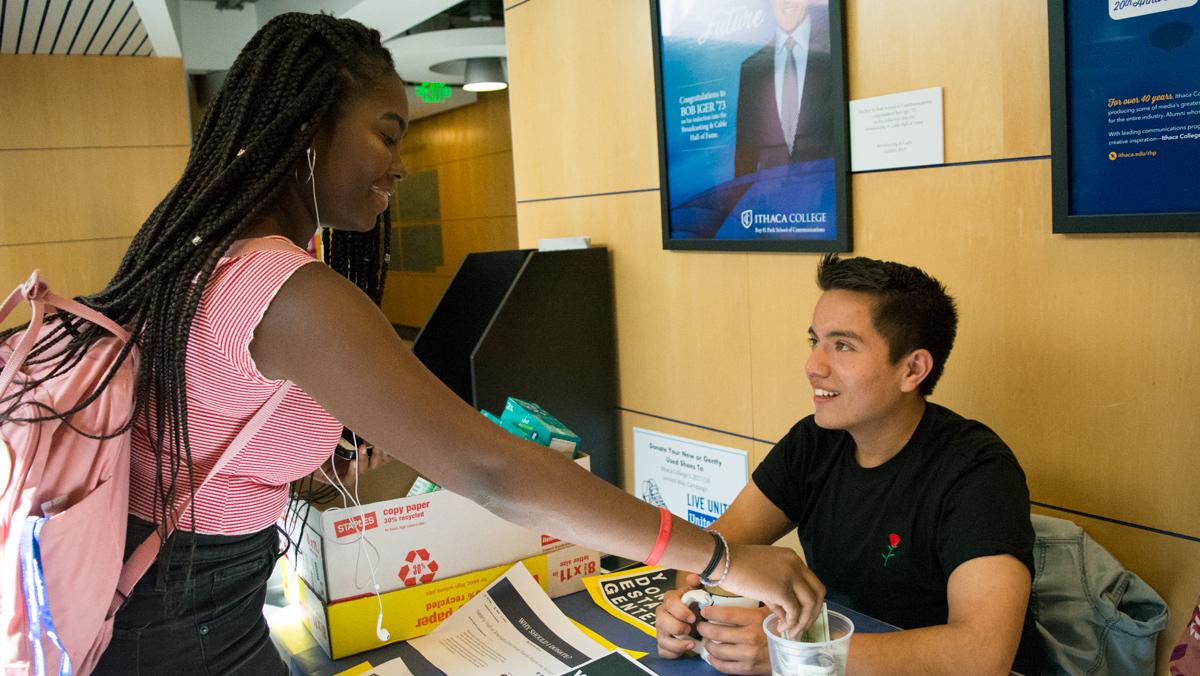 Ray Volkin/The Ithacan
Junior Joe Cruz, pictured above during a fundraising campaign, writes that students must be aware of cultural appropriation and racial stereotypes as Halloween celebrations begin.
By Joe Cruz
Published: October 25, 2017

The autumnal season brings with it many cult classics; not only do campy horror films and nostalgic smells and tastes make an appearance at programs and parties, but some of us also consider this an appropriate time to bring out the skeletons we keep in the closet.

These skeletons usually perpetuate discriminatory stereotypes that paint entire ethnic groups in a very narrow and limiting portrait. Ithaca can be a cold place, both in temperature and in collective personality, but this is not reason enough to allow these dated paradigms to persist in the physical and digital spaces we occupy. These cold temperatures bring about an outbreak of illnesses on campus, but also a sickness that I believe can take more time to heal from: ignorance.

In this article, I will focus predominantly on the ignorance associated with matters of privilege, social justice, and politics, both at the federal level and the bureaucracy that is Ithaca College.

Don’t get me wrong, I am incredibly ignorant in terms of the textbook definition. I see myself as a work in progress, and would welcome any person who comes across my views in this piece to feel encouraged to speak further with me on these topics and help build an initial framework to combat these living and breathing matters.

Some might view me and say “he is someone that has clout” and often, I’ve received statements from my close friends along the lines of “But, Joe, you’re one of the good ones” or my personal favorite, “Joe, I don’t even see you as a Mexican.” And perhaps this is valid, as I am not a Mexican citizen, but consider myself a full-fledged Chicano by upbringing and proximity.

It’s a nice, optimistic, downright-naive mindset to say “Ithaca is diverse” or “Ithaca takes issues that affect people of color (and other historically discriminated peoples) very seriously” when there is little evidence by non-identifying members of the community to back up these claims.

I’ve recently understood that the “No More Mr. Nice (brown) Guy” mentality is futile. As a non-black person of color, I automatically benefit from unique privileges and institutions. We have to be willing to meet people halfway, this is more work for us but we have already had to work twice as hard. It’s not my problem, why should I care?

We have to collectively grapple with the proximity and urgency of it all.

Cultural appropriation and reducing the people to surface level characteristics. When black face is committed, we automatically deem these people as racists, no questions asked. But the subtle act of wearing a commercialized version of a traditional serape reduces the customs of a people to nothing more than a technicolored coat.

This spans beyond the Halloween weekend, it is experienced in the daily lives of discriminated groups and made evident in the struggle for memory. The memory of a heritage that emancipates or the memory that enslaves us to surface level characteristics. Perhaps another costume we should take off is that of the white-identifying American middle class. It has been worn as a shield of armor that deflects any social justice issues lacking immediate proximity or connection to the demographic.

However, advertisements, headlines, marketing campaigns, and political rhetoric shows us that issues directed towards especially marginalized communities affect us all, and our ability to wear the costume of an American.

With Halloween just behind us, you probably heard the term “cultural appropriation” at least once.

“My culture is not a costume”

There is a culture of fear here at Ithaca College.

Addressing a community with racism and cultural bias