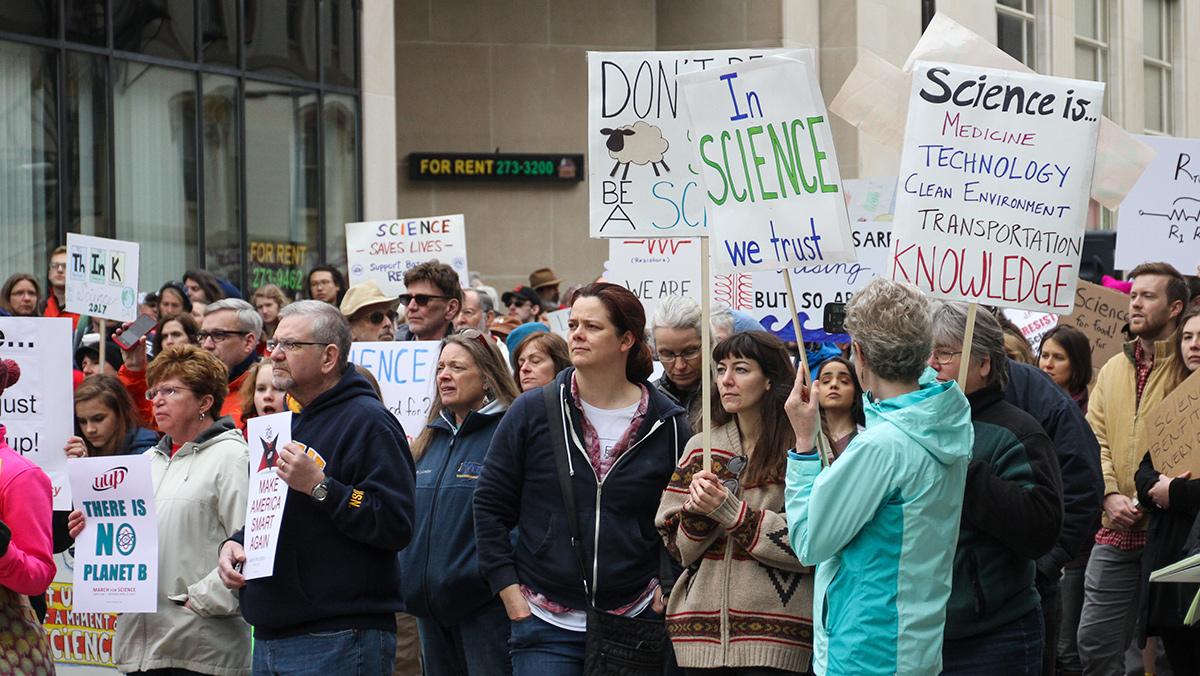 Maxine Hansford/The Ithacan
Ithaca residents gathered on Earth Day last year to support science and ideas like clean energy. Peter Bardaglio writes that clean energy is still on the rise, even during the Trump administration.
By Peter Bardaglio
Published: March 21, 2018

The news so far this year has been dismal: mass shootings, Russian meddling in our elections, rabid political partisanship on Capitol Hill, scandals erupting in the White House, and an opioid epidemic out of control. And that’s just the tip of the iceberg.

There’s a bit of light, however, glimmering on the renewable energy front. When President Trump first took office, it looked like renewable energy would be entering an unremittingly bleak era. His administration has mounted a militantly pro-fossil fuel campaign, advocating policies that are clearly aimed at undercutting the transition to renewable energy. The recent decision to impose a 30 percent tax on solar panels imported from China, in particular, looked as if it would deal a substantial blow to the solar industry.

Surprisingly, though, it doesn’t seem like the expansion of renewable energy can be stopped. As the New Republic points out, “From solar to wind to geothermal energy, the renewables industry is withstanding Trump — and in some cases, it’s doing better than ever.” It turns out that the long march towards a clean energy economy can be hindered but not stopped. Trump simply does not have the power to alter the direction of technological innovation and market forces.

A new report, the 2018 Sustainable Energy in America Factbook, underscores this point. Even in the uncertain climate accompanying the ascension of Trump to the White House in 2017, 18 percent of all electricity in the U.S. was produced by renewable sources, including wind, solar, and hydropower, up from 15 percent in 2016. That, as one energy analyst noted, puts renewables “within striking distance” of the nuclear power sector, which has hovered at 19–20 percent since 2008. Just as impressive, the share of electricity produced by renewables in the U.S. has nearly doubled since 2008, while coal’s share plummeted from 48 to 30 percent.

The dramatic drop in the cost of renewable energy production in the last 10 years has made it competitive with coal and natural gas, and in some cases it’s even cheaper. For example, the price of utility-scale solar dropped 62 percent from 2009 to 2015 and is projected to drop another 59 percent by 2025. Last year, in one of those ironic plot twists that would never make it past the producers if it were a film script, the Kentucky Coal Mining Museum converted to solar power in order to keep its expenses down.

The continued decline in the cost of renewables spells bad news for coal going forward. Solar and wind projects made up about 62 percent of new power construction in 2017 and 2.9 gigawatts of new renewable energy projects were undertaken last year. In contrast, 12.5 gigawatts of coal plants are slated to shut down in 2018.

The rapid expansion of renewable energy production has led to an explosive growth in jobs. Last year the U.S. wind and solar industries employed about 300,000 workers. The wind energy sector provided jobs for nearly 90,000 Americans, 20 percent more than in 2015, and the nation’s solar industry employed nearly 209,000 workers, compared to about 150,000 jobs remaining in coal.

“Imagine,” observes the New Republic, “how well solar, wind, and battery technology would fare if Trump had the same enthusiasm for promoting it as he does for promoting coal and oil and gas.” But then Trump wouldn’t be Trump — that’s the unfortunate reality. In the meantime, however, the renewables march forges ahead.

Ithaca College served as the headquarters for a clean energy summit meant to discuss upstate New York’s energy policies Friday, drawing about 275 students, faculty, staff and businesspeople from the region.