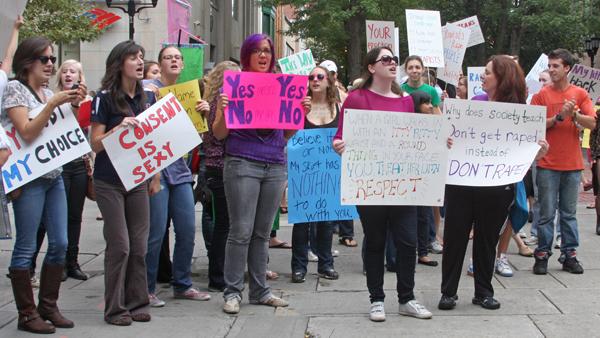 As someone who doesn’t usually watch television at school, I only hear about news through Twitter or from my friends. So a few weeks ago when a coworker asked me if I had heard about Republican Rep. Todd Akin’s comments about rape, I knew I needed to look into it.

Being a women’s studies minor and feminist, I am often asked my opinion on controversies surrounding women’s rights, namely reproductive rights. These issues are what make me so passionate about my minor, especially because they have a direct correlation to my existence as a woman.

On Aug. 17, Fox affiliate KTVI in St. Louis posted an interview with Akin in which he was asked his views about if women who become pregnant because of rape should have the option of an abortion.

Akin was definitely mistaken when he answered, “First of all, from what I understand from doctors, [pregnancy from rape] is really rare. If it’s a legitimate rape, the female body had ways to try to shut that whole thing down.”

Let’s pause for a moment. I’m pretty sure that if there were a way to “shut down” pregnancy without using some kind of pill or device, women would have been using that system for centuries by now. Not only that, but if that was the case, why would women who were raped still be able to contract sexually transmitted infections?

Rape is one of the most violent and invasive crimes. There are no types of rape that are more or less “legitimate” than others. The definition of rape includes force; the person did not want or deserve the action, regardless of whether they were intoxicated, wearing something provocative or have had sex with the offender before.

The American Congress of Obstetricians and Gynecologists recently released a statement about Akin’s comments, labeling them as “medically inaccurate, offensive and dangerous.” They also raised the point that between 10,000 and 15,000 people a year have abortions for pregnancies conceived through rape or incest.

The statement says: “There are no varying degrees of rape. To suggest otherwise is inaccurate and insulting and minimizes the serious physical and psychological repercussions for all victims of rape.”

Besides having written a lengthy research paper on the subject of rape, I’ve also known friends who have been sexually assaulted. I have participated in both SlutWalk and Take Back the Night. I’m appalled that we still live in a society that cannot understand the way basic female biology works. The same people making these comments decide our bodies’ fates.

“I’ve always adopted the idea, the position, that the method of conception doesn’t change the definition of life,” Ryan said in an interview Aug. 23.

The Romney-Ryan ticket has stated on their website that if elected, they plan to overturn Roe v. Wade, the landmark case that made abortion legal in the United States.

Whether they were too young, physically or financially unable, raped, or involved in an incestuous relationship, sometimes it wasn’t the right choice for many women to have a child.

But that’s not all. Pennsylvania Senate candidate Tom Smith made a comment that having a baby out of wedlock is “similar” to being pregnant from rape.

A 2012 Gallup poll stated that 52 percent of Americans think abortion should be legal under certain circumstances and 25 percent under any circumstances, though nearly half of adults consider themselves pro-life. Romney and Ryan want to stop abortion even in cases of rape or incest.

Taking away women’s control of their bodies both brings back painful memories and is against what the majority of women believe. Why hurt them further?

Kaley Belval is a sophomore documentary studies and production major with a minor in women’s studies. Email her at kbelval1@ithaca.edu.