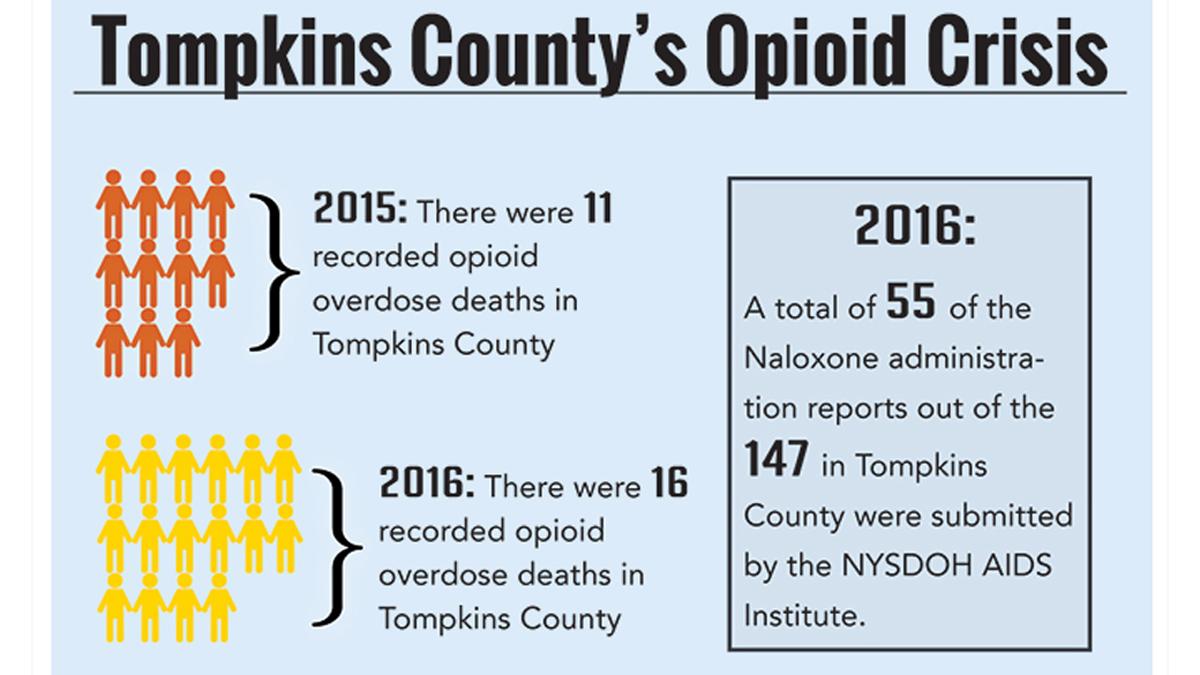 When I initially came to Ithaca College, I was eager to escape from New Jersey, where my eyes had been newly opened to the heroin epidemic that had taken hold of my community. After the overdose of a friend, I wanted to be as far away as I could be from a place so tainted by loss due to this lethal drug. As a student at the college, I was invested in my classes, new friends and the campus community, but after a single click of an article on Facebook, I was awakened to the impact that heroin had on the permanent residents of Ithaca. Little did I know that in coming to Ithaca, I was aimlessly diving into a community suffering from the grasp that heroin held on Tompkins County.

In 2015, there were 11 recorded opioid overdose deaths in Tompkins County — this number rose to 16 opioid overdose deaths in 2016. While these digits may seem small, in a town like Ithaca, with approximately 30,756 residents, this number can have a severe impact. The detriments of addiction can be noted around the community in the proposed plan for a supervised injection facility that has been presented by Mayor Svante Myrick. While this plan has yet to come to fruition, there has been a ripple effect throughout Ithaca to determine what can be done for residents suffering from addiction. The Southern Tier AIDS Program, otherwise known as STAP, is one of the primary resources for those suffering from addiction in the Ithaca community.

With a mission to aid those suffering from HIV/AIDS, as well as prevent those who are at risk, STAP has a needle exchange program to protect intravenous drug users from using tainted needles and to stop the spread of HIV/AIDS and other sexually transmitted diseases. Not only does STAP offer the Syringe Exchange Program (SEP), but they facilitate the Opioid Overdose Prevention Program (OOPP), which I participated in.

Though I am not a user, nor do I personally know users here in Ithaca, I felt that it was important for me to take action in the event in the case that I was to be in a situation where someone was overdosing. Through the OOPP, I was provided with training, a Naloxone kit and a prescription to carry that dispenses the medication in the event of an overdose. Naloxone is a medication that “works by temporarily blocking opiate receptors in the brain, thereby preventing suppression of the central nervous system and fatal overdose symptoms.” By giving someone who is overdosing Naloxone, you are potentially saving their life and giving enough time for trained professionals, like paramedics and EMT’s, to come, in the event that they continue to overdose after the medication has worn off. On record, in 2016, there were a total of 147 Naloxone administration reports in Tompkins County; of those administrations, 55 were submitted by the NYSDOH AIDS Institute. Not all administrations of Naloxone are reported, and it is possible and likely that the number is higher.

I implore the students of the college to educate themselves on the drug epidemic that is sweeping our community yet is sheltered from our eyes. With the number of overdoses that take place here in Ithaca, students should be as prepared as they can be; the training offered by STAP is not out of our reach, and as a community member it is important to look out for the people suffering from this terrible drug. Those addicted to opioids are more than just addicts — they are mothers, fathers, brothers, sisters, nieces, nephews and friends and so much more than their addiction. We must not shelter ourselves or run away from this epidemic like I once tried to — let’s do our best to support the community in which we live and tackle the problem with every resource available to us.

When Ithaca College senior Jon* met Mollie, it was love at first sight. “I’m used to taking Ecstasy a lot, so when my buddy whipped out Mollie for the first time, I just popped it without thinking,” he said. “Once I got jacked up on it, I was set for the night.” Jon said the…