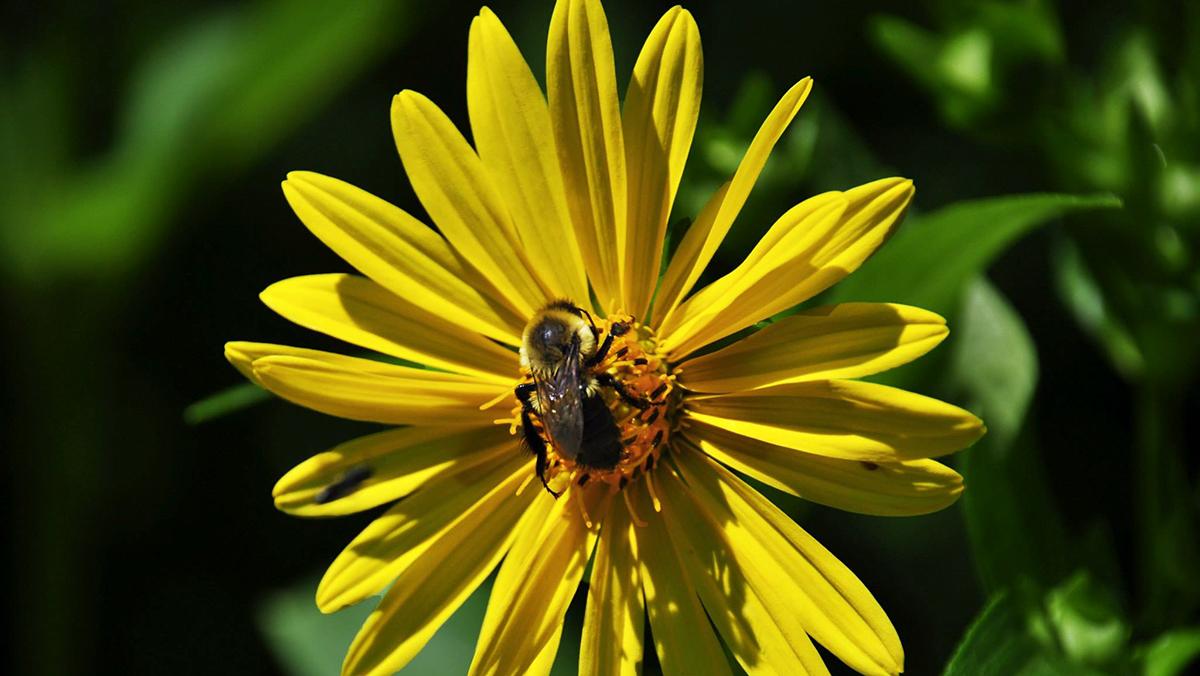 Sam Fuller/The Ithacan
Sophomore Sam Fuller writes about the importance of the pollination from bees to maintain many aspects of the food supply.
By Sam Fuller — Photo Editor
Published: April 5, 2017

We’ve all heard the phrase, “Bees are responsible for one–third of the food we eat.” But what does that really mean? Some foods that are dependent on the pollination from bees are blueberries, beans, grapefruits, strawberries, broccoli, cranberries — the list goes on. These crops are only a few of the many that rely directly or indirectly on the bees’ pollination for their existence or quality.

The 2014–15 season was the second–highest annual loss of bee colonies recorded to date — the total being a 42.1 percent loss. Then, in 2016, 44.1 percent of bee colonies collapsed. The main strain on the population of the honey bee is called Colony Collapse Disorder, where most of the worker bees disappear, leaving behind the queen bee. It is not entirely certain what the cause of this disorder is; however, some factors that play into it are pesticide usage, global warming and a loss of habitat. In September 2016, a bee farm in South Carolina lost 2.5 million bees due to a deadly pesticide usage on the farm. In an effort to stop the Zika virus, Dorchester County used a pesticide called Trumpet, which would kill off mosquitoes, but also honey bees. In this instance, a simple fix would have been to not spray during the early foraging hours for bees and instead to spray during the night to minimize bee deaths.

Also factoring into the bees’ decline is the early blooming of the flowers that bees rely on for food after hibernation. This is due to the overall increase of Earth’s temperature, causing the flowers to appear much sooner than bees are used to. Additionally, the quality of farms today is harmful to bees, as large-scale, commercial farms are becoming the norm — eliminating family farms that use better means of transportation and gentler gathering of honey and that put forth more of an effort to ensure bees are treated in a humane way. This is an overarching issue for farms in general, but it is, in turn, also affecting honey bees.

With the population of the world ever growing, the issue of food supply is extremely pressing. Therefore, the extinction of the honey bee would cause too harsh a blow for humans to handle down the line. Honey bees participate in pollination that is crucial for the survival and quality of roughly one–third of fruits, vegetables, nuts and even animal products. An extinction of bees would eliminate many of the foods farms use to feed their animals, thereby decreasing the quality of their meat and byproducts. Furthermore, U.S. honey bees produce roughly $150 million in honey every year, and eliminating that would cause another issue with the economy.

Now what can we, as everyday people, do to help make a positive impact? Some easy ways are to plant bee–friendly flowers. Recently, Cheerios started a campaign, #BringBackTheBees, for which they sent free flower seeds to anyone who wanted them. However, remember to be mindful as to where you are planting certain flowers, and make sure you are not planting a flower that might be good in California but could be an invasive species in New England. Do research on your area to see which bee-friendly flowers are right for you. Just a few that are beneficial for the Northeast region are sunflowers, lavender, snowdrops and salvias. Furthermore, it’s valuable to know which wildflowers you should allow to flourish throughout the summer months. As much as we love picking them for our vases, leaving behind the dandelions, daisies, coneflowers, sunflowers, black-eyed Susans and marigolds will give a little more back to nature. Additionally, on a larger scale, it is important to be mindful of where you are getting your produce from to promote organic and local farming in opposition to large-scale plantations that overrun the food market. These are all simple tactics but will in turn create a better tomorrow. Not only will the lives of our friendly black–and–yellow insects be affected, but it will determine the future for us as humans.