Commentary: The dilemma of the mainstream news media 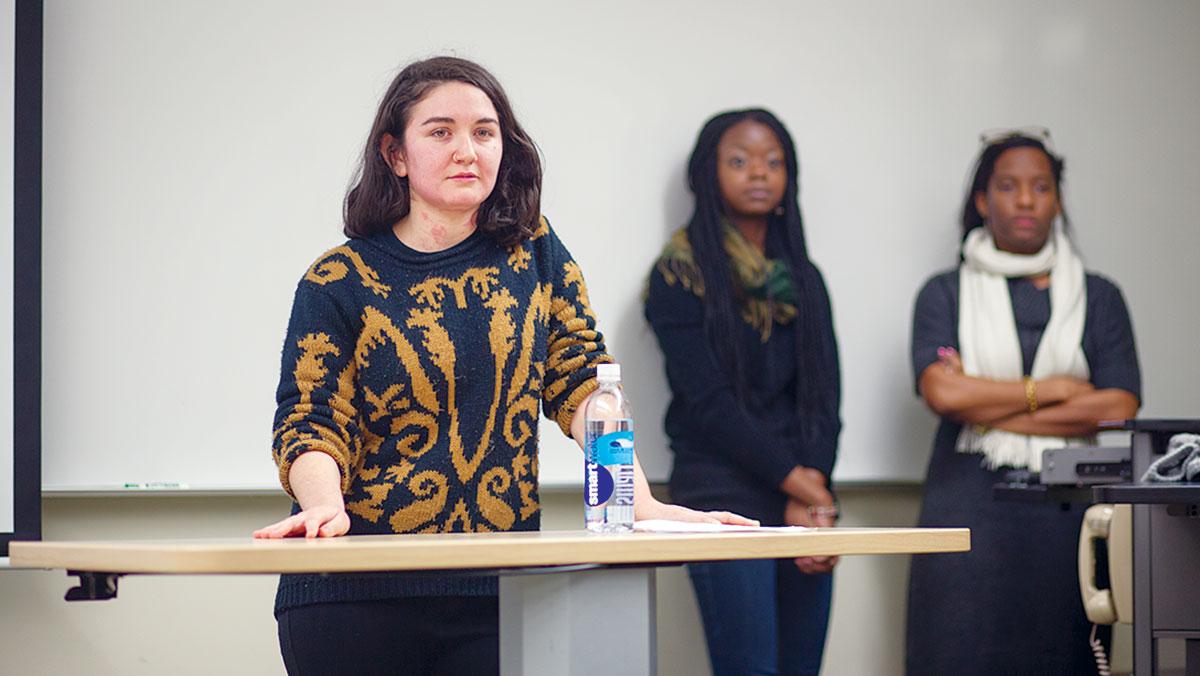 Tucker Mitchell/The Ithacan
Senior Maya Cueva presents Feb. 4 as part of “The Assata Shakur Series” in an event titled, “Deconstructing Media Tropes of Bodies of Color: What Journalists and the Public Need to Know.”
By Maya Cueva
Published: February 18, 2015

Two weeks ago, the Collective, an informal group of students on Ithaca College’s campus dedicated to engaging in critical dialogue around issues surrounding police brutality and systemic racism and discrimination, decided to organize two weeks of events titled “The Assata Shakur Series.” One of our workshops, titled, “Deconstructing Media Tropes of Bodies of Color: What the Public and Journalists Need to Know,” was essential to getting students at the college involved in critically examining the news media they consume. This is especially important living in a generation of short sound bites and video clips, where the news media can directly influence our perception of reality.

On Feb. 10, three Muslim students from the University of North Carolina were shot and killed by a middle-aged white man. Their names: Yusor Mohammad Abu-Salha, Razan Mohammad Abu-Salha and Deah Shaddy Barakat. But their stories were nearly invisible to the general public because of the news media coverage.

In an NBC Nightly News report on the shooting, we learn very little background on the students, and the word choices are problematic. The news reporter describes them as, “Muslims, who’d grown up in America,” as if the two identities must be separate. Instead, their identities are simplified to “three Muslim students” and the cause of their death: a simple parking dispute.

What is rarely acknowledged in most of the news coverage is how the shooting could be considered an act of terrorism prompted by centuries of western Islamophobia that goes back to the unification of Spain that saw the expulsion of Muslims in 1499. Islamophobia is the prejudice or hatred against the religion of Islam, Muslims or other ethnic groups perceived to be Muslim. It reached a pinnacle in the U.S. after the events that took place Sept. 11, 2001.

“Terrorist” became a synonymous term applied specifically to brown people and all Muslims. While the events of Sept. 11, 2001, left a terrible image of planes crashing into the twin towers, what followed was the image of the suspects. Images of brown men of different religious backgrounds began circulating on our news channels and newspapers, prompting every man who looked a certain way or spoke with an accent to be made into a criminal.

Xenophobia appeared permissible, as the Bush regime and mainstream news media outlets justified war using these images and the infamous phrase, “You’re either with us or against us in the fight against terror.” What this dichotomy created for the media and everyone watching was the discourse Mahmood Mamdami stated in “Good Muslim, Bad Muslim”: “unless proved to be ‘good,’ every Muslim was presumed to be ‘bad.’” The horrors of Sept. 11, 2001, became less about the victims and more about labeling Muslim men and women as dangerous on national public television. And while George W. Bush prompted the “fight against terror,” the mainstream news media often supported his efforts by influencing white American fear of Muslim and brown people.

In 2015, our mainstream news reports are still perpetuating dehumanizing images of brown and black people. This is why we should critically analyze and deconstruct the news media we consume. As critical media consumers and creators, we can begin to understand that regardless if there was an argument over parking, the deaths at Chapel Hill are not isolated incidents, but a result of racism toward Muslims reproduced by our own media. Our news outlets should be writing how painful it is to have lost them, not that their deaths should warn Americans of the epidemic of “parking feuds.” Let’s be critical newsmakers, and let’s demand more of the news we consume.

Maya Cueva is a senior documentary studies and production major with a minor in Latino/a studies. Email her at mcueva1@ithaca.edu.