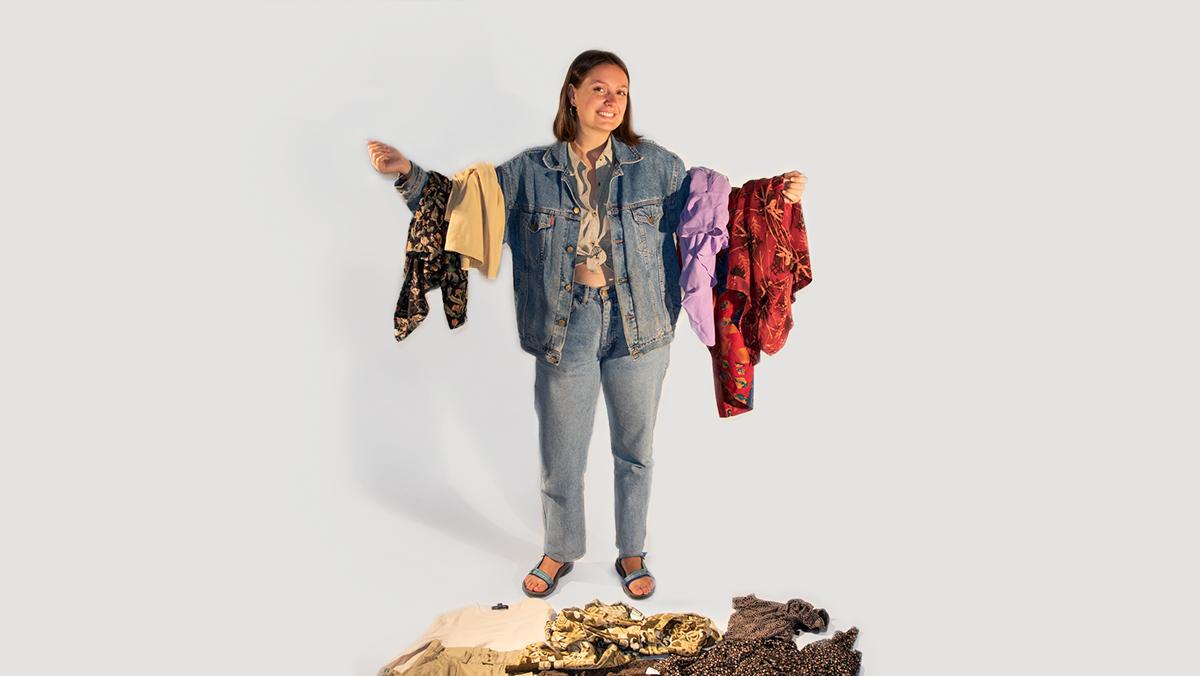 Thrift trends are sweeping the nation. Hippies and hipsters alike spend hours picking through massive bins and swiping through racks of cheap, eccentric clothing faster than they swipe through people on Tinder. Many of my peers, including myself, get a shopper’s high flitting through racks on racks of color-coded sweaters — most of which are older than we are. The endless aisles of clothing contain eclectic, one-of-a-kind gems that have all been previously owned, come with a story and, sometimes, a questionably musty smell.

In the past, thrifting garnered a negative reputation among members of older generations for being an alternative for people who can’t afford brand names. But, somewhere along the fashion lines, it became trendy to wear other people’s used clothing. In recent years, thrifting has become not only a hobby but, for many, a lifestyle. Young people don’t just desire thrift-store looks but also the experience of a never-ending treasure hunt. Thrifting websites and apps like Poshmark and Depop even help people sell their clothes virtually.

There are also many benefits to thrifting in terms of environmental sustainability and ending the capitalistic, consumerist fast fashion industry. In today’s political sphere, in which climate change deniers are in charge and are stripping away environmental rights, like the dismantling of endangered species conservation for oil and gas production, we must become smarter and more sustainable consumers. Thrifting helps reduce the amount of clothing produced through manufacturing, a process that is very taxing on the environment. Synthetic fibers, which are often used in modern clothing designs because they are cheap, require tons of energy as well as crude oils like petroleum. Not only are the gases from these oils polluting our atmosphere, but they are also toxic to breathe in and touch. These materials are easily broken down in the wash, ending up in our drinking water and making clothing less durable. Who knew that thrifting nonsynthetic clothing could be making your drinking water cleaner?

In addition, many well-known name brands such as Forever 21 and Nike hire employees to work extremely long hours in hazardous conditions for next-to-no pay. These workers are typically women and children who do not have access to fair work conditions and education. By thrifting, you are indirectly helping put an end to the fast fashion industry which is built on the breaking backs and cracking hands of the international impoverished.

Thrifting isn’t just ethical from a shopping perspective, but a giving one, too. Donating your clothing to local charities and thrift stores keep them out of landfills and on the backs of people who may really need them. While thrifting is often seen as a fun pasttime among those in our generation, it’s also important we consider the paradoxical nature of thrift shopping being popular among upper- and middle-class young people. For many low-income families, thrift shopping is one of the only accessible ways to get by — and that should not be romanticized. It is always important to be aware of your privilege while thrifting, as it is many people’s only means of obtaining clothing.

However, fast fashion corporations utilize mass production that perpetuates economic inequality, making thrift shopping the most equitable way to get clothes. Ultimately, thrifting is a socially conscious way to shop for less and get unique outfits and can be a fun activity to do with friends.

Take it or leave it offers environmental benefits