Commentary: To Write Love on Her Arms provides suicide support 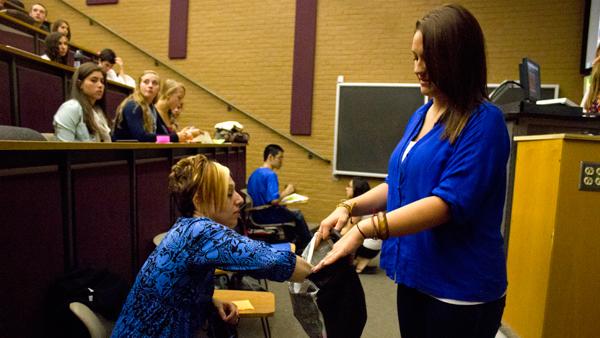 Ritza Francois/The ithacan
To Write Love on Her Arms adviser Alyssa Cooper grabs an anonymous inspirational message written by other students who came to discuss the issues that TWLOHA deals with, such as suicide prevention.
By Desiree Lim
Published: September 12, 2012

College is a place of transition. For some those new experiences are positive, but for others the changes are not always smooth. It is easy to struggle with fitting in and being comfortable in a new environment. Such big changes can lead to feelings of isolation and depression. That is what To Write Love On Her Arms is here for.

This week is National Suicide Prevention Awareness Week, a topic that is increasingly relevant to college students. Nearly one in two undergraduates will become severely depressed at some point during college, according to surveys by the American College Health Association. About 10 percent of students report having seriously considered suicide — it is the third leading cause of death among 15- to 24-year olds.

“What is To Write Love On Her Arms?” is a question I often hear. TWLOHA is a non-profit organization that exists to bring help and hope to those suffering from depression, addiction and self-injury. TWLOHA invests directly into treatment and recovery. The group aims to bring conversation, community and support to those feeling alone and lost.

The story of TWLOHA began in early 2006, when a group of friends helped then-19-year-old Renee Yohe, who struggled with addiction, depression and self-injury, stay sober for five days prior to being allowed admittance into a rehabilitation center. Jamie Tworkowski, one of the friends, penned her story entitled “To Write Love On Her Arms,” posted it online and eventually became the founder of the organization.

The TWLOHA University Chapters program was implemented in 2009. The goal was to reach out to college- and university-aged people during a time of transition. Through an ever-growing network of student organizations on college and university campuses, TWLOHA is working to continually spread voices of hope, inspiration and support for the community.

Ithaca is not unfamiliar with suicide among its large student population. The presence of TWLOHA’s Ithaca College UChapter hopes to shed light on these issues that may sometimes seem uncomfortable to talk about. There is no shame in not feeling OK, no guilt in asking for help. TWLOHA-Ithaca College was one of the first 15 UChapters and has since then held numerous events and activities on campus and in the local community.

But more than just raising awareness, TWLOHA-Ithaca College aims to create a space for people to feel safe and supported. It aims to be a place where you can feel comfortable to talk and where you know you are not alone. It is not about forgetting your problems and what you are struggling with. It is about not having to go through it by yourself, about taking one step at a time with people who care and want to help you get better.

To Write Love on Her Arms meets at 12:10 p.m. every Tuesday in Williams 218. For more information, email twlohaic@gmail.com.

Desiree Lim is a junior theater studies major and member of TWLOHA. Email her at dlee7@ithaca.edu.