Commentary: What voting and Macklemore have in common: feeling glorious 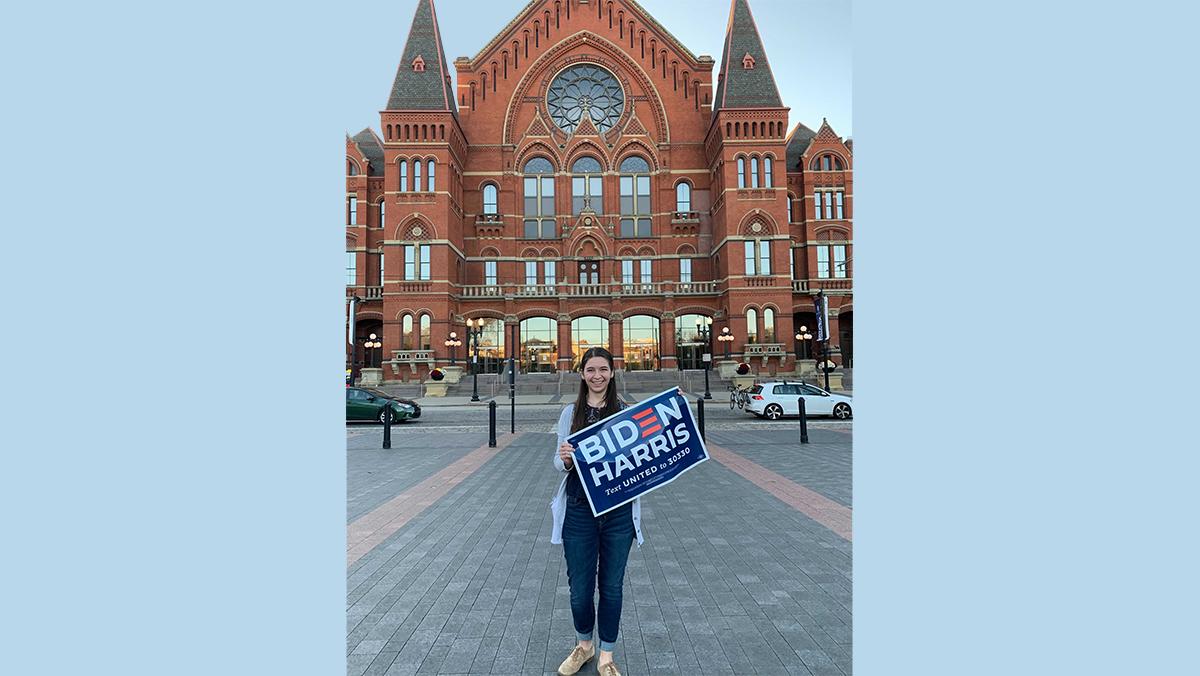 Courtesy of Lila Weiser
Ithaca College sophomore Lila Weiser writes about voting in her first presidential election and what she hopes to see in the future from U.S. President-elect Joe Biden.
By Lila Weiser
Published: November 11, 2020

I’ve played Macklemore’s “Glorious” an embarrassing number of times since Saturday morning, but I feel glorious. The world is ours and we’re going to be all right. The videos of Americans dancing in the streets as if we have just won a great war show me I’m not alone. The war against honesty, democracy and humanity ended when America voted to elect Joe Biden.

My joy comes after four nights of going to bed with my computer open to The New York Times, waking up every few hours to check for updates. It was my first time voting in a presidential election, an opportunity to declare that I had empathy for my fellow Americans, that I wouldn’t let people suffer any more under policies that divided and destroyed America. A way to advocate for my fellow Americans with more than my quiet voice. My vote matters as an amplification of my voice. This election has taught us that every voice matters. When the vote in Georgia comes down to fewer than 10,000 votes, your vote matters. When races are called within a 0.1% voting margin, your vote matters. In local and federal races alike, democracy came through this election with a record turnout. Historically, a vast swath of America hasn’t bothered to vote. Despite everything on the table, voter turnout in the United States lags behind many other countries. I’m disappointed in people’s distrust of our system, yet I also look to the record-breaking turnout we had this year with the hope we will continue breaking records.

Five months after turning 18, in January 2020 I successfully ran to be a delegate to the Democratic National Convention for Sen. Elizabeth Warren. When Warren dropped out, I didn’t hesitate for a second to throw support behind Biden. At that point, I had seen the collapse of respect in the presidential administration in reversing rights for women, the LGBT+ community, immigrants and young adults needing health care. I had seen the administration refuse to agree that Black life matters and instead be a role model to domestic terrorists. I had seen our planet fall apart under an apathetic response to climate change. Months later, I saw more than 230,000 families lose loved ones under a negligent administration.

But by Saturday morning, the world proved to me that America cares about democracy. I have hope that Biden will console an America gripped by fear: fear of climate change, of losing a loved one, racial injustice, losing access to birth control or being denied the right to marry. He won’t do this perfectly. I already criticize his climate plan for not being radical enough in the face of a radical issue. I fear that America is too entrenched in fear for any of his plans to be effective. There are right-wing extremists in the 117th Congress representing the same America that voted for Biden. I, with many others, will be looking to Biden to see if our country can effectively come together. While it pains and shocks me that 70 million people unapologetically voted for a right-wing authoritarian, it just reminds me that my fight continues.

My fight started when I was 15 and went to the Women’s March on Washington, D.C. On Saturday, I breathed, and I cried from joy and I danced in the street to Macklemore’s “Glorious.” On Sunday, I got back to work fighting for our country.