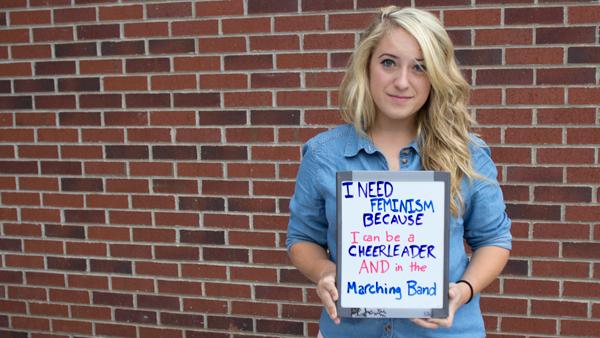 Shawn Steiner/The Ithacan
Senior Brennin Cummings based her “I need feminism because” whiteboard message on the stereotypes in the Taylor Swift song “You Belong With Me.”
By Brennin Cummings
Published: September 26, 2012

Last week, the Ithaca College Feminists group planted themselves on the academic quad with a few whiteboards with the phrase “I Need Feminism Because…” written across the top. The purpose? To get people talking about the need for feminism and start a dialogue that includes women and men.

The “Who Needs Feminism” campaign was started on Tumblr by a group of Duke University undergraduate students who realized that there was too much apathy toward the subject of feminism. People assume feminists are unshaven man-haters who want women to rule over men rather than have equality between the sexes. Almost more troubling, the group found that too many people think we live in some sort of post-sexism world.

The truth is, we don’t. In a time when legislators are attempting to block women from getting birth control, and women are still paid 70 cents for every dollar a man makes at the same job, feminism is more important than ever.

The thing that was so encouraging to me while watching the IC Feminists participate in this campaign was the enormous diversity of the people who came to share their reasons: muscular football players, girls with dreads and gauges, stoner dudes and girls in dresses and heels. It just reinforced the point of the campaign. It doesn’t matter who you are — outdated gender roles hurt all sexes and all types of people.

Some participants were enthusiastic and already had a reason in mind. Some were too daunted by the word “feminism” or scared because of misconceptions about feminism. What was great to see was that some students stopped by and wanted to participate, but weren’t sure what to write. Seeing people stop to consider and articulate why equal rights were important to them opened up discussions about feminism and got me thinking about my own reasoning. Even though it was a small event, it got people talking and sharing their stories.

In society, femininity, or being girly, is depicted as weakness. Often we as women try to distance ourselves from femininity in an attempt to look stronger. We say we’re “different from other girls” because “other girls” are obviously silly and stupid, and we’re obviously smart! We say, “I don’t really have any girl friends. I just hang out with guys! No drama!” Women have internalized the idea that we’re weak and we will do anything to separate ourselves from womanhood, even when that includes feminism.

I used to think the same way, unfortunately. Then I realized that I couldn’t sit here and pretend to be a feminist, while at the same time tearing down girls. I grew up with some amazing female role models — my mother and my grandma — who showed me how to be resolute, courageous, hardworking and kind. I absolutely knew better than to think women are weak; I was raised by the strongest women I know.

So here’s my reason:

I need feminism because I’m sick of girl-on-girl hate. We don’t live in a Taylor Swift world. There aren’t “cheerleaders” and “nerds” or “sluts” and “virgins.” There are just girls, and the second we stop tearing each other down based on clothing or sexual activity, we can start building each other up and present a solid front against a society that doesn’t think we can make our own decisions. The notion that girls are silly or weak is nonsense and we know it. So let’s transcend the stereotypes and reclaim feminism. Once we realize and acknowledge why feminism is important to us all, we can fight for equal rights together.

Brennin Cummings is a senior journalism major. Email her at bcummin1@ithaca.edu.