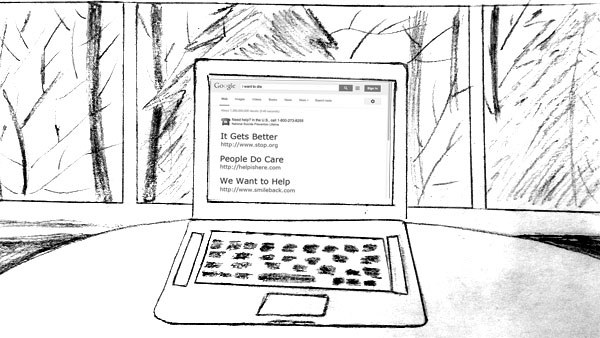 Patrick Feeney and Deanna Romanoff
By The Ithacan
Published: January 29, 2014

Ithaca College Active Minds has launched a petition to increase mental health resource visibility on Google. It proposed a style similar to Tumblr, in which a window listing resources pops up when a user enters a self-harm or suicide-related term Active Minds identifies in its petition. Though some express concerns of censorship, this setup could help countless people with mental illness.

Google has been criticized in the past for its PageRank algorithm. PageRank measures and lists links in order of relevance. As a result, certain links are relegated to distant pages and low traffic. Websites like Kinderstart.com filed lawsuits for having their URLs exiled in searches. Filtering self-harm websites or adding  a pop-up window may replicate problems that led to these lawsuits.

The Active Minds list also needs different levels of distinction for different terms. Someone who searches for “abuse,” for example, may be trying to report abuse or research it for academic purposes. A filter may prevent access to vital information. By contrast, a search for “I want to die” clearly indicates the person’s intent to end his or her life.

However, the interruption of a pop-up window may cause second thoughts. Suicides have often proved to be impulsive — though mental illness is long-term, a moment of anguish could lead a person to suicide. An interruption can help the impulse pass forever. A study conducted in the 1970s found that of 515 who were talked out of suicide in San Francisco, only 6 percent ever tried again.

If Google accepts the petition, it should consider both the intents of users and the dangers of censorship. But the chance that the pop-up window may prevent suicide justifies the inconvenience to others searching self-harm terms.