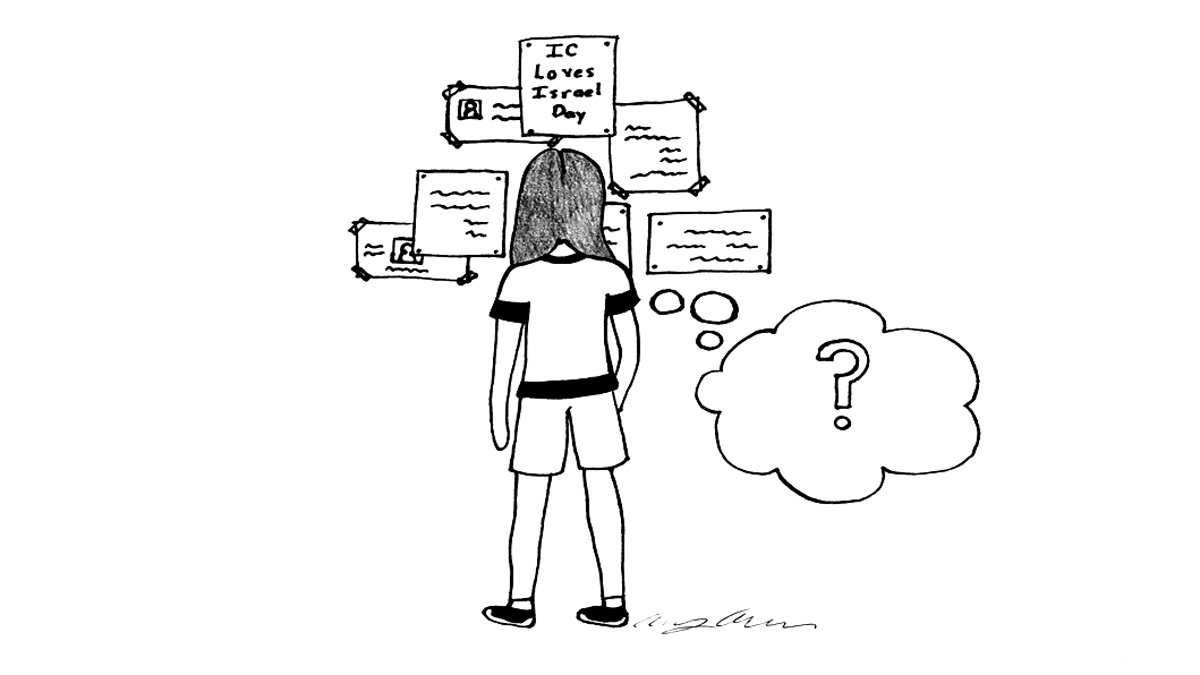 The Student Alliance for Israel will be hosting Ithaca College’s first “IC Loves Israel Day” on April 28. The event is intended to be a celebration of Israeli culture and will include traditional Israeli dance, music, games and food. Several other organizations on campus, like IC After Dark and Project Generations, will also be tabling and providing activities at the event.

Sophomore Orian Fitlovich, one of the event’s co-planners, said the event is meant to exist outside of Israeli politics and simply be a celebration of the nation’s culture. This event is a well-intentioned opportunity for students to engage with another culture, and the campus community should feel encouraged to participate in it. The event’s co-planners also said the beginning of the title, “IC Loves,” is more indicative of the event’s location than any beliefs or sentiments the college holds.

However, while the title is not intended to convey any political views, its current wording is open to misinterpretation. The title of the event seems to be indicating campuswide support of Israel as a nation, rather than Israeli or Jewish people. The latter is a necessary and encouraged sentiment toward one of the college’s many ethnic or religious groups, whereas the former is speaking on behalf of the campus community regarding its stance on a controversial, nuanced issue. While this may seem like a small and inconsequential distinction in the title, some students have already voiced their concerns about the college’s seemingly throwing its support behind the controversial nation-state.

Although the event is not intended to endorse the state of Israel, the title of the event will not be interpreted by many students without that context. Israel’s policies regarding Palestinian people — including many abuses like the destruction of property, the shooting of nonviolent protesters and the deprivation of resources — have been a source of contention on campuses across the United States for decades. This contention resulted in the Boycott, Divestment and Sanctions movement against Israel, a movement that works to end international and colleges’ support of the nation’s oppression of Palestinian people. As a result, colleges have been feeling pressure to divest from companies involved or complicit in Israel’s violation of Palestinian human rights. Others are calling this movement inherently anti-Semitic and saying that it disregards the cultural importance Israel has for many Jewish people. This is inarguably an extremely tricky topic to navigate and discuss — which is why an ill-conceived title of an important event like “IC Loves Israel Day” can distract from the importance of this event and instead flare tensions.

Students at Cornell University are currently grappling with their own BDS movement. These factors in the surrounding community contribute to the delicate atmosphere surrounding Israeli-Palestinian politics, a climate that means any event or statement even potentially correlated to it should be handled with great care.

Although there is no current BDS movement on our campus, that is not to say the contention surrounding the Israeli-Palestinian conflict does not exist at the college. The Ithacan has received and published three opinion pieces raising concerns about the Israeli-Palestinian conflict this academic year alone. Given that the issue upsets so many students, generalizing that the entire college loves the nation at the center of this debate is a misrepresentation of the campus community, one that should be addressed regardless of how unintentional it was.

Celebrating all cultures and heritages is vital to our diverse campus community and events geared toward doing so should happen more often. Israeli and Jewish students need and deserve a space where they can unabashedly celebrate their ties to Israeli culture, and this event is providing a much-needed space to do so. This is ultimately a full-hearted event dedicated solely to celebrating Israeli culture, and that premise should not be taken away from it. However, moving forward in the event, its organizers should keep in mind different students’ perspectives on the nation and present the event with more delicacy and accuracy.