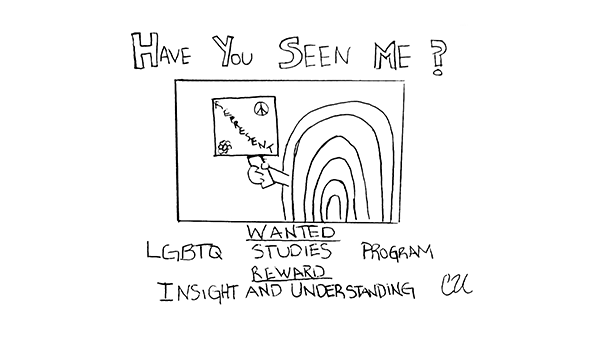 Ithaca College strives to portray itself as an LGBTQ-friendly campus. Yet despite being ranked among the top 25 LGBT-friendly colleges by the Campus Pride Index, it does not offer an LGBTQ-oriented academic studies program. Through the Student Government Association unanimously passing a bill that calls for the creation of an
LGBTQ studies minor, students are demanding a representation of queer studies in their education.

The power of student activism was proven when students pushed for the Asian American studies minor. As it was last year with the implementation of the Asian American studies minor, the administration is being reactive rather than proactive when creating fields of academic studies geared toward educating students on the politics, history and identities of underrepresented demographics.

The college may face logistical difficulties such as financial costs and finding professors to teach the minor. However, there are several courses that the college already has to work with, such as “Sex, Gender and Desire” and “Gender Issues in Sport.” There are also professors already teaching LGBTQ-related issues in departments across campus.

It would be hypocritical for the college to present itself as being accepting to people in the LGBTQ community but not have a program allowing them to study the history and politics revolving around their identities. For the sake of filling in the gap in many students’ educations when it comes to LGBTQ studies, it is in the administration’s best interest to work with students in devising and launching a minor program that aligns with its image of being an LGBTQ-friendly campus.