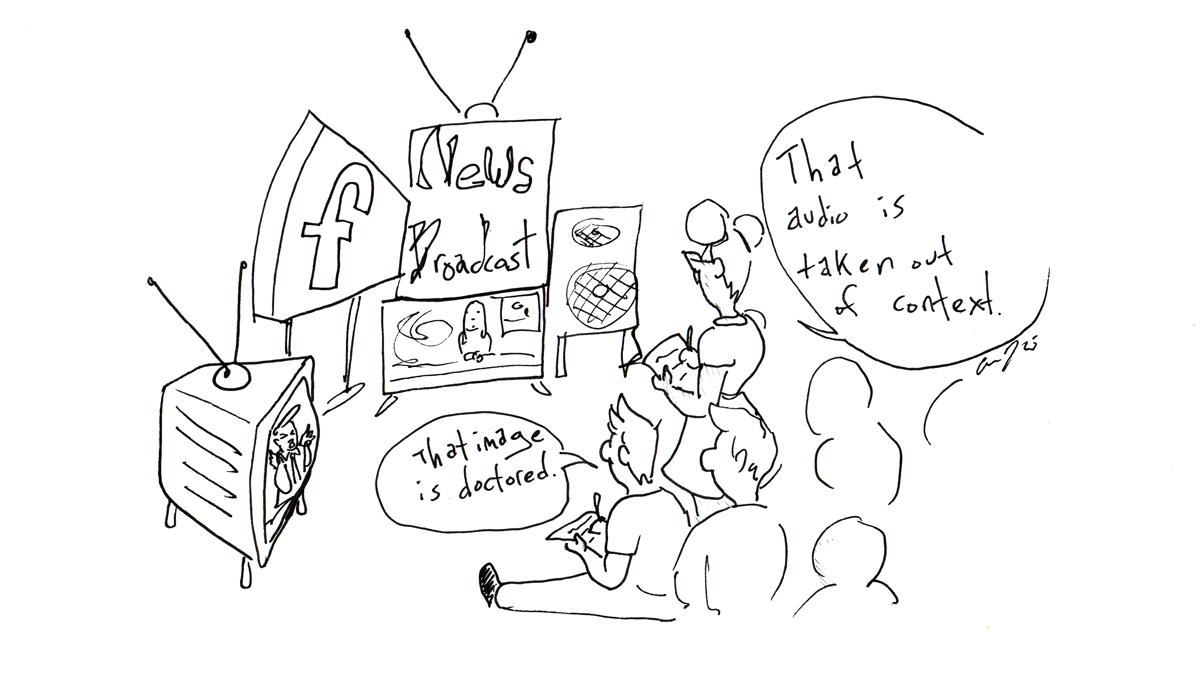 For Fall 2019, Ithaca College’s School of Humanities and Sciences has approved a new media literacy minor. The new interdisciplinary minor was coordinated by Cyndy Scheibe, professor in the Department of Psychology, who has been advocating for the minor at the college for the past decade. While the college has offered courses on media literacy in the past, the minor is the first official program of study for media literacy at the college, requiring students to complete 18 credits and an e-portfolio for it.

Americans began paying more attention to media literacy and pushing for it to be taught in schools after the election of U.S. President Donald Trump, while European and Canadian schools have been teaching it for approximately 30 years. Social media had a significant role in influencing the 2016 election results — many people believe public opinion during the election was swayed due to the spread of false media online. Trump himself has also regularly referred to unfavorable reporting of his actions as “fake news,” inciting a newfound interest across all political parties in determining what media can or cannot be trusted.

Trump’s presidential campaign and election are ultimately what brought fake news to the forefront of American public awareness. As fake news and its objectives of spreading radical rhetoric and ideologies became more well-known, people began to realize they did not have the skills to distinguish between farcical and legitimate media. With that realization came the push to educate people in American schools about how to select credible media to consume. Considering radical ideologies are on the rise around the world, their supporters often targeting young adults through social media, teaching media literacy to young adults is perhaps more crucial now than ever.

Another vital part of media literacy is understanding journalists’ roles in media and how their work impacts the general public. In recent years, many people have come to believe that all journalists are biased, inaccurate reporters. However, journalists’ true role is to act as an additional check on political and social action, a role that has led to them being attacked by opposing social and political groups. Incidents like the “Rope. Tree. Journalist.” T-shirts and various bomb threats called against newsrooms serve as an indicator of some Americans’ beliefs about journalists. Due to the rise of false, editorialized media, the perception of journalists is shifting from an impartial fourth estate to an enemy with a personal agenda.

This perception has severe ramifications not only for journalists but for the public as a whole. If the people who are responsible for creating reliable media cannot do so safely, the amount of said accurate media available will only dwindle, resulting in an increase of fake news. Considering the college’s extensive media-based programs in the Roy H. Park School of Communications, it is encouraging to see it treat this matter with the appropriate gravity by implementing a media literacy program.

The college is an institution that prides itself on and is renowned for its media programs. The Park School is known for providing vital education and experience in journalism, television and radio, emerging media and many other fields associated with creating media. Although the media literacy minor is officially a part of H&S, it will undoubtedly benefit any student studying the previously mentioned fields and beyond. Farcical media is one of the largest worldwide crises in media today, and an individual has to be equipped with adequate tools to combat it if they want to be an informed citizen.

Ultimately, this minor is a much-needed addition to the college, and the college should ensure that the program is fully utilized and supported in the coming semesters. If the college wants to maintain and build its reputation as an institution that provides cutting-edge material for its students, it must continue to take into consideration what fields and added courses are most relevant in today’s political, media and social climates.